Forgotten River Will Get a Walkway 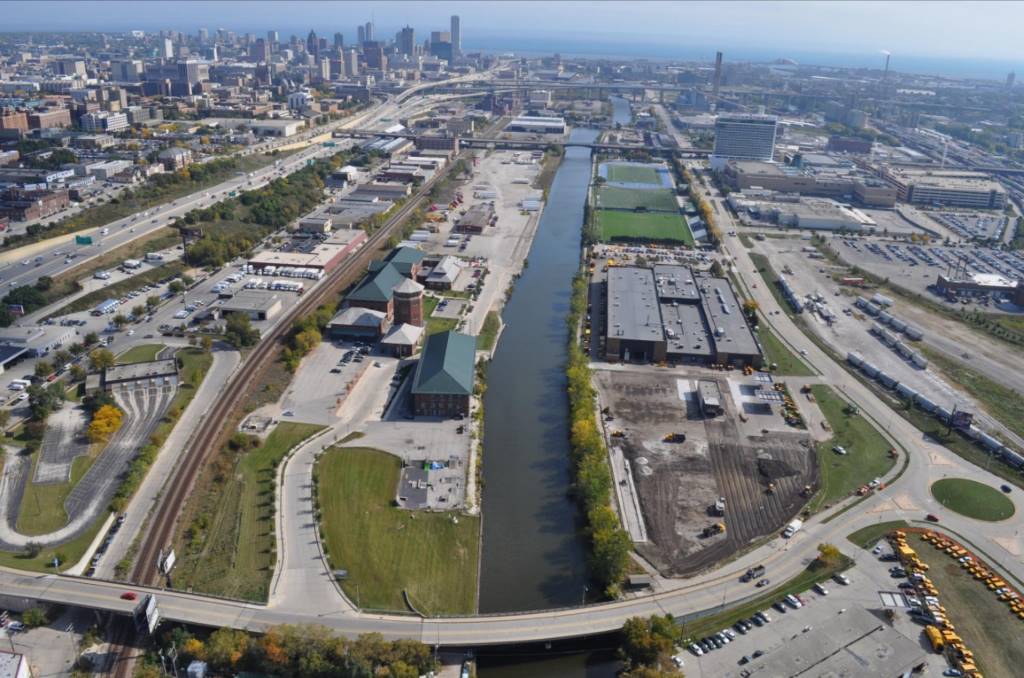 The Milwaukee RiverWalk is about to get a lot longer. The Common Council’s Zoning, Neighborhoods & Development Committee gave a unanimous thumbs-up to a two-mile long extension of the system through the Menomonee Valley.

The extension will run along the Menomonee River from the river’s confluence with the Milwaukee River near N. 2nd St. to the 27th Street Viaduct and Three Bridges Park. That’s an approximately two-mile long corridor with the riverwalk planned for each side.

Until recently that corridor has been overlooked. Menomonee Valley Partners executive director Corey Zetts told the committee “When this whole process started over 20 years ago people really felt like the Menomonee River was a forgotten river.”

Like the Menomonee Valley’s redevelopment before it, the valley riverwalk has few peers. Department of City Development project manager Bob Harris previously told the City Plan Commission that the city was unable to locate any riverwalks being constructed in primarily industrial corridors.

The approval today won’t immediately trigger construction of the new riverwalk. Harris noted that approving the overlay and design standards for the riverwalk are simply the first two steps in a four-step process. Next steps include stakeholders selecting a funding mechanism and creating easements to ensure public access.

Don’t expect the Menomonee Valley riverwalk to look like the current one. The Menomonee Valley is largely an industrial area and according to Harris the city has no intent to change it. Said Harris: “I think the vision is essentially that is will be a landscaped sidewalk along the riverwalk.” This design standard can already be seen in the segment that is effectively in place via the Hank Aaron State Trail extension that runs along the river near the city’s Department of Public Works facility and Marquette University‘s Valley Fields complex.

Design standards for the district mandate that the new riverwalk segments must be at least 12-feet wide and open 24 hours a day. They must comply with the Americans with Disabilities Act standards.

The design standards also include landscaping designed to improve the environmental health of the river by reducing run-off through the use of permeable pavements, bioswales and native plantings. 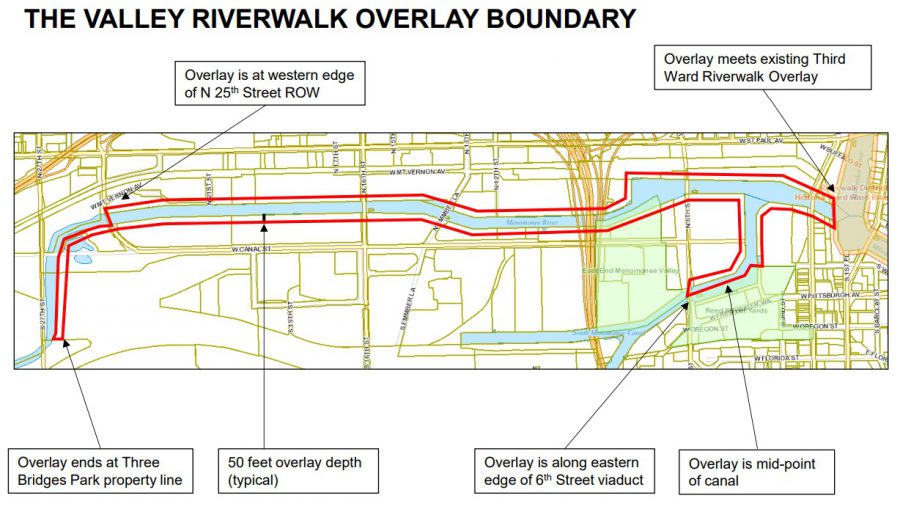 Zetts noted there is considerable interest in the project: “It was a common suggestion from stakeholders and property owners, so we feel really excited that its moving forward,” she said. The project was identified as part of the group’s recent Valley 2.0 effort.

To determine how to move forward area property owners and Menomonee Valley Partners must next decide on their desired financing scheme. Two options are available.

The first option is the method used by much of the downtown system where new riverwalk segments have been constructed individually as properties are developed or redeveloped. The second option is one used for much of the Historic Third Ward where a business improvement district was loaned money by the city to build the system up-front and then repaid it through a special assessment.

Under either scenario the city’s standard riverwalk financing system would be in place where the city pays for 70 percent of the riverwalk’s cost and 50 percent of any dockwall repairs.

The final step in the process is securing easements to ensure public access to the riverwalk in perpetuity.

The project will go before the full Common Council later this month.

Even with council approval some segments of the corridor aren’t likely to see a riverwalk for generations, if ever. A gap will remain for the We Energies substation that is along the river across from the Valley Power Plant. In addition, there are a handful of parcels owned by Canadian Pacific Railway that aren’t likely to see riverwalk segments.

The existing portion of the six-mile Milwaukee RiverWalk, a project which began over 20 years ago, is now 83 percent complete. That total will increase soon with the completion of new segments including the DoMUS apartments, Trestle Park and River House apartments.

The city has invested $52 million in the project to date and reports that adjacent properties have generated a $1 billion increase in property values since construction began.

6 thoughts on “Eyes on Milwaukee: Forgotten River Will Get a Walkway”