There's already a lot to see inside the biggest construction site in town.

We’re still over a year from the Milwaukee Bucks opening their new arena, but much of the massive, $524 million complex is already taking shape. Standing inside the main lobby at the building’s eastern edge, escalators are being installed all around you, the seating bowl of the arena is visible as you walk forward and if you look up the elevated Panorama Club bar deck is now sticking out of the side of the building.

Construction work on the arena, which runs along the south side of W. Juneau Ave. from N. 4th St. to N. 6th St., is being led by Mortenson Construction. The firm, which has a division specializing in stadium construction, counted 629 workers on site the morning of the tour. Of that number, many work for various sub-contractors and include more than 250 previously un- or under-employed city residents that are participating in the city’s Residents Preference Program. As part of the financing package for the arena the team is required to hire a significant number of RPP participants. They’ll have plenty of opportunity to increase the number going forward as Jeff Maples, senior project manager for Mortenson, notes the total number of workers on site will peak at around 900 later this summer.

The team anticipates having the building’s exterior “weather tight” by the end of November. To enclose the 714,000 square-foot building the construction team is currently installing the massive trusses to support the roof. Four of the nine primary roof trusses have been installed.

The tour of the construction site included a stop at the space that will soon be the team clubhouse. The locker room complex in the new arena will measure almost 30,000 square-feet according to team president Peter Feigin. This includes a number of auxiliary rooms, including one for the media. During a tour of the space Feigin noted “this will be one of the really special areas.” At the very least it will be a lot bigger, as the current locker room complex measures in at around 7,000 square-feet. The auxiliary locker rooms for opposing teams and other performers also will see substantial upgrades. Feigin noted “we’ve actually made the decision to make them nice.” That will help the team when they go on the road as they’ve been jokingly assigned to closets in other arenas in response to the small visiting locker rooms in the BMO Harris Bradly Center.

Construction work has yet to begin on the “Live Block” component of the development. Does that panic the Bucks? Not according to Feigin who stated “we can’t be more pleased with the timing.”

He has at least one key reason to be pleased. The team will move into their new $30 million training facility, known as the Froedtert and Medical College of Wisconsin Sports Science Center, this month. That facility is just west of the new parking garage and was built by J.P. Cullen & Sons.

The arena is being designed by a partnership of Populous and Eppstein Uhen Architects. ICON Venue Group is serving as the Bucks’ owners’ representative on the project. The project is scheduled to be completed in time for the 2018-2019 NBA season. 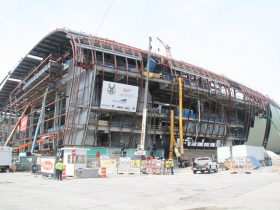 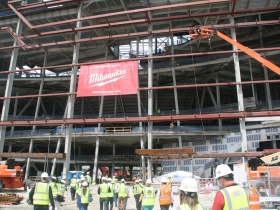 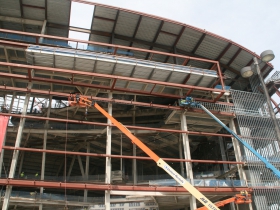 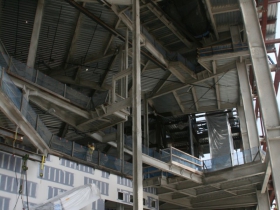 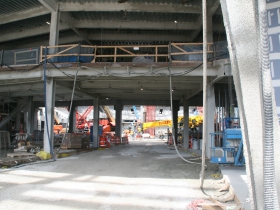 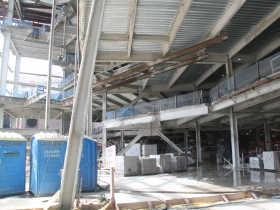 On a tour of the site, Feigin praised the design of the new 1,243-stall parking garage. The team president stated “most parking structures are concrete monstrosities.” Not this one, he notes: “this will actually be an aesthetically pleasing parking structure, which is hard to do.” Realizing that vision will in turn depend on the successful completion of the 107-unit Park 7 Lofts apartment building.

The building, which would be built on the western edge of the structure along N. 6th St., recently received design approval from the Common Council. Construction on that project won’t start until after the parking structure is completed.