Other than Brown Deer and Glendale, suburbs are overwhelmingly white.

By Edgar Mendez, Milwaukee Neighborhood News Service - Jun 27th, 2017 11:25 am
Get a daily rundown of the top stories on Urban Milwaukee 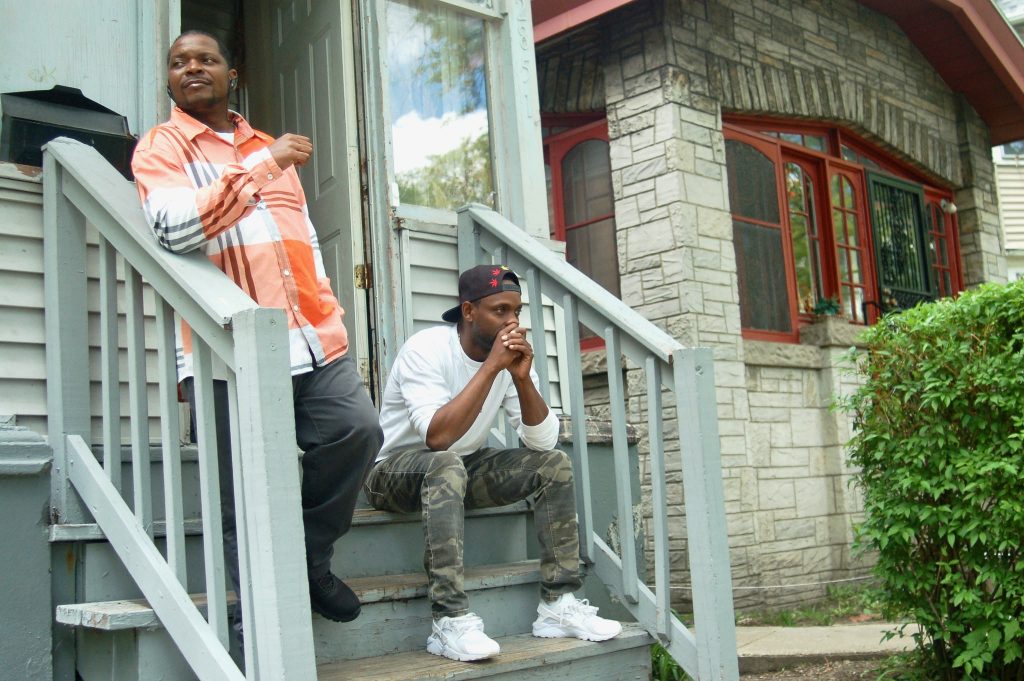 Oscar Manuel (left), 46, and his brother Roosevelt Manuel, 43, have lived on Milwaukee’s North Side their entire lives. Photo by Edgar Mendez.

For 200 consecutive days, advocates including Vel Phillips, the Rev. James Groppi, the NAACP Youth Council and hundreds of African-American residents led a push for open housing that took marchers north to south, across the Sixteenth Street Viaduct and onto what is now known as Cesar E. Chavez Drive. August will mark the 50th anniversary of Milwaukee’s Open Housing Marches, which sparked the passage of a municipal open housing law — one with more teeth than the federal and state laws in place at the time — and along with it the promise that the city’s housing would one day be integrated.

That hope is stale now, as Milwaukee continues to hover at or near the top of lists that measure residential segregation in U.S. metropolitan areas. That won’t surprise most Milwaukeeans, who’ve grown accustomed to neighborhoods nearly void of black/white diversity.

“The only time you see Caucasians in the neighborhood is when they’re riding through in their cars,” said Roosevelt Manuel, 43.

Manuel, who works in construction, lives on North 17th Street in the 53206 ZIP code. According to 2011-15 estimates from the American Community Survey, conducted by the U.S. Census Bureau, the 53206 ZIP code has 25,179 African-Americans residents and 632 whites.

While African Americans have, in increasing numbers, moved to the near South Side neighborhoods that activists marched into 50 years ago, those neighborhoods are no longer white; they have been populated mainly by Hispanics for decades. White and black Milwaukeeans remain segregated.

There are many reasons why Milwaukee’s segregation continues to fester like an infected wound, according to researchers, housing policy analysts, community leaders and residents. They include fair housing ordinances that continue to be difficult to enforce; the impact of historic discriminatory policies such as racially restrictive covenants, redlining and other unfair lending practices; freeway projects such as the construction of I-43 that facilitated white flight and isolated central city neighborhoods; and the unwillingness of suburban Milwaukee counties to provide affordable housing options or welcome non-white neighbors, according to Reggie Jackson, head griot at America’s Black Holocaust Museum, and others.

Combine those factors with the collapse of industry in Milwaukee, which limited social mobility for the city’s suddenly exploding low-income population, and the end result is “little progress over the last 50 years, when it comes to ending segregation,” Jackson added. 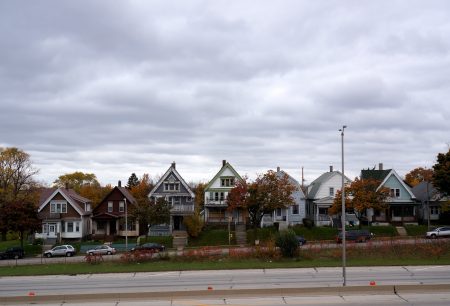 Houses on the 3300 block of North 8th Street are similar to the North Side homes razed to build I-43. Photo by Adam Carr.

Referring to the lack of affordable housing options in the suburbs, the Rev. Willie Brisco told a crowd gathered for a Community Brainstorming Conference in April, “What they’re telling us … is, ‘We want your labor but we don’t want you around our homes or around our children.” Brisco is president emeritus of Milwaukee Inner-City the Congregations Allied for Hope (MICAH).

According to Jackson, who has conducted research on segregation, 91 percent of blacks in the Milwaukee metro area live in the city of Milwaukee, while 58 percent work there.

“The suburbs won’t build enough housing to accommodate residents of the inner city who work there because they don’t want us there,” said Manuel.

Dr. Marcus Britton, an associate professor of sociology at University of Wisconsin -Milwaukee, said across the nation, housing segregation has decreased slowly, but substantially. Though areas in the Midwest and Northeast have seen less progress, Milwaukee remains an outlier even among them, Britton said.

“Progress has been slower here. The Milwaukee metro area has the lowest rates of black suburbanization,” Britton explained. In other metro areas, segregation is more likely to be based on income level, but in Milwaukee, that’s less the case, he added.

“Even blacks that have more resources are more likely to live in a low-income neighborhood than poor whites,” Britton said.

The result of racial inequities due to segregation is devastating. African-Americans living in segregated neighborhoods are more likely to live in poverty, leading to the social ills — lower educational attainment, mass incarceration, teenage pregnancy, increased exposure to violence and other negative health consequences — that accompany it, he said. .

Black neighborhoods are also more likely to have polluting facilities and failing schools, Britton added. In late March, North Side residents gathered at Jerusalem Missionary Baptist Church, 2505 W. Cornell St., to voice concerns about the mishandling of hazardous chemicals by a local drum refurbishing company. During the meeting, 74-year-old Ruby Snowden, who lives near Lloyd Barbee Montessori School, said, “You know, it’s benign neglect. It’s about the haves and have-nots.”

Sitting in a coffee shop in Sherman Park, Jackson recalls a much more hopeful Milwaukee. 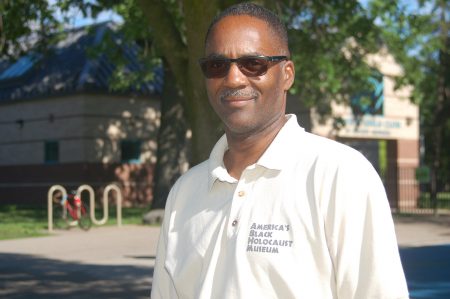 “When I grew up in the 53206 neighborhood it was thriving. The impact of segregation and the crashing economy was the perfect storm,” said Jackson, who gives presentations around the city about the subject. His audiences are typically very diverse and typically lack a full understanding of segregation in Milwaukee, he said.

“People aren’t paying attention to how we got to where we are now. The level of distrust between communities because of segregation has gotten us to the point where people don’t even recognize the need to live in diverse communities,” Jackson said.

Manuel agrees. “When Caucasians come to the North Side, they’re scared to get carjacked and when we go to the suburbs we’re scared that we’re going to get arrested and go to prison,” he said.

Federal policies meant to integrate neighborhoods across the country, including Milwaukee, have never fully succeeded, according to Kori Schneider-Peragine, a senior administrator of the Inclusive Communities Program at Milwaukee Metropolitan Fair Housing Council (MMFHC). The often-ignored aspect of the federal Fair Housing Act of 1968 is that cities were required to proactively reverse residential segregation, Schneider-Peragine said.

A new regulation meant to enforce that promise, “affirmatively furthering fair housing,” was adopted in 2015 by the U.S. Department of Housing and Urban Development (HUD) under the Obama administration, but is currently in jeopardy, she added. It required cities and towns that receive federal funding to examine their housing practices by utilizing publicly available data and other tools to uncover bias based on race and other factors. The grantees are to utilize the findings to set priorities and goals to meet longstanding fair housing obligations.

“There is no fair housing. They won’t build affordable housing in the suburbs so a lot of people end up stuck here without access to good jobs,” said Linda Wheeler, 55, as she stood on her faded red porch on West Center Street in the Lindsay Heights neighborhood.

Though policy changes can address the lack of affordable housing in the suburbs, it will be more difficult to end covert discrimination, Schneider-Peragine said. “You used to be able to tell someone to their face, ‘I don’t want to rent to you,’ but now you smile and tell them nothing’s available,” she added.

The mission of the MMFHC, where Schneider-Peragine has worked for 19 years, is to promote fair housing in the state by combatting housing discrimination. The council conducts investigations utilizing faux renters with similar income levels, but differing racial, gender or other characteristics to uncover discrimination. The organization also investigates claims of unfair lending practices and provides trainings on fair housing regulations for housing providers and others.

In recent months there has been an increase in hate crimes and other aggressive actions reported to the council, according to Schneider-Peragine. “Lately it’s been not so subtle,” she said.

Unfortunately, according to Jackson, the Fair Housing Council doesn’t have enough staff to investigate all the instances of unfair housing practices, nor are most of them reported. With limited incomes and housing options, residents of Milwaukee’s central city are likely to remain where they grew up or nearby, he added.

“If communities are discriminating in housing they should lose funding,” Jackson said. “Segregation didn’t happen organically; it was created.”

2 thoughts on “50 Years After the Marches: Residential Segregation Still A Problem”