By Jabril Faraj, Milwaukee Neighborhood News Service - Jun 23rd, 2017 11:37 am
Get a daily rundown of the top stories on Urban Milwaukee 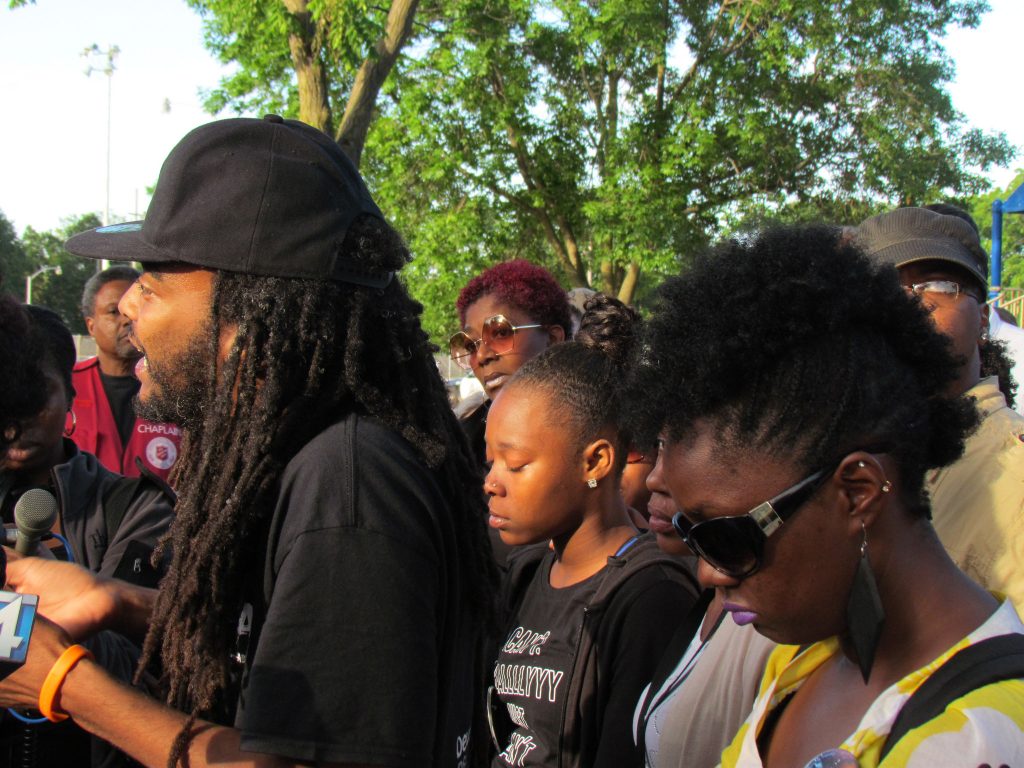 The same night a verdict came down acquitting the Milwaukee police officer who shot Sylville Smith to death, grassroots leaders, activists and individuals close to Smith gathered in Sherman Park in a show of solidarity.

Former Milwaukee Police Department (MPD) police officer Dominique Heaggan-Brown was charged with first-degree reckless homicide. Body cam footage shows Heaggan-Brown shooting Smith once in the arm as he threw a gun over a nearby fence; a second shot hit an unarmed Smith in the chest as he lay on the ground. The shots came 1.69 seconds apart.

Prosecutors argued Smith was defenseless. Defense attorneys argued Heaggan-Brown had to act quickly to defend himself. Heaggan-Brown was dismissed from the MPD in October as the result of an unrelated sexual assault charge.

Qoulisha Thompson, who said she was “like a sister” to Smith, summed up the mood. 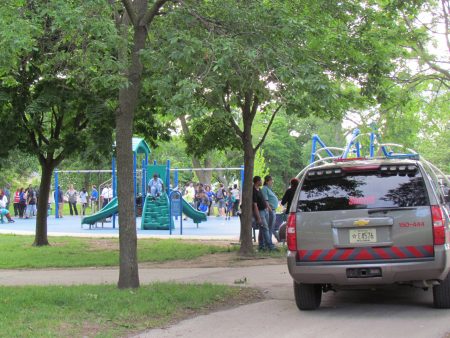 There was a sense of finality in the air. An episode that began when Heaggan-Brown shot and killed Smith last August, setting off unrest that rocked the neighborhood, concluded peacefully. A heavy law enforcement presence of Milwaukee police and county sheriffs patrolled the area.

“We’re trying to do things in a more productive way,” said Vaun Mayes, who works with at-risk youth in Sherman Park. He noted that Smith’s family has staged demonstrations at City Hall since the shooting to put pressure on elected officials, adding the next step is “going after law, going after policy, trying to make actual change, amongst each other in our communities and at large.” After the verdict, the family visited Smith’s grave.

The decision comes on the heels of a verdict in another high-profile case, that of Philando Castile in Minnesota. Castile, a legal gun owner, was shot and killed at point-blank range in front of his family during a traffic stop last July. The officer involved was also acquitted.

Many were not surprised by the verdict in Smith’s case. Smith’s cousin, Taz Ashford, said he prepared himself to hear the news, rather than hoping for something he knew wouldn’t come. In the end, it helped him to deal with the result.

In a statement, District 10 State Rep. David Bowen said, “the second shot was clearly unjustified on video with Mr. Smith on his back with his hands in clear view.”

He added, “The family of Sylville Smith and those angered over his death last year deserve to know their loss will make our community and system better. Nothing has changed since last year and no one has apologized or even committed to preventing these situations.”

“The system … is not working for us because it’s not designed for us,” said activist Frank “Nitty” Sensabaugh. He added, “We just want respect,” urging black people to invest in themselves and their community.

Markasa Tucker, a founder of UBLAC (Uplifting Black Liberation and Community) spoke of the need to “dismantle this system” and the importance of telling each other’s stories.

“We, as people, we have power,” she said. “We move and shift together, so we need the community to come out and show up.”

Imani Ray, 20, said it is important for her to support her community, to go to the places she is needed and connect with people whose lives may have been more challenging than hers. Ray was a member of the youth activism organization Urban Underground before going to college.

“If we can get out here and try to do some things together … maybe we can start to see a change,” Tucker said. “We might not see it tomorrow, we might not even see it in our lifetime, but maybe our kids and our grandkids will.”