Walker Is No Tommy Thompson

But in his less inclusive, more political way, he may be just as successful. 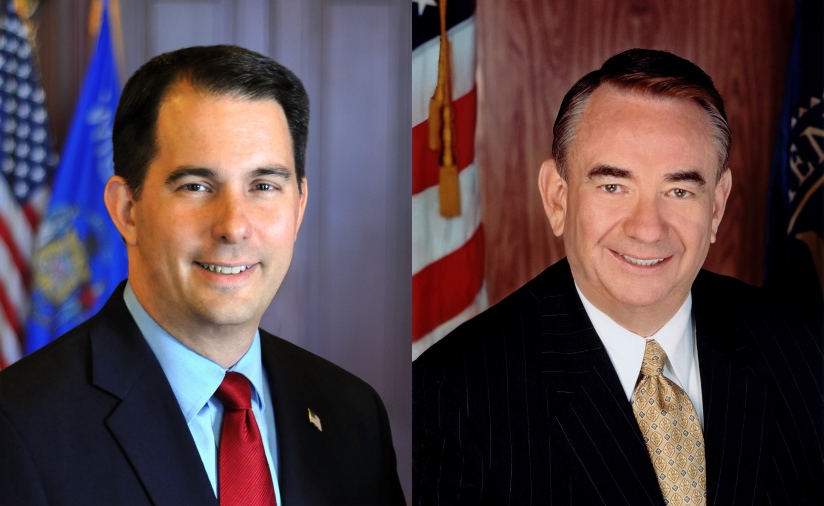 Tommy Thompson surfaced briefly in the news on the 30th anniversary of the beginning of the first of what would be come a record four terms as governor of Wisconsin.

The attention paid to arguably the state’s most successful politician comes at a time when the state’s current governor, Scott Walker, looks to be heading down the same kind of longevity run.

Walker loves to run for office. He runs for something every two years and has hit the stumps a dozen times. So it comes as no surprise that he will be running in 2018 for a third term as governor.

It is too early to speculate about a fourth term. But he is still a relatively young man. He would be 55 in 2022.

That’s not to say the Democrats will concede a third term, but the desolate state of the party offers relatively smooth sailing for him next year in most parts of the state, with the exceptions of the cities of Milwaukee and Madison. Major Democratic contenders have taken a pass.

Pendulums swing quickly in politics, but the Democrats have lost a message that sells. In the Progressive tradition, they offer a never-ending stream of expanding government programs. They offer subsidies to create a deeper and wider safety net.

Republicans offer more upside with a prosperity message, coupled with a more tightly managed safety net. Walker calls his platform a trampoline versus a hammock.

There are many comparisons to be made between Walker and Thompson. But they aligned completely on making Wisconsin one of the most business friendly states. One of those rankings (always suspect for their methodologies) recently put the state in the top ten for business.

Tommy was a cheerleader for business and the state, and so is Walker. Both are upbeat in tone. Thompson’s opening line was often: “Isn’t it a great day in Wisconsin?” Walker’s tag line is” “Wisconsin is Open for Business.”

When I was serving a term as chair of the Wisconsin Taxpayers Alliance, Thompson stormed in to object to an accurate but less-than-sterling grading of the start’s economy and tax climate. He pounded the podium and stormed out. It was great theater.

Democratic Gov. Pat Lucey was pro-business before Thompson. He was famous for his hallmark property tax exemption for manufacturing machinery and equipment. Where are such pro-growth Democrats today?

Smart strategy or not, Walker doubled down on the state’s manufacturing bet with a Lucey-like tax break by eliminating most of the state income tax on manufacturing and agri-business. A case can be made for diversifying beyond those two bedrock sectors of the Wisconsin economy. But it was a bold stroke.

An adversarial posture toward corporations may have played well back in the day when unions were a dominant force, but the confrontational strategies and tactics have given way to more collaborative management models in places of work.

That holds true whether organizations are non-union or still unionized. Global competition doesn’t allow for costly friction within a workforce or rigid work rules. Every employee has to be fully engaged in the success of an enterprise.

Union membership is way down.

The Thompson/Walker positive spin on the numbers has never wavered, even when job growth, wage levels, startup vitality and share of national GDP have long lagged the median for the 50 states.

Both governors can do a 45-minute riff on their upbeat themes without looking at a note. Both are down-to-earth and engaging. Tommy had a genius for working a room. He’s legendary for remembering people and names. Both have the Wisconsin vernacular in their language.

They are, however, far from clones.

Thompson’s approach to governing was inclusive. He created dozens of task forces and commissions to dig into complex policy matters on topics as diverse as export stimulation, juvenile justice and jobs for the next century. (Disclosure: I served on several of them.)

Like good CEOs in business, he encouraged a diversity of thought from experts in a field. He would listen hard to a distillation of the dialogue, slice and dice the conclusions for political impact, strike a direction and then set the wheels in motion to bring about constructive improvements. He was an incisive and decisive executive.

He loved policy and believed good policy made for good politics. He often said he would use his accumulated political chips to get things done.

Thompson’s signature legislation was W2 — Wisconsin Works – that tied work requirements to welfare subsidies. It spread across the nation and to the UK and Western Europe. Welfare rolls dropped.

Walker works differently, albeit in more partisan times. Like his predecessor, Democrat Gov. Jim Doyle, his decisions are shaped by a tight group of staff people in the governor’s office. The cards are kept close to the vest. Task forces and commissions are rarely used. His cabinet is in the background.

In that vein, his signature legislation — Act 10 to shackle public unions – came as a complete surprise to almost everyone, including GOP insiders.

That hardball law fit his formula: hard calls to cut or hold the line on taxes, while undercutting political opposition, all in the same stroke. Walker is more about politics than policy.

While Thompson was able to work across the aisle for some votes, Walker gets next to none from the Democrats. The times are hyper-partisan.

Walker has become a national figure through his hardball politics. Thompson hit the national scene with innovative policies like school choice.

Both made legitimate runs for the Republican presidential nomination. Both would have been better candidates than the two men who won the nominations in 2012 and 2016.

18 thoughts on “Op Ed: Walker Is No Tommy Thompson”