Lakefront Brewery Embraces the Can

Along with some new logos. The canning is done by Stevens Point Brewery. 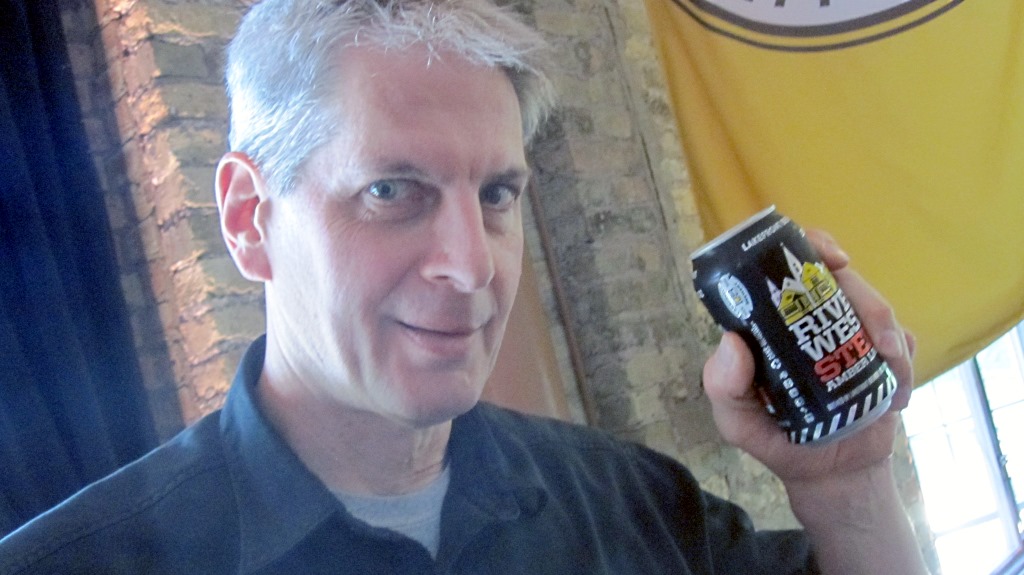 Lakefront Brewery‘s Russ Klisch is known as an innovator, the first to introduce to the marketplace such products as organic, gluten-free and even “indigenous” beers — those composed entirely of Wisconsin ingredients.

But, as Klisch has learned after 30 years in the fickle and highly competitive craft beer industry, sometimes you have to follow a trend, even if you didn’t originate it. Thus, five years after Sierra Nevada, New Belgium and Oskar Blues became the first craft beers to be marketed in cans, Lakefront now offers its flagship Riverwest Stein Beer in 12-packs of 12 oz. cans.

Whence the Demand for Cans?

Where did this demand for canned beer originate? From the brewers who produce it? The wholesalers who distribute it? The retailers who sell the product in stores, taverns and restaurants?

“I’d say the demand came from the consumer,” Klisch responds.

Score one for the little guy! The invisible hand that rules the economy has put down the bottle, picked up the can, and in the process disrupted an industry at many levels. 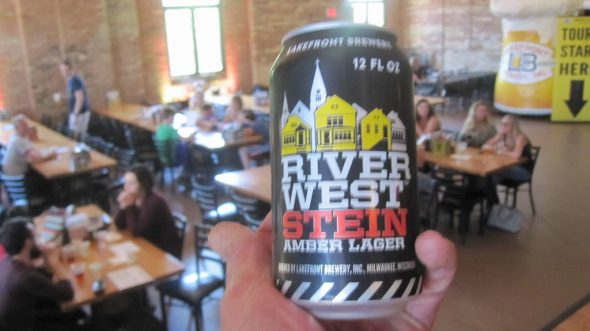 Grocery store craft beer displays have forever been premised largely on the sale of 6-packs and 12-packs of bottled beer. But shelf space is limited and highly competitive.

It would be expected that for some stores to sell chilled cans of Riverwest in 12-packs, the six-pack bottles currently available would have to be bumped from the inventory. Not every retailer will carry redundant packaging of an individual product. In order to (hopefully) increase overall sales, the brewery might have to sacrifice others. Would a customer who regularly buys six-packs of bottled Riverwest Stein double up and start buying 12-packs of cans?– that would be ideal. Or would the consumer instead switch to a bottled six-pack of a non-Lakefront product? That could be fatal for the brewer.

On the plus side for wholesalers, retailers and consumers, 12-oz cans take up considerably less volume than bottles, and are much lighter, less prone to breakage and impervious to light damage, a major factor in beer quality issues.

On the saloon front, there has been an increase in the number of canned craft beers available at some Milwaukee taverns, and this seems likely to continue. A recent visit to Fink’s shows canned beer from New Glarus, Capital, Great Dane, MKE, Hinterland and Good City breweries.

Wholesalers will have to reconfigure their distribution centers and logistics to handle the new product mix.

And brewers lacking canning lines, like Lakefront, will have to come up with creative strategies to meet the consumer demand. The craft beer industry has been flat lately, and it is hoped that cans will put some fizz into the market.

Getting to the Point

Lakefront brewery’s $1 million bottling line is a model of efficiency compared to “Gizmo,” the manual, one-bottle-at-a-time filler that Klisch, an engineer, invented in 1990, shortly after the brewery’s opening on E. Chambers St. in December, 1987. Previously, the beer had been only available in kegs, which limited its distribution to taverns, and made sales to grocery stores unthinkable. Gizmo and its descendants changed all that.

Until last week, all Lakefront’s production, which amounts to some 40,000 barrels a year, was packaged at the brewery, now located at 1872 N. Commerce St.

But the building is functionally at full occupancy. The last of its horizontal tanks has been hauled out of the facility, replaced by a larger, vertical vessel that is but one of many in a stainless steel forest. The brewery long ago ran out of on-site space for finished goods, and now leases warehouse space in Riverwest to store product pending shipment to wholesalers.

Klisch did not have to bother calculating the considerable cost of installing a permanent canning line, since he simply lacked the space. Nor could he make use of a mobile canning system (first introduced to the marketplace in 2011) because he also lacked space to set it up. The only feasible location would have been in the area where the shipping of the cans would have to be done, thereby provoking an existential conundrum.

Klisch’s only option was to contract for canning with another brewery. He chose the Stevens Point Brewery, one of the five oldest operating breweries in the United States. The brewery, with a 150,000 barrel annual capacity, installed a canning line in 2013, and offers contract brewing and/or canning for others.

There is a six-week or so lead time to order cans. This was done through Point, taking advantage of the larger brewer’s wholesale buying power. The empty cans were then delivered to the brewery, awaiting the beer.

On Tuesday evening, May 23rd, a tanker truck pulled up to Lakefront and took on a load of 200 barrels of Riverwest Stein Beer. Once full, the semi pulled out and headed for Stevens Point, 150 miles to the northwest — a two-and-a-half hour journey.

Following behind was “Moby Dick,” so named because of its white color. It is the vehicle Lakefront usually employs to transport kegs and bottles from the brewery to the warehouse in Riverwest. Moby Dick is 11 years old, has over 200,000 miles on the odometer and has undergone replacement surgery for every one of its limbs, joints and organs. Behind the wheel was Russ Klisch, the Founder, CEO and lock-stock-and-barrel owner of Lakefront Brewery; he, too, was headed to Point to watch the process — and then some.

Once the semi arrived at the brewery, the beer was discharged from the trailer and into a “bright tank”, awaiting its turn on the canning line. The canning was complete by early Wednesday. The 200 barrels had translated into 2,500 cases of 12-oz. 12-packs. Klisch loaded as much of the supply as he and Moby Dick could carry, while the remainder was loaded onto another vehicle for shipment to the warehouse.

But Klisch had a different destination — he headed straight for Sussex, where Beer Capitol, his distributor, is located. He wanted to waste no time getting the beer into the wholesaler’s warehouse, and thus into Point’s “Accounts Payable” ledger, and thence into the eager hands of Lakefront’s “Accounts Receivable” clerk. Nearly all of the product from the initial run has been bought by the wholesalers, Klisch says. He envisions doing “another load in a week or so.” By July, he expects to offer Riverwest Stein in 16-oz. cans, yet again following customer demand.

New Logo for Riverwest Stein Beer and Others

The canned product serves as an introduction to a new logo for Riverwest Stein Beer, designed by Lakefront’s brand manager Michael Stodola.

“I thought we should clean it up a little,” Klisch says of the logo. “It looked a little busy.”

The original logo had been somewhat modified over the years, but always featured a red, oval shield with an inset showing a street scene in Riverwest, dominated by the twin steeples of St. Casimir Church of Our Lady of Divine Providence Roman Catholic Parish.

The product’s name was rendered in a German Gothic typeface, such as has been employed by Sprecher Brewery since 1985. The hard-to-read font is not vogue today, when craft beers do not rely upon Teutonic antecedents, attributes and devices to set themselves apart in the marketplace.

“You could go into a store or into a tavern and see the logo, and see the shape,” and therefore know the product was Lakefront Riverwest Stein beer — if you were already familiar with it, Klisch explains. But how to grab new eyes?

“I wanted something that would still represent the neighborhood, but be easier seen,” he says.

The new logo dispenses with the Gothic in favor of square all-cap block type with “RIVER” stacked above “WEST,” in white letters (and employing no hyphen) on a black ground. Below, “STEIN” is in vivid red. Tradition is maintained through the use of a serif font. The Riverwest neighborhood has been rearranged in the logo, with a bungalow, an old duplex and a Polish flat all in yellow now apparently occupying the northbound traffic lane of N. Bremen St. in front of the church, which remains the dominant figure in the illustration, as it is in its neighborhood.

Other logo changes will be put into place over the next few months as the brewery gears up for it 30th anniversary celebration with new introductions, and changes in the names of some old products.

One example of a name change is Lakefront Pils, which will feature a hand wielding a hammer on its bold logo. This beer was, along with Riverwest Stein, the first made by the brewery. The new name will be a bittersweet change for at least one Lakefront Brewery worker, since Lakefront Pils has until now been known as “Klisch Pilsner,” named after the fellow who came up with the recipe and brewed it first for a State Fair Competition: Russell J. Klisch.

6 thoughts on “Plenty of Horne: Lakefront Brewery Embraces the Can”