Road Map to an Aerotropolis

New plan released for municipalities near airport. Will they seize the future?

After years of research, a regional planning recommendation for communities surrounding General Mitchell International Airport, which forecasts six areas of future growth, has been presented.

The development plan is based on an urban planning concept called an aerotropolis, devised by Professor John Kasarda of the University of North Carolina, which posits that an airport can become the center of an integrated economic region, extending as far as sixty miles from the inner clusters of hotels, offices, distribution, and logistics facilities near an airport. That, in turn, requires that surrounding communities work with a shared development vision in order to best leverage the economic activity and capital for the region.

To help make this happen, the public-private Milwaukee Gateway Aerotropolis Corporation (MGAC) was created in 2009, and has a board of directors with elected leaders of municipalities, business leaders and local stakeholders in the region. MGAC partnered with the Southeastern Wisconsin Regional Planning Commission (SEWRPC) to prepare this new Aerotropolis Development Plan, which offers recommendations on how municipalities can cooperate to compete as a region in the global market, using the airport as leverage.

The plans for a Milwaukee Aerotropolis were recently presented at public information meeting held by Ald. Terry Witkowski.

Mike Hahn, executive director of SEWRPC, said the goal of an aerotropolis is “To establish a shared vision and a coordinated effort to capitalize on the airport to enhance the quality of life, stimulate economic investment and promote job growth in the surrounding communities.”

How does it work?

The Aerotropolis concept envisions finding the best and highest use for land as a region, and this means directing development to where, in the region, it can be of best use.

That, in turn, requires cooperation by municipalities — Milwaukee, Cudahy, South Milwaukee, Franklin, etc — on a comprehensive land use plan that is accommodated and encouraged by each municipality’s zoning decisions.

A land use plan is the blueprint, or “road map” as Leif Otteson executive director of MGAC, described it, for a municipality’s desired development.

“The comprehensive plan is not to be taken lightly,” said Sam Leichtling, of the Milwaukee Department of City Development. “It’s the document we look at any time someone comes to the city and asks for a zoning change, any time someone asks for a variance at our Board of Zoning Appeals.”

The Aerotropolis is realized if participating municipalities make what Hahn called “modest modifications” to their comprehensive land use plans matching the land use recommendations for the regional aerotropolis plan.

“We’re all at different points in the same novel,” which is about successfully developing, said Otteson, adding that the plan for aerotropolis communities attempts to answer the question, “How to we all get on the same chapter in somewhat quick succession?” 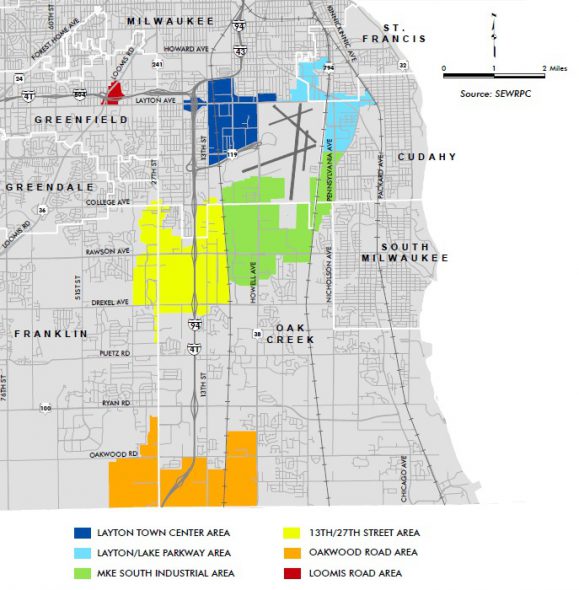 The new development plan is a dense document. But it focuses on six “growth areas” that offer the best opportunity for capitalizing on on the airport, along with recommendations for key transportation initiatives.

These areas were selected for generally being close to the airport, having a lot of underutilized or vacant land and having the ability to accommodate aerotropolis-supporting development and land uses.

Milwaukee’s Piece of the Puzzle

Layton Town Center Area, under the recommendations, would push towards developing underutilized spaces and aging or poorly designed sites. It also would see surface parking lots developed into low-rise parking structures with ground floor retail and office space. Also envisioned: completion of the street grid, which will divide up large parcels and increase access for development.

The Layton/Lake parkway area recommendations call for capitalizing on the area as a gateway to Milwaukee through streetscaping projects like street art, way-finding signage and high-quality landscaping. Also recommended: Fixing incompatible land uses in transition areas between industrial and residential through screening, separation or redevelopment. This area also has transportation goals such as a commuter rail line, improving or expanding local transit, adding bicycle and pedestrian facilities and an extension of WIS 794.

The Milwaukee South Industrial area, which folds around the southern tip of Milwaukee, was highlighted for changes like: building upon existing transportation systems like connecting the area to the Amtrak Hiawatha line, as Urban Milwaukee’s Jeramey Jannene, has discussed in the past. And along with transportation improvements also listed for the Layton/Lake Parkway Area, the plan also calls for enhancing existing freight routes. This area also called for streetscaping and improving pedestrian infrastructure. Key to economic development in this area, though, would be tapping into the economic potential of “manufacturing, logistics and air dependent” land uses generated by its proximity to the airport and I-94. 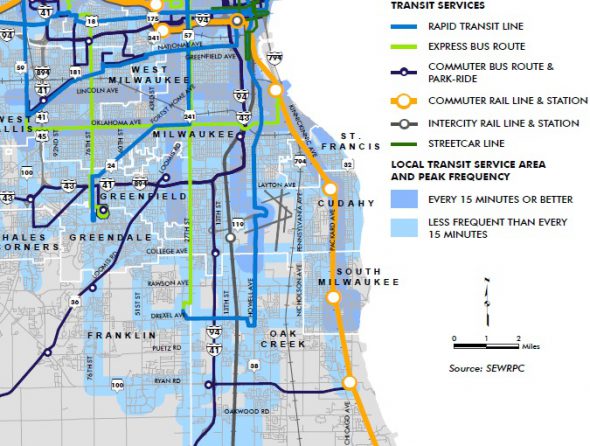 Many of the transportation recommendations in the aerotropolis plan draw directly from SEWRPC’s Vision 2050: Regional Land Use and Transportation plan.

They are centered chiefly around a regional implementation or improvement of multi-modal transportation: bikes, cars, buses, and trains.

Improvements include rapid and commuter transit, via bus or rail, between Milwaukee’s downtown and aerotropolis, increased frequency and routes for busing, improved and new arterial streets and highways, and a major improvement upon existing bicycle and pedestrian infrastructure.

However, all of these projects would be imperiled by the transportation funding gap that already exists, making them hard to get off the ground let alone fulfill the recommendations.

Eric Lynde, chief special projects planner for SEWRPC, said a regional transit authority is something they have looked at in the past.

Urban Milwaukee’s Jannene was among the first to write about the potential upsides of an aerotropolis, and in his 2011 piece he highlighted many of the potential opportunities found in the plan released this year.

Notably, Jannene saw the potential for better connectivity between Downtown and the airport and expanded multi modal transportation that any aerotropolis project would both need and potentially produce.

A 2015 story by Urban Milwaukee editor Bruce Murphy, however, laid out the political obstacles and potential backfire that an aerotropolis could bring.

Many of the vocal-attendees of a recent informational meeting and public listening session for aerotropolis Milwaukee had trouble understanding simply what a land use plan is and how it works. Several spoke up to express fears of local governments taking their home or property through eminent domain, or worse, a multi-governmental authority turning into a regional planning big-brother.

The latter fear echoes the issues Murphy pointed to, that local municipalities do not have a stellar history of cooperation, and paranoia about the usurpation of power seems as common at the governmental level as it was at this recent public meeting. In short, those backing the aerotropolis idea have a major public information task ahead. But at least they now have a detailed planning document that may help dispel those fears and encourage municipalities to cooperate for maximum economic gain.

3 thoughts on “Road Map to an Aerotropolis”