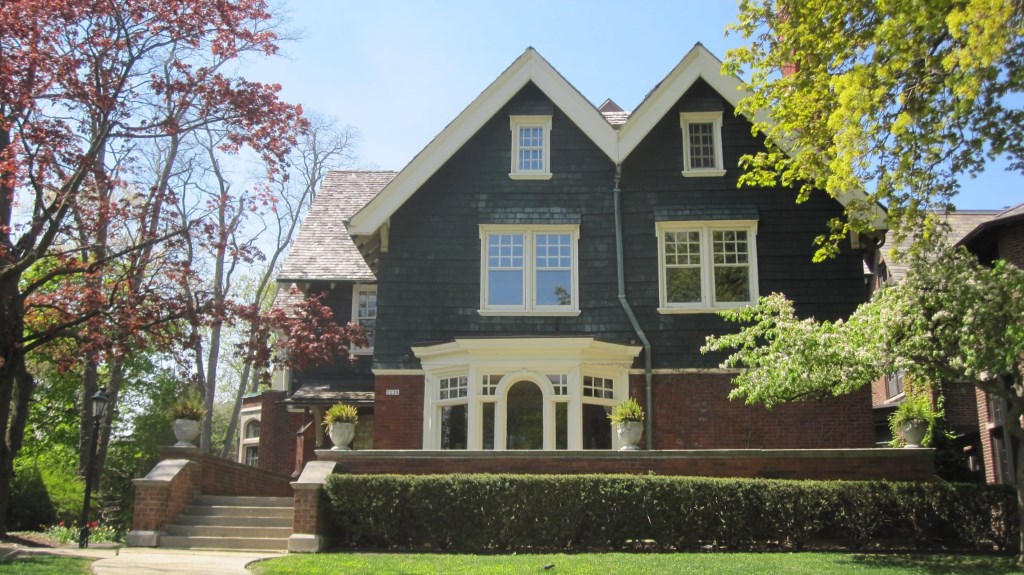 Since its founding in 1998, the Wisconsin Breast Cancer Showhouse has generated $6.15 million for the Medical College of Wisconsin with receipts from its annual home tour. Each year designers from the area donate their time and talents to dress up a selected residence, usually one room apiece.

For an additional $850,000, you get to keep the house, which has a “For Sale” sign from Mahler Sotheby’s International Realty in the front yard. According to the listing:

The home is owned by Andy Nunemaker, a long-time resident of N. Terrace Ave. However, Nunemaker does not live in this residence, for which he received a $700,000 quit claim deed in October 2015. However, he did reside here for ten years before buying his new home two doors and one street to the south. That mansion, which we described as his “dream home”, has a lower-level, Schlitz-themed beer hall. His former home, now being showcased, is also well-endowed in that department: it has 2,582 square feet of basement which could be equipped with quite a bar, and a spa and or even an impromptu movie studio.

Was Built for Industrialist

The showcase home, located at what was then 419 Terrace Ave., was built in 1902 for Clarence Falk (1869-1937), the secretary-treasurer of the Falk Corporation, (now part of Rexnord), a heavy equipment manufacturer known for its giant ring gears. His brother Otto H. Falk was the Chairman of the Board of Allis-Chalmers, another powerhouse manufacturer, now gone. Their father, Franz Falk, arrived in Milwaukee in 1848 and was one of the city’s first German brewers. Visitors to this home will note a hop motif in decorative plaster on the ceiling, along with bottle glass windows and other embellishments.

Clarence Falk was Milwaukee’s first champion of aviation, chairing the local branch of the National Aeronautic Association. His connections and effort earned him the rare honor of hosting Col. Charles A. Lindbergh when the great aviator visited Milwaukee on August 20th, 1927 after his historic Transatlantic flight in May. During what was known as the Guggenheim Tour, Lindbergh touched down in 48 states, visited 92 cities and traveled 1,290 miles on parade, including one from what is now Mitchell International Airport to Juneau Park.

Lindbergh spent the night with the Falks at their other residence, a country home on Green Bay Road in River Hills.

The speed of air travel must have appealed to Falk, an 1893 Harvard graduate who undertook an 18-month world tour by sea and rail after having worked a couple of years in a bank before the invention of the airplane. He visited Hawaii, Japan, China, Singapore, India, Egypt and Turkey on the way to Russia, where he was present for the coronation of Czar Nicholas on May, 26th, 1896. His accounts of these trips were published in the Evening Wisconsin and Milwaukee Journal, and Falk also later published some theater reviews.

In 1919 Falk added some rooms to the rear of his home. In 1949 widow Margaret Wood Sawyer took out additional permits “to set partitions on first floor in present kitchen to form two bed rooms. To install new bath in present pantry. Rooms to conform to min. code req. for size, light ventilation. No additional families.” That must have been some kitchen and pantry to accommodate two bedrooms and a bath as well as their original functions.

Changes over the Years

In 1961 the home was offered for sale at $49,500, and had an annual tax bill of $1,203.15. Although the residence was 59 years old, its parking was rudimentary, with only a two-car slab in the back yard. “Included: antique glass wall plaque in DR and antique European bronze candelabra, rug in LR and foyer.” In 1969 it was owned by Mrs. B. Bullinger.

By 1971 the price was the same, but the taxes had jumped to $1,868.10. The real estate advertisement evoked memories of a bygone era, yet offered a portent of something to come:

Built by Milw industrialist in the days when butlers, 1st and 2nd maids, and chauffeur drivers were in vogue. Beautiful woodwork, fine oak floors. High fenced completely private patio and garden…could be divided into duplex.

James Arnold bought the house, and lived there for a number of years. (Was this the man who did movie reviews for the old Catholic Herald Citizen? Too bad the Journal Sentinel archive is not available to research such questions.) In 1980 Arnold spent $1,850 on a fence in the back yard.

By 1983, the home was accustomed to being put on the market every decade or so.  It was offered at $172,500 with a $4,804 tax bill. The real estate poet was creative, inventing something called “Oriental plaster,” by which is likely meant “ornamental plaster”:
“Spacious, elegant. Oakwood plank floor zoned for duplex. Oriental plaster. Loads of closets. Private yard.”

A cryptic warning was appended: “Furnace for DR not for operating,” and again, the potential to turn the home into a duplex. Will anybody take the bait?

That task fell to new owner Daniel Bruckner, who turned it into a two-family house in 1987.

The assessor was not impressed. During a site visit in 1988, he downgraded the rating of this gem on which Eschweiler had worked so hard: “Converted large single family into 2 unit town house. Grade ‘A-‘ because of conversion minimal quality materials used not in keeping with ‘A’ grade.” Those assessors can be so cruel!

There were other horrors associated with the old mansion: unit II had a very awkward kitchen because there was no place for a table, being only six feet wide and 15 feet long. The only private access to the 2nd floor was via spiral staircase in the rear sunroom, which struck the assessor as looking like a former enclosed porch. To get furniture to unit II, they had to use the unit I staircase and go through a locked door on the top landing which was “very inconvenient.”

This house was not happy being a duplex. And would they ever get around to adding a garage?

At last the reckoning came in 1995 when Robert and Mary Unkel bought the place.

The roof was a mess, and needed repairs, which were approved by the Milwaukee Historic Preservation Office. The roof and copper gutters, siding and window trim, cornice, and brick and base were all to match the existing roof. The garage, now a reality, also matched the previous housing materials, according to the historic guidelines. It was worth the wait: the new garage was detached, with room for 3-1/2 cars. And the duplex was once again a single-family home. Come see for yourself at the Wisconsin Breast Cancer Showhouse 2017. 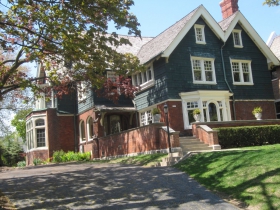 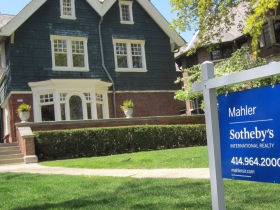 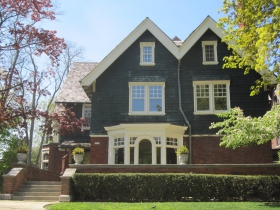 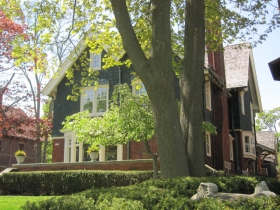 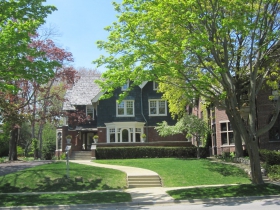 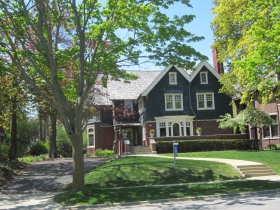 How Milwaukee Is It? The residence is 2.3 miles northeast of Milwaukee City Hall.