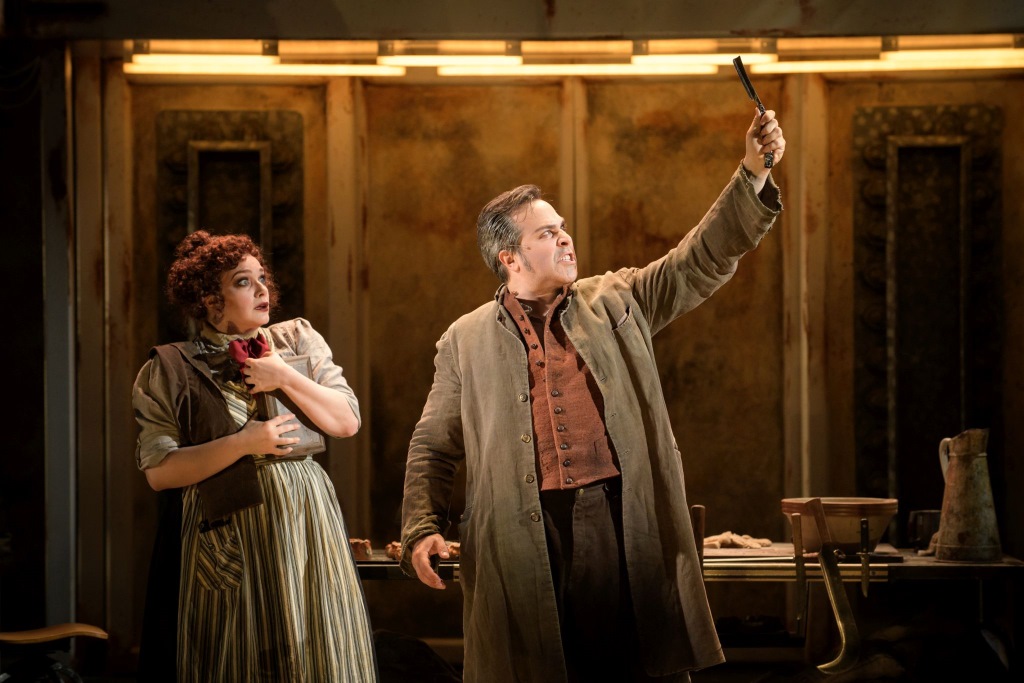 You can find the Johnny Depp movie version from 10 years ago in many outlets, but the Skylight Music Theatre production of this musical is actually far deeper and better. I can’t speak to the umpteenth New York revival of Sweeney Todd: The Demon Barber of Fleet Street — except that this limited London import has now been extended through the year.

But until June 11 you don’t have to go that far to see a powerful fresh production of Stephen Sondheim and Hugh Wheeler’s reworking of a penny dreadful Grand Guignol tale and a play by Christopher Bond. It’s one of Sondheim’s most famous musicals and the one many think veers closest to opera despite its extended dialog.

Sondheim sometimes seems determined to not give the audience a melody to hum on the way out, but the punctuation and repetition built into the score and the visions engendered are haunting enough. The echoes of Victorian sheet music sneak in and few composers take such joy in intricate but soaring dramatic duets and quartets. The music demands flourish and also confrontation with the audience – reminding us throughout to attend this tale.

Sweeney is the revenge-seeking barber returning from false imprisonment to hunt Judge Turpin, who stole his wife and his freedom. On his way to specific vengeance he takes out his rage on random customers, happily slicing throats while the piemaker enamored of him, Mrs. Lovett, knows just what to do with the remains.

The outline of the story always evokes shudders. The unfolding is less horror than insight into the broodings of the demented mind – and a strong suggestion that the mind is partly demented by the injustice of Victorian law, with a little help from the mechanized urban isolation of the Industrial Revolution.

The gushing of blood from cut throats and the music hall ditties built on cannibalism are actually more fun than monstrous, even as we know they are monstrous and watch in fascination as a weird sort of justice is being served up.

Designer Charles Murdock Lucas and director Mathew Ozawa combine for a claustrophobic London with hinged hand-turned scaffolds and wheeled-in sets. These carry us everywhere — from a hospital operating room to a pie shop to a mechanical barber’s seat that drops the victims into a first floor cubbyhole in the second act.

The Cabot Theater stagehands – and sometimes the ensemble – are constantly pushing in new elements of the set, and it is a fine ensemble that must carry much of the story as well as the musical elements. Thus some performers are also returning as part of the landscape, notably Rick Pendzich, Robert A. Goderich and even burly Ben Tajnai who, as the Beadle Bramford, gets to unleash a penetrating tenor.

Aided by Jason Orlenko’s period costumes (designed for quick change) and Jason Fassi’s lighting, plus smoke and whistles, the production elements are almost too inventive to sustain, but they are a pleasure for most of the ride.

Hidden under the stage is an eight-piece orchestra (though they sound like 20) under Ben Makino, who seems perfectly pitched to Sondheim’s ideas and helps make the ensemble sound as big as the orchestra does. 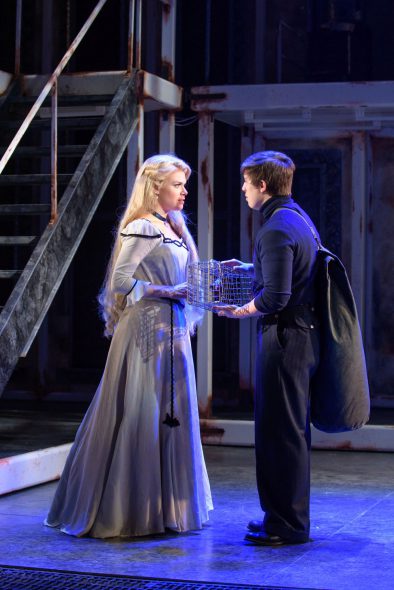 The love story within the tale involves a young sailor and Sweeney’s long-lost daughter Johanna, strongly sung by Lucas Pastrana and Kelly Britt, particularly in the ever-shifting “Kiss Me.” But beyond tender looks, they are not as well humanized as director Ozawa seems to intend. Departing from standard Sweeney outings that act as if handling the music is quite enough to deal with, thank you, Ozawa seeks to give the characters a more believable underpinning within the madness. The acting has ups and downs in a difficult piece, bouncing between sly social observations and intricate musical flourishes involving the whole cast.

Sweeney is given emotional space to make us sympathize with his scowling melancholy. Andrew Varela has a powerful voice and captures the menacing body language. And Sondheim can’t throw a quicksilver phrase, nuance or music hall riff at Christina Hall that she can’t keep up with as Mrs. Lovett. The villain of the piece, Judge Turpin, is arrestingly sung by Randall Dodge, who actually draws us in (hating ourselves) to his lechery in “Mea Culpa.”

These are the three roles in which the singing seems of a piece with the drama. In other roles, the good singing is here and the acting is more automatic than Sondheim’s emotional phrasing encourages.

An exception as his character changes dimension is Ryan Stajmiger as Tobias Ragg, the boy driven madder than Sweeney ever was. And in the production I saw, understudy Susan Spencer was effective vocally as the beggar woman.

Sweeney Todd has been much exposed in various media since I saw its premiere production in 1979. So it would be hard to displace my memories of Angela Lansbury, Len Cariou and Victor Garber. Yet the Skylight offered fresh insights and quality elements, with a scenic inventiveness and a psychological match that the piece deserves and seldom gets. 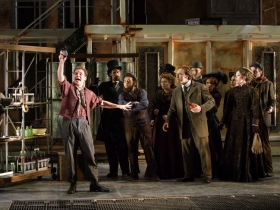 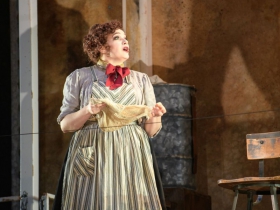 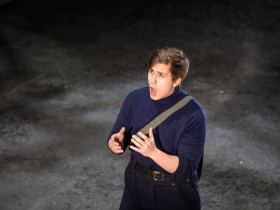 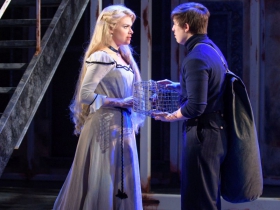 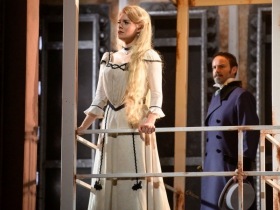 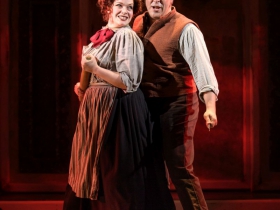