Menomonee Valley. Photo from the City of Milwaukee.

Central location, surrounded by transit, but served by only one bus line.

The Menomonee Valley has a “Last Mile” transit problem that rivals those in outlying areas, despite being surrounded by transit lines according to “The Last Mile: Connecting workers to places of employment,” a new study by the Public Policy Forum. Rob Henken, the president of the organization, made a presentation Tuesday on this subject at the regular meeting of the Rotary Club of Milwaukee held at the War Memorial Center.

Most “Last Mile” projects seek to connect city workers with suburban jobs, but apparently the Valley workers need better transit as well. There is only one line that goes through the Valley, and it dead ends east of Miller Park, a major employment center. Suburbs, meanwhile, continue to be a problem because they do not have the proximity or the density to offer full service transit, especially since most employers do not have great numbers of workers.

According to the report, “transit systems cannot be expected to solve all of metro Milwaukee’s distinct last mile challenges on their own. Previous land use decisions have made it difficult or impossible for transit systems to effectively serve many employer locations – particularly given budget realities.”

There is no “silver bullet solution,” Henken said. Researcher Joe Peterangelo studied systems in other regions, and found several options for getting workers to their jobs, when the jobs are a mile or more from the end of bus lines.

Flexible Transit and Ride Hail were considered most suitable for the area.

Flexible Transit consists of 14 passenger vans in low-density areas of about four to 10 square miles. These vans are permitted to deviate from the route within their regions as well as being demand-responsive. They require about 3-10 riders per hour to be sustainable. The downside is that employers and employees must be prepared for some fluctuation in arrival and departure times.

“This option could be considered in suburban areas of metro Milwaukee that are on the edges of the existing transit system, where demand often is too low to sustain regular, fixed-route bus service,” according to the report.

The study analyzed a system in Englewood, Colorado, a Denver suburb. However, Denver has a regional transportation system with dedicated funding, and Englewood has a light rail station.

Ride Hail only operates on demand. Pinellas County, Florida is divided into transit zones. When the rider reaches the end of the bus line on the way to work, the last mile would be covered by Uber drivers, with the ride being subsidized by the county.

Potential for the Valley

Since 1999, the redevelopment of the Menomonee Valley has led to the construction of 1 million square feet of office space employing 5,000 workers at over 40 companies. 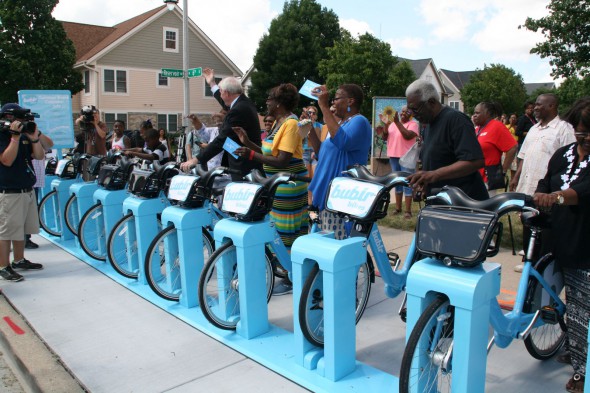 But the Valley has geographic problems, including being splintered by a freeway, two canals and two railroad lines. Furthermore, the Valley is some 70 feet below the surrounding, densely populated area. Three north-south bus lines soar high above the valley on viaducts, while only the #17 line traverses the valley proper.

This might be a good location for Bublr stations, and local business owners have been calling for these amenities, the audience was told. Bublr could add stations on W. Wisconsin and W. National avenue bus stops, and Valley businesses could add docks at their doors. Furthermore, the closest stops to the Valley would also be stops for the Flexible Transit vehicles. A pilot program in partnership with Valley employers was recommended.

Public, private and public-private financing options would be considered. For example, the elimination of the Route 17 could fund its replacement by the flexible transit service. Some employers, particularly larger ones, might consider funding their own vehicles. Also, employers in a given region could partner with Business Improvement Districts to provide the needed revenue. The report cites a study by the Milwaukee County Comptroller that projects an increase in costs and a decrease in revenues by 2020 that will require increased subsidies from the county. The political reality is that private funds will almost certainly be required.

Until recently, the Ozaukee County shared-ride taxi service would not accept rides to the nearest Milwaukee County bus stops, many located just a mile or so south of the county Line, but it now does so. Since there are no regular Milwaukee County buses operating in Ozaukee County, even on busy N. Port Washington Road in Mequon, a two-minute taxi ride away, this new service is a great aid, and fills a void in transit options.

The study faults Milwaukee County for failing to develop a robust official MCTS mobile application as found in other communities it studied.

“Other transit systems have developed mobile applications that allow users to purchase bus passes and add value to their fare cards, get point-to-point transit directions, and track bus arrivals in real-time using their mobile devices. In some cases, ride-hailing and/or bike share services are integrated into those mobile apps. An official MCTS mobile app could similarly enhance convenience and pave the way for on-demand transportation services. Through regional collaboration, Waukesha County’s transit and Ozaukee County’s share-ride taxi services also could be integrated into the app,” the study noted.