For the past 15 years, artist Nicolas Lampert has focused on connecting local artists to social justice issues in Milwaukee.

Lampert, a University of Wisconsin-Milwaukee professor, works with organizations such as Voces de la Frontera and ReciproCity on designs and artwork to support their causes. Lampert has designed fliers and other pieces for the May Day marches organized by Voces for the past five years. The marches call attention to immigrants’ rights in the U.S. This year, Lampert organized other artists to design artwork for the march.

“I made sure that the voices of the artists are coming through,” he said. 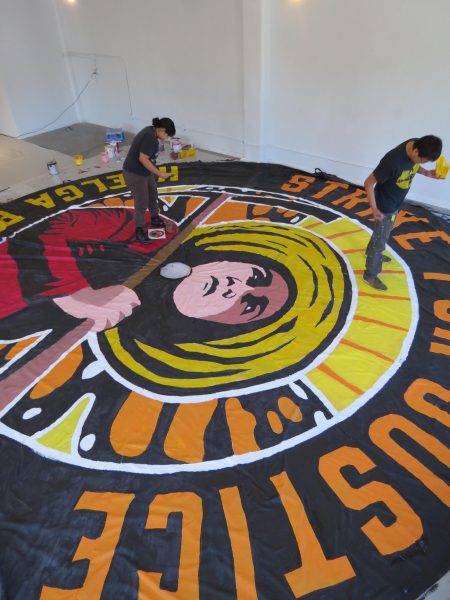 After the inauguration of President Donald Trump, Lampert assisted Voces in forming an artist collaborative to create pieces for marches and demonstrations.

“It doesn’t have a name yet, but we created this collaborative for the ability to have multiple artists work on projects,” he said.

Lampert, 49, helped organize more than 40 local artists for the collaborative, including Raoul Deal, Claudio Martinez and Jeanette Arellano. Lampert hosted an “art build” during Easter weekend to complete three 24-foot-wide parachute banners that will be used during the march on May 1.

“When we carry those banners our audience is the people and the news helicopters,” said Lampert. “That’s why we made them so big.”

Before coming to Milwaukee in 2001, Lampert lived in Oakland, California. Now, he is a senior lecturer at the Peck School of the Arts at UWM, and collaborates with artists on projects that benefit the community.

“I’ve been an artist my whole life,” he said. “My parents always encouraged me to be one and it was just my path.”

Martinez, a UWM graduate and Lampert’s former student, worked with him on a project for the Milwaukee Teachers’ Education Association in early February. Martinez also created one of the images featured on the fliers promoting the May Day march, and on one of the banners.

“Nicolas was my professor 10 years ago at UWM and when he invited me to be a part of this build, I was thrilled,” said Martinez, a native of Oaxaca City, Mexico, who said he wasn’t politically involved until after Donald Trump was elected president.

Over the next couple of months, Lampert will be working on several projects across the country for events such as the People’s Climate March in late April in Washington, D.C. and the Midwest Renewable Energy Fair in June in Custer, Wisconsin.

“I am flying back from the Climate March the next day just so I won’t miss the May Day march” Lampert said. “I wouldn’t miss it for the world.”