Save the Gettelman Brewery Buildings

The Gettelman Brewery buildings are setback from the street and are visible to the left of the drive.

A major site of Milwaukee’s brewing history could soon be reduced to rubble. In a city that was and still is known as the “Brewing Capitol of the World”, two adjoining former Adam Gettelman Brewery structures, dating to the earliest beginning of that brewery in 1856, stand vacant and almost forgotten on the western fringe of the Miller Brewery complex in Milwaukee. It has recently been revealed, thanks to the enterprising reporting of the Journal Sentinel newspaper, that those structures and their connecting beer cellars below are slated for demolition. Miller Brewing Company, known today as MillerCoors, has been using the expansive vacant property around those two historic brewery structures as a staging area and parking lot for semi-trailers, which now accommodates more than 150 semi-trailers. Miller is seeking a permit to demolish those two historic Cream City brick Gettelman Brewery structures along with their underground beer cellars. Miller intends to use that relatively small footprint on which those builings stand to accommodate additional truck parking. It should be noted that Miller has several large parking lots and other vacant land on their grounds in close proximity to the Gettelman property. 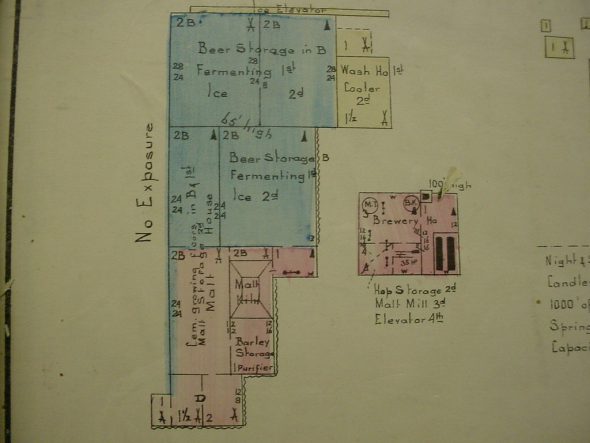 Sanborn Map of the Gettelman Brewery.

A nomination for Temporary Historic Designation of the Gettelman structures has been filed with the City of Milwaukee. It requires that the Milwaukee Historic Preservation Commission evaluate the historic significance of those Gettelman buildings no later than April 23rd. If the Commission approves this petition, a subsequent permanent designation is possible. With the pending inevitable demolition of the last standing former Falk Brewery building in Milwaukee and their beer cellars, the Gettelman buildings will be the only remaining location in the City of Milwaukee with underground arched-brick brewery lagering cellars. A brewing concept and feature brought here by German settlers, known as “lagering cellars”, provided a cool temperature in which to store and ferment beer, prior to the introduction of mechanical refrigeration in 1880. In contrast to the Miller Brewery, which had their beer cellars, know today as the “Miller Caves”, excavated into a hillside, the Gettelman cellars were excavated below ground and located beneath those two surviving Gettelman structures. Underground beer cellars were common in most all of Milwaukee’s earliest breweries more than a century ago.

Miller Brewing Company, which also traces its roots in Milwaukee to the 1850’s, purchased the Gettelman Brewery and property in 1961. The cellars below were home to the Gettelman Rathskeller after prohibition and one of the structures, later used as a reception area, was once home to the Gettelman family After the purchase, Miller shut down all brewing operations at the Gettelman facility several years later and over the following years, demolished several Gettelman structures. These two remaining now vacant Gettelman structures, which date back to 1856, were at one time used by Miller as office space and later as storage. These two historic Gettelman Brewery structures are located directly across the street from the MillerCoors Visitor Center, which attracts thousands of tourists year round, many of whom are not only interested in Miller, but are interested in all Milwaukee breweries, both past and present.

Miller Brewing Company has promoted and prided itself as an icon of the City of Milwaukee. And its corporate parent, MillerCoors, has been an excellent corporate citizen of Milwaukee and has done much to support and promote the city. As a company that often reflects on its past in its promotion, it may be in their best interest to set aside the need to park a few more semi-trailers and instead preserve a vital part of Milwaukee’s brewing heritage. The former Gettelman buildings with their cellars below, have the potential to emerge as a tourist facility or other historic brewery-related attraction that could promote and enhance both Miller and Milwaukee. They should be preserved. Miller/Coors now has a wonderful opportunity to once again reinforce it self as a good corporate citizen of Milwaukee and cancel their plans to demolish the former Gettelman structures, the cellars below, and the last trace of any underground lagering cellars in the City of Milwaukee.

Leonard P. Jurgensen, is a Milwaukee brewery historian and the author of “Milwaukee Beer Barons, Brewers, Bottlers and other buried at Forest Home Cemetery.”

14 thoughts on “Op Ed: Save the Gettelman Brewery Buildings”