Every School A Sanctuary

By Andrea Waxman, Milwaukee Neighborhood News Service - Apr 7th, 2017 11:57 am
Get a daily rundown of the top stories on Urban Milwaukee 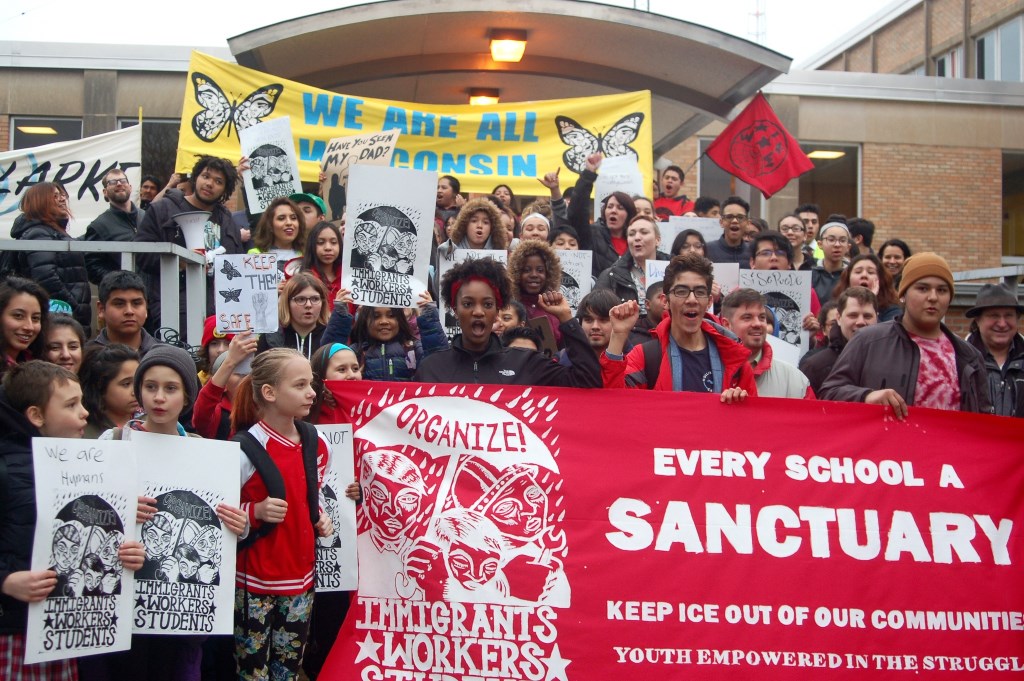 The emotion in the packed room was palpable as more that 40 speakers stood before the Milwaukee Board of School Directors to speak in favor of a resolution to designate the district a safe haven for undocumented immigrant students and their families.

Students, parents, alumni, teachers, staff and city residents raised concerns about the security and psychological well–being of MPS students, and talked of American ideals of inclusivity, the country’s history of immigration, law, leadership and, most of all, their own family stories of struggle and sacrifice. Just one speaker opposed the resolution.

Emily Z told of how hard her parents work to provide for her and her younger brother. In tears, she said they fear being stopped by Immigration and Customs Enforcement (ICE).

“Our parents want us to be the (people) that they wish they could be. They want us to have a chance here.”

Many of the students who testified were members of Youth Empowered in the Struggle (YES!), the youth division of immigrants rights organization Voces De La Frontera. YES! was a driving force behind the resolution, said Cendi Trujillo, Voces De La Frontera’s youth organizer. The 100–plus members of the Milwaukee branch had been working on the resolution since shortly after the November election, Tujillo explained.

“They started thinking about what they could do to protect themselves” in light of the new U.S. president’s tough stand on undocumented immigrants. The resolution provides “a way of resistance and sends out a very strong message that we are here to stay,” she added.

School board member Tatiana Joseph, herself a formerly undocumented child, said she worked with YES! and several other organizations to draft the resolution that calls for Milwaukee Public Schools to protect immigrant students and refugees. Joseph and board Vice Chairman Larry Miller co-sponsored the resolution.

In addition to discussing the resolution at their schools, YES! members sought input from an advisory group of stakeholders including teachers, administrators and parents. In early March, they invited the full school board to the Voces De La Frontera offices, where they explained the resolution, shared their personal stories and asked for a commitment of support, Trujillo said.

More than 100 people staged a pre-vote march and rally at the MPS central administration building, 5225 W. Vliet St. Student speakers told the crowd about the difficulties they have faced as immigrants and refugees and called for support of all students.

Farok Rashid, 16, a Rohingya refugee from Burma, arrived in the U.S. three years ago. Explaining that his parents died of AIDS before he left a refugee camp in Malaysia, Rashid detailed some of his struggles there including severe bullying.

After the vote, the South Division High School student said that though he participates in many extracurricular activities that help others, this is the first time he has joined a protest or taken political action. “I am very happy and proud of myself and everyone else,” Rashid said. 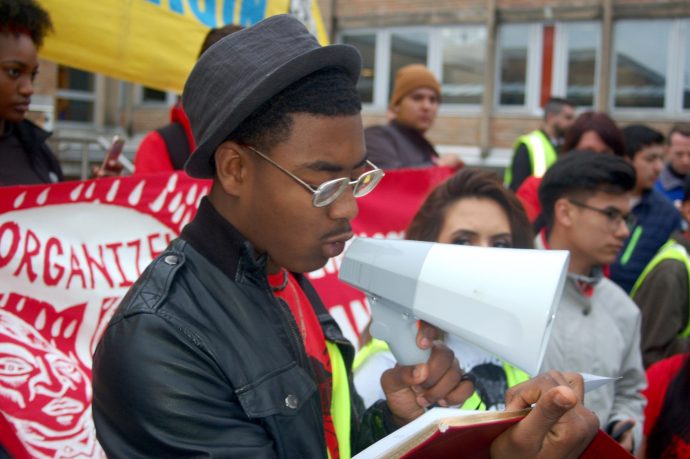 Romeo Johnnies, a junior at Alliance High School, read an original poem. Though he is not an immigrant himself, Johnnies belongs to YES! and has marched in support of Black Lives Matter and against the takeover of MPS last year, he said.

“I believe everybody, no matter who you are or what race you are, or where you’re from or what your background is, should have equal rights … I believe if we are called the land of the free then we should all be free,” Johnnies said.

After the unanimous board vote to pass the resolution, the elated students gathered in the building lobby to share their happiness and relief and document the moment with group photos.

“I feel happy because they’re understanding where we are coming from,” said YES! member Brandon Fragosa, a junior at Ronald Reagan High School, adding that he hopes that this message of inclusion by MPS will spread to other parts of American society.

Trujillo noted that at several points the students questioned whether the work and emotional effort of the campaign was worth it. “Having to put yourself in a position where you are vulnerable is a huge step. For a lot of them, it was the first time sharing their stories or their parents’ stories,” she said, adding that the experience helped them feel empowered. Now they are asking themselves, ‘What’s next?  What else are we capable of doing?’” Trujillo said.

The resolution, which Trujillo and Voces De La Frontera Executive Director Christine Neumann-Ortiz say will not cost the district financially, includes a provision that MPS schools will refuse to cooperate with ICE (U.S. Immigration and Customs Enforcement) by not allowing them on school premises or sharing students’ confidential information. It also calls for creating a rapid response plan in case of a raid involving parents or guardians, and connecting students and their families to legal, social and medical services as needed.

The district’s next steps include establishing an immigration resource center in every school and developing procedures defining the appropriate steps to take if law enforcement comes to a school, according to an MPS release.

One thought on “Every School A Sanctuary”