Mitchell Field now has directs flights to and from Guadalajara. And no wall will stop it. 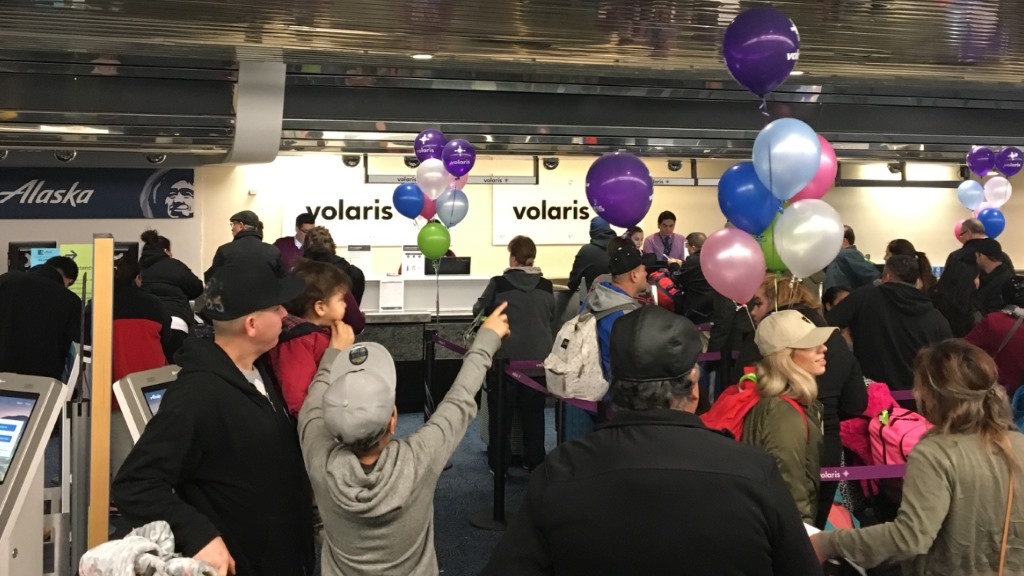 Waiting to check in to Volaris Flight 657. Photo by Frank Martinez.

Before boarding Volaris Flight 657, the inaugural flight from Milwaukee to Guadalajara, I stepped into the the concourse restroom and saw a barrel-chested, full-voiced mariachi singer changing into street clothes.

Yes, they had performed at the ribbon-cutting event that wrapped up ten minutes earlier. Airport and Volaris officials spoke. Julián Adem, the Mexican Consul in Milwaukee, spoke. Some lower level elected officials spoke. (One mentioned how excited she was for Milwaukee’s first ever flight to Guatemala.) And as they all cut the ribbon the members of Mariachi San Francisco spread their arms and sang a handful of classic Mexican songs, guitars and horns included. The perfect live soundtrack as passengers lined up with their boarding passes. 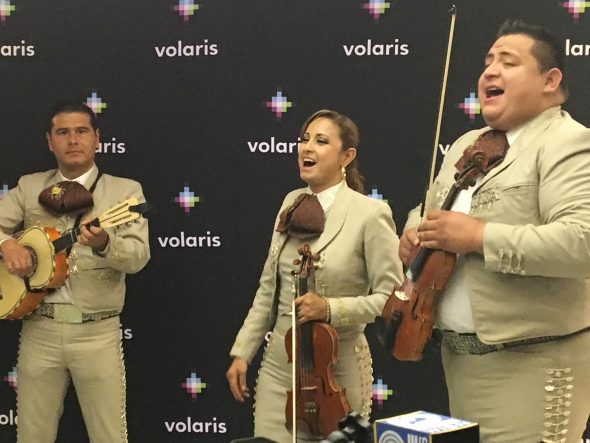 “You guys were great!” I told them. “Where are you from?” I asked, expecting to hear Milwaukee or maybe Chicago.

They had flown in a few hours earlier on the first-ever Guadalajara flight to Milwaukee for the festivities. They played music for the arrival event and the departure event. They changed their clothes and flew back to Guadalajara.

How long did you spend in Milwaukee?

And as I boarded, two guys from the band tossed suggestions my way for the best place to go for birria in Guadalajara. (They recommended El Chololo.)

Even with US-Mexican tensions elevated these days, Milwaukee is now more directly connected to Mexico than ever. And my one-way to Guadalajara cost me just $136. 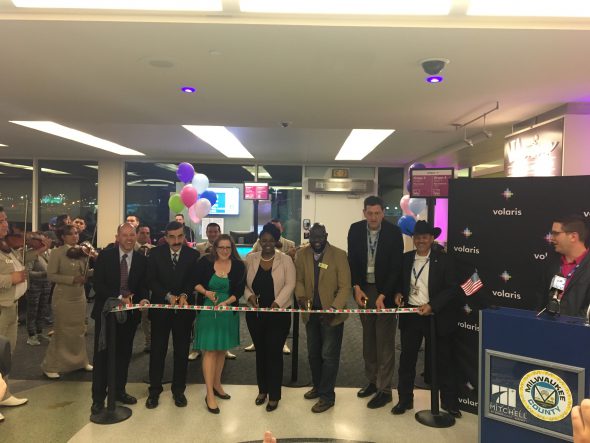 Starting with the first flight on Friday, March 2nd, Volaris flies round trip, between Milwaukee and Guadalajara, twice a week. The Airbus A320 arrives from Guadalajara on Tuesday evening and turns around for the Wednesday overnight flight back to Mexico. Volaris repeats the round trip on Thursday-Friday.

Volaris is a growing airline, now the second largest in Mexico. Similar to Southwest or Frontier, they aim to offer fares affordable for everyone.

This regularly scheduled international flight from Mitchell Field is a big additional to international travel from Milwaukee that previously consisted of service to Toronto and mostly winter months vacation routes to to tropical hot spots. The route between Guadalajara and Milwaukee emerged because of a growing community here in town with ties to Guadalajara, Mexico’s second biggest city.

To Adem, this route fits a natural need that has developed over time. “The state with the biggest number of immigrants in Milwaukee is Jalisco,” says the Mexican Consul. “There are also lots of immigrants from Michoacán and Guanajuato, neighboring states of Jalisco. So Guadalajara is a natural destination for all these people travel to Mexico.”

Who will be flying this route? Mostly people visiting family and friends, either back in Mexico or here in Wisconsin.

Jasmin and Delia Estrada are sisters, both in their early 20s, both St. Joan Antida High School grads. Delia graduated from Alverno and works as an accountant; Jasmin followed her big sister to Alverno and is studying math. They were on their way to visit their grandmother in Arandas, a small city about 80 miles from east of Guadalajara, for a two week trip.

Their grandmother is getting older so they try to visit once once or twice a year, and before they always flew out of Chicago. When I asked the sisters how they ended up on the first flight for this route, Jasmin said that news of this new flight was passed along by a lot of her friends on Facebook in the Latin community in town.

Héctor Espinosa, Content Manager for Volaris, echoed that: The first flight “is almost full but we haven’t done any marketing at all. This has been mouth-to-mouth marketing and this is almost a full flight.” Before takeoff, I looked around and estimated that about 80 percent of the plane’s 179 seats were filled. The flight attendants thanked us for being part of history and passed out t-shirts that read, “Lake Michigan to Lago Chapala.”

I asked Mr. Espinosa if Volaris plans to expand service in Milwaukee, either with more flights on this route or new routes from Milwaukee to other Mexican cities. “We are considering it. We aren’t so sure right now so I don’t want to talk about new possibilities. We want to see how it goes with this route. We think it’s going to be a very successful one.” 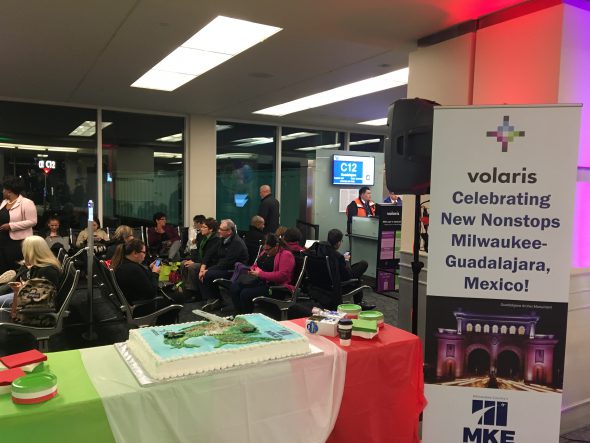 The Mexican Consulate in Milwaukee opened in August and Adem declared at the event that “this is a two-way street,” a Mexican company being successful in the US instead of just the other way around. It is also a two-way street in terms of people, with people who live in Milwaukee visiting those back in Mexico and people in Mexico visiting family and friends who now live in Wisconsin.

Stewart Maldonado is an example of the back and forth between the two countries and the two communities. He is a happy middle-aged man, and he looked happy as he settled into his seat for the overnight flight. The price was good and he didn’t need to ask anyone to drive him down to O’Hare or Midway. About a year ago he moved to Racine, because his sister was living there, and he likes it here even though he said the winter was tough. Mr. Maldonado was heading to Santa Fe, a town near Guadalajara, where he has tons of family.

He went for just six days, but his parents will be heading back for a family visit themselves soon. They’ll be flying from Chicago though, because they booked their flights before the Volaris route from Milwaukee was available.

International Travel, from MKE to GDL

The inaugural flight left on time and arrived in Guadalajara early. We were in the air for just over four hours. 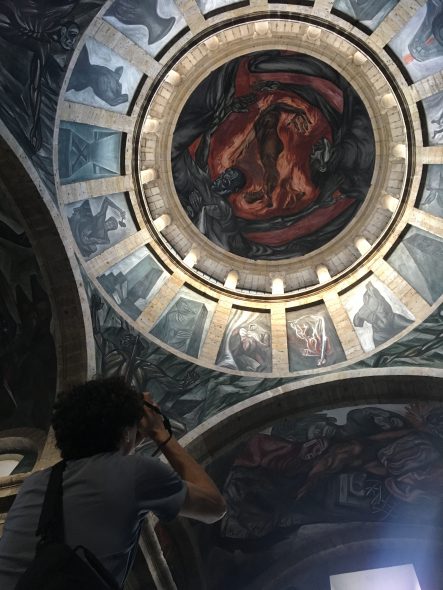 A regular route, international service not designed just for people traveling with swimsuits and sun block, is a major addition to what Mitchell Field offers. And while Guadalajara may not spring to mind for those looking to flee to Mexico for a week like Cabo or Cancun might, there is plenty to explore in this metropolis of almost five million people. Native son José Clemente Orozco’s masterwork — murals dominating the roof and walls of the Hospicio Cabañas — is the Western hemisphere’s answer to the Sistine Chapel. And there are countless easy day trip tours to the nearby town of Tequila… and we all know what that town is famous for.

Build a wall or don’t. Airplanes go over even the tallest walls and now Milwaukee is directly connected to Guadalajara, Mexico and the Mexican state of Jalisco. This is not a sunbird flight that hops to Cancun or Puerto Vallarta during our city’s coldest months. This new Volaris route connects two industrial cities and regions with a weekly flight that is a big step forward in Mitchell International’s international service.

As Jalisco’s tourism slogan says, Jalisco is Mexico. And now, year round, Milwaukee offers direct travel to the heart of our neighbor to the south. Through our people and now through air travel, our two nations are more interconnected each day.

For my seat mate, Mr. Maldonado, this was a solo trip. But he gestured around the cabin right before takeoff with his hand. “I see lots of friends on this flight.”

5 thoughts on “Milwaukee Connects to Mexico”