Yes, We Have an International Airport

Early on the morning of April 2nd, Holy Thursday, I got on the Green Line bus from my neighborhood stop in Milwaukee heading toward the airport while it was still dark. Checking in for my flight took seconds. I was among many happy passengers – a family from Brookfield, a large group wearing identical neon green t-shirts – and under the guidance of a cheery captain who encouraged us. ”I hope you brought your swimming suits!” Three hours and 20 minutes later we landed in Mexico.

There is something more miraculous about the miracle of flight when rather than landing at LaGuardia or Philadelphia, you land directly in Cancun, in a different country, overlooking the Caribbean.

That part was easy, too. Cancun is a massive operation, where customs usually takes just minutes and everybody is friendly. Around me ambitious tourists bought cold beer and margaritas while they waited for dozens of vans to shuttle them to their resorts along the crescent of bright sun and white sand beaches.

Buses radiate to towns all over the flat, lightly wooded, Yucatan peninsula, and my second class bus passed through towns like Chemax and Dzitas and on the way toward Izamal, the Yellow City. In Milwaukee I paid my bus fare with an electronic M•CARD. In Mexico during stops vendors come aboard the bus to sell water, popcorn, and homemade peanut palanqueta candies. One day it was 60 degrees warmer than it was in Milwaukee. 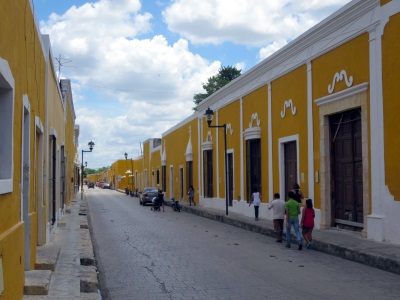 Izamal is striking because every building in the town center is painted the same goldenrod yellow, with white trim. I walked one block from the bus station to the main plaza, which connects to steps that lead up to the San Antonio convent where Holy Thursday evening mass had just started, with standing room only. That morning I was riding the bus in Milwaukee, and now I was in another world, another culture, where the Passion of Jesus became a colorful celebration. The priest ceremonially washed the feet of parishioners, and after mass led a silent procession around the enormous dark courtyard.

Next to the convent, teenagers dressed as Roman soldiers chased Jesus around the Plaza Zamná. They used their whips. They laughed as they ran around the plaza, and the cao birds in the trees screamed in response to the commotion. Good Friday around noon back in the convent’s courtyard was more serious. The two thieves were already mounted on their crosses. The crowd, cameras ready, watched as Jesus was mock-nailed to the cross and lifted up.

Just a few blocks from the convent, through a bending street of yellow-walled buildings, was the large, partially restored Kinich Kak Mo pyramid. Some of its stones were taken to build the San Antonio church, but when I climbed to the top of Kinich Kak Mo, I stood high above the yellow convent. 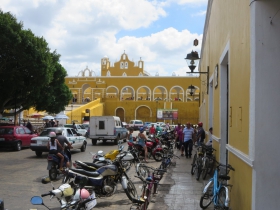 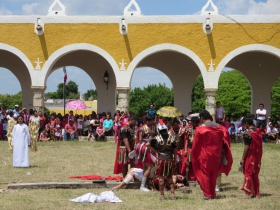 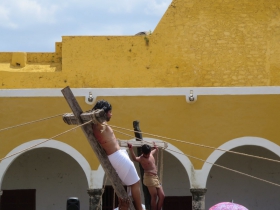 Few people seem to know it, but General Mitchell International Airport is an international airport. These customers are mostly snowbirds, with almost three-quarters of direct international Milwaukee passengers traveling during January, February, March, and April.

Last year about six and a half million passengers flew through Milwaukee’s airport. Of these, about 110,000, or 1.7 percent, were on direct international flights, although the number of such fliers has inched up in the past few years while overall passenger traffic has plummeted from a high of almost 10 million in 2010. (After incredible passenger growth, AirTran and Southwest consolidated, Republic cutback substantially, and an intense period of competition in our market ended.)

International service is mostly limited to regular flights to Toronto and seasonal flights to Mexico. Starting around Christmas and through spring break, AeroMexico, Delta, Frontier, and Southwest offer direct flights to family-friendly Caribbean beach spots like Mexico’s Cancun and Cozumel, the Dominican Republic’s Punta Cana, and Montego Bay in Jamaica. Flights also go to Puerto Vallarta and Ixtapa/Zihuatanejo on Mexico’s Pacific coast. Southwest and Delta currently offer flights to Cancun year round but only on Saturdays.

But most people who fly internationally from Milwaukee do not fly direct. The 2012 Brookings study “Global Gateways: International Aviation in Metropolitan America” reported that in 2011, of all passengers flying abroad from Milwaukee, 85 percent made a US connection before leaving the country.

This is not surprising, given that an incredible 96.6 percent of all international travelers from the U.S. either originate in or travel through just 17 metropolitan gateways. These are major international hubs like New York, Los Angeles, Chicago, Atlanta, and Miami.

One advantage of living in Milwaukee is that we are only 80 miles from one of the world’s great airports, which means that Paris, Beijing, Istanbul, and Tokyo are all a single flight away. But that means a ride to O’Hare, and dealing with O’Hare, which adds considerable time to your trip before you ever get on a plane.

You can also fly out of Milwaukee and connect in a city, such as Atlanta or Dallas, with more international flights. In fact, if we want more direct international flights from Milwaukee, this is exactly what officials at Mitchell International recommend. According to Ryan McAdams, spokesman for the airport: “The very best way for travelers in Milwaukee who want to see additional service added here, is to fly from here. Starting your trip from Milwaukee helps create demand for more air service here at MKE. When choosing where to grow, airlines tend to choose cities that have the most demand.”

Milwaukee is not an international gateway. With no major airlines headquartered here and a metropolitan area population usually ranked about 35th in the country or slightly lower, that is unlikely to change. But we have frequent service to major international gateway cities like Atlanta and Chicago, and it helps to have O’Hare just an hour and a half drive away. A city like Kansas City, very similar to Milwaukee but isolated geographically, does not have that advantage.

But McAdams cautions people who think flying out of O’Hare is easier because it avoids a second connection, that “connecting by car” in Chicago often ends up costing more as well as causing more headaches. He adds that only 67 percent of flights departed from O’Hare on time in 2014, worst in the nation.

So take advantage of seasonal direct international flights from Milwaukee when you can. Not only do they connect us to great beaches but to parts of the globe that are worlds away from our everyday lives. And consider McAdams’ idea of flying from Milwaukee and connecting to an intermediary city rather than using O’Hare for international travel

Our flight options are an asset for Milwaukee. The Brookings report notes that “while a metro area may have a wealth of human and economic capital, they cannot fully exploit those resources without strategic global linkages.” Our seasonal international flights are successful, and service may continue to expand moderately. Though San Juan, Puerto Rico is actually part of the U.S., it is an overseas destination that offers both beaches and family links for our significant Puerto Rican population, and might be a successful fit for the next direct flight from Mitchell. If the demand is there, the flights will be added.

22 thoughts on “Yes, We Have an International Airport”