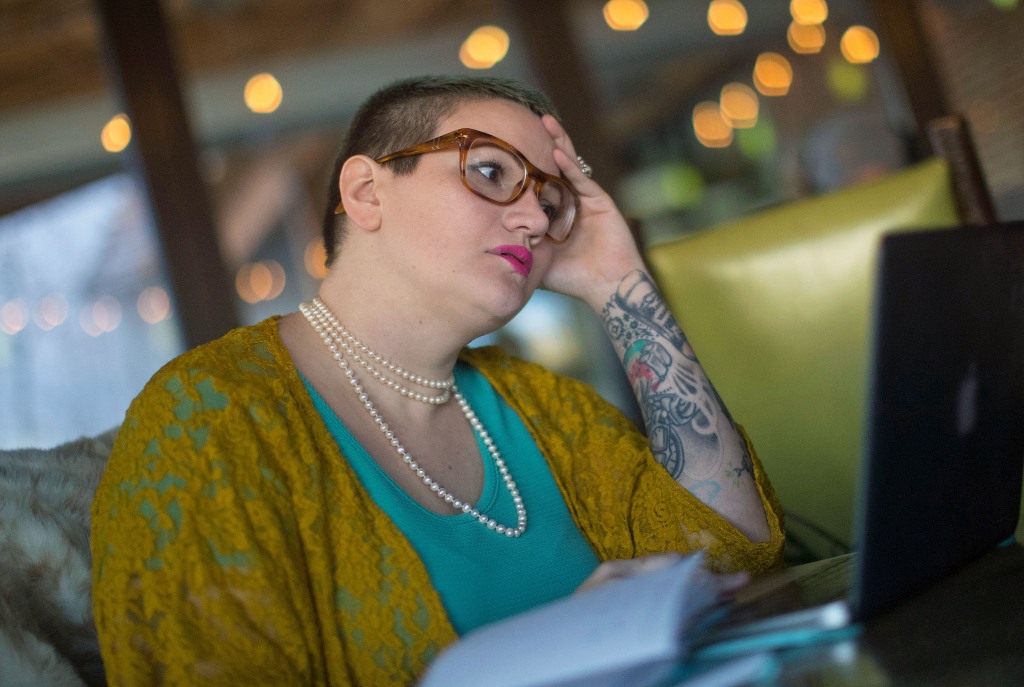 How does a young beauty school graduate move from one state and get a job styling hair in Wisconsin? For Cassie Mrotek of Milwaukee, the answer is slowly. Very slowly.

At age 18, Mrotek felt pressure from her family to go to college. “I didn’t know what I wanted to do, but I enjoyed doing my friends’ and family’s hair.”

While beginning her studies at the Aveda Institute in downtown Milwaukee in 2004, a good friend said she was moving to Florida. Would Cassie like to go along? She jumped at the chance and moved to St. Petersburg, signing on with an accredited beauty school there.

Florida wasn’t the dreamland she imagined, so Mrotek moved back to Milwaukee right after graduation. She boarded a plane to Brewtown wearing her graduation dress. That was in 2007.

She came home with her beauty school certificate — which cost $16,000 for a one-year program — her transcripts, 1,200 training hours under her belt and no idea what she wanted to do.

At that time, Wisconsin required 1,800 training hours for a cosmetologist. “I was too young to take anything seriously,” she says. “I went to two salons to get applications and just wasn’t motivated.”

Years went by. She got married. She held a variety of jobs she didn’t like.

A couple of years ago, she quit one of those jobs. She and her husband planned it so that she could take a few months off. She perused jobs and found a position on Craigslist for a receptionist at Salon Thor in Bay View, where she and her husband live. The idea of getting back into the salon field thrilled her. She applied and was hired.

At Salon Thor, 3128 S. Kinnickinnic Ave., she found a welcoming place. They were eager to see her move from the reception desk to a styling chair.

“I really lucked out,” she says. “I thought, I’ve got to be doing this. Get it together.” So she got to work.

Mrotek, now 31, began to pursue her licensing in Wisconsin. That was in January 2016. By March 2017, she remained tangled in a web of elusive transcripts, a state licensing website that she found cumbersome and a system that sets up hurdles rather than pathways to jobs for people like her.

“I’d really love to get this whole process over with and just work!” she says.

According to Wisconsin’s Department of Safety and Professional Services website, to obtain a cosmetologist license, an applicant must complete one of the following:

► Graduate from a course of instruction of at least 1,550 training hours in not less than 10 months in a school of cosmetology licensed by the department.

► Successfully complete an apprenticeship of at least 3,712 hours of practical training and at least 288 training hours of theoretical instruction in a school of cosmetology licensed by the department.

Then, the applicant must pass the state exam.

Mrotek planned to make up the 350 training hours she’s lacking through coursework at Milwaukee Area Technical College and hours at the salon. But when she presented her transcripts to MATC, the grades didn’t correlate with courses in the MATC curriculum.

It was just “a bunch of grades, but not linked to actual courses,” she says. “The transcripts were a jumble.” She’s been working with the school in Florida to get more detailed transcripts.

She concedes that a big piece of the problem is those transcripts. The Florida school closed and reopened in the Tampa area. She’s been playing a lot of phone tag to get the records.

But she’s puzzled by the difference in training hours required from state to state. While Wisconsin requires 1,550 hours, Florida requires 1,200. And some states, such as Massachusetts and New York, require only 1,000 hours.

“It’s just strange. What makes it vary from state to state? And if I move to a different state, am I going to have to go through all this again? I’m doing hair, not saving lives,” she says. In Wisconsin, emergency medical technicians require only 180 hours of training.

Alicia Bork, public information officer for the state Department of Safety and Professional Services, points out that the number of hours required for licenses are dictated by state statute, not determined by the department.

“Additionally, the fees are determined on a biennial basis in which the department analyzes actual cost data over a two-year period to calculate new license fees,” Bork says. “Those proposed fees are then submitted to the Joint Finance Committee for approval.”

Mrotek’s No. 1 gripe with Wisconsin’s licensing system is the lack of guidance people like her are offered. “There needs to be people available to walk you through the process. There needs to be someone who can calmly and clearly explain what you need to do, what your steps are,” she says.

She has called the state when the website didn’t provide the answers she sought. “Every time I’ve tried to do that, it’s been an obvious annoyance — constantly pushing you back to the website. It’s like you’re a real bother. But somebody needs to do that (guide people), because it’s really complicated.” She says she’s left voicemails with the state but has never received callbacks.

The department, Bork says, is in the process of redesigning its website, which is expected to launch this fall.

Mrotek says she checked with another cosmetology school in Milwaukee and found that it would accept what she describes as her jumbled transcripts, but it would take a month and cost her around $4,000. She figures she’s better off at the salon and is hoping the transcript issue is sorted out.

She has signed a contract with the Wisconsin Department of Workforce Development for the full amount of apprenticeship hours — 3,712 — as if she were starting over since her transfer hours from the Florida school have yet to be verified. If those transfer hours are verified, the contract will be amended.

The best-case scenario, Mrotek says, is MATC accepts all of her transfer hours and places her in a class to prepare for the state exam. While taking that class, she’d complete 300 hours of training at the salon.

“But with the issues I am having with my transcripts, I don’t know how many hours (MATC) will accept. It’s totally possible I will have to do the whole thing all over again.”

Mrotek loves her trade, says she’s a fighter and will keep trying to get that license so she finally can have her own chair at Salon Thor. But she sees why other people might not keep battling if they were in her shoes.

“A lot of people might just say, ‘You know what? That was my pipe dream, but just forget about it. I’ll have my friends come to my house and I’ll do their hair — do it illegally.’ I could see that happening.”

Jan Uebelherr is a freelance editor and writer in Milwaukee. She was a Milwaukee Journal Sentinel reporter for more than 30 years.

This story was originally published by the Wisconsin Policy Research Institute.