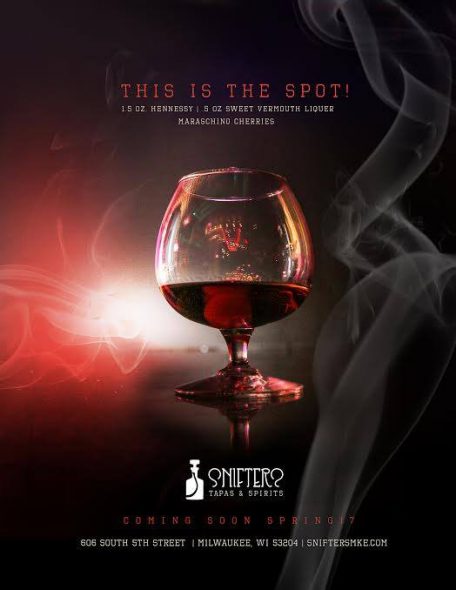 Snifters Tapas & Spirits, a new high-end restaurant and lounge, will open at 606 S. Fifth St. in Walker’s Point this spring. The building was previously occupied by Klik Launja.

Melanie Lawder from The Milwaukee Business Journal reports that the restaurant will feature a fusion of Latin and soul food small plates, and craft cocktails.  Snifter’s will also sell cigars that patrons can smoke on the patio.

Lawder also reports that partners Julio Maldonado, Terrell Morgan and Gabriel Lemus wanted to create a new spot where people can dine on tapas and professionals can conduct business over some good food and cigars. Follow Snifters on Facebook  for more details as they become available.

The Chicago restaurant chain, Potbelly Sandwich Shop, will be opening another Milwaukee location in Mayfair Mall. The restaurant will open on Tuesday, March 21. A statement from the company said the shop will offer its usual line of “toasty, delicious sandwiches… such as the signature A Wreck® and the Grilled Chicken and Cheddar,” and  went on to note:

To celebrate the new opening, Potbelly will be offering a pre-opening “Oven Warming” event on Monday, March 20 from 11:30 a.m. to 1:30 p.m. and 5 p.m. to 7 p.m. A $5 cash donation will get you a sandwich, chips and fountain beverage.  All the proceeds raised during the event will benefit Eisenhower Elementary.

The Mayfair Mall location will offer delivery service Monday through Friday from 10 a.m. to 2 p.m. on orders of at least $25. For more information about Potbelly, hours and menus visit www.potbelly.com.

Ashley’s Bar-B-Que reopened on Tuesday, after being closed for the last six months. The restaurant was closed for repairs since a car crashed into the building last Labor Day weekend. Owner Darnell Ashley spoke with OnMilwaukee.com’s Lori Fredrich about what Ashley’s will be serving:

Ashley’s Bar-B-Que is located at 1501 W. Center St. on Milwaukee’s North Side 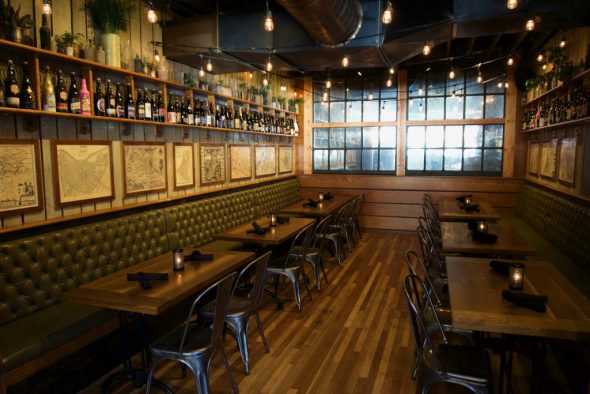 The Map Room at Cafe Benelux. Photo courtesy of the Lowlands Group.

Cafe Benelux, the Third Ward restaurant and bar at 346 N. Broadway known for its Belgian beers and an eclectic menu with some Belgian choices, has reopened after just ten days devoted to renovation. A lot was accomplished to judge by the restaurant’s press release:

The work included the addition of a new “Map Room” dining area, refinishing the floors throughout, updating the bar area, expanding the number of draught lines from 30 to 36—including a ‘nitro’ line—as well as numerous additional aesthetic and mechanical updates.

The renovation features unique reuse of materials, including old wood bleacher seats from Slinger Elementary School that have been reimagined as planter boxes that surround the large atrium. The materials have also been made into shelving in the café’s new Map Room. The design and build of the work was completed by Milwaukee’s Buildit360, who also partnered with Lowlands Group on their recent Downer Avenue and Tosa Village Café Hollander facelifts.

“Although it doesn’t seem like it in light of the recent weather, our rooftop will soon be filled with diners, rather than snow,” said Dan Herwig, director of brand and marketing at Lowlands Group. “We had hoped to complete all three of the remodels before patio season starts, and we’re happy to say that we made it.”

A new Sendik’s Fresh2GO opened Tuesday in Greenfield at 6200 W. Loomis Ave. The 11,000-square-foot gas station/grocery store will offer all the options Sendik’s customers are accustomed to, but on a smaller scale.

Convenience doesn’t have to mean skimping on freshness or quality. With customers increasingly seeking fresh foods in smaller portions, and often shopping daily for snacks and meals, our additional Fresh2GO locations provide an enjoyable and convenient shopping experience.

The Greenfield location is the second Fresh2GO in the area. The first, located in Bayside, opened in 2013. A 17,000-square-foot Hales Corners location will open later this spring.

The newly-renovated Mason Street Grill in the historic Pfister Hotel will feature classic movie-themed dinners, dubbed “Dinner from a Movie”, available only from their chef’s counter menu.  Reservations are recommended for seats at the chef’s counter.

The first menu is inspired by famous dishes from the movie Julie & Julia and is available until April 1st and will include Julia Child’s famous boeuf bourgignon, French onion soup and mousseline au chocolat.

Future “Dinner from a Movie” menus could highlight recipes from Ratatouille, James Bond and The Big Night.  Some months may also feature recipes from events or famous historical figures.

Good City Brewing, which opened last year, is looking to increase its size to include the now vacant space next door at 2108 N. Farwell Ave. According to Biztimes, the additional space would be used for private events and for overflow crowds on the weekends. Good City Brewing is also looking to build a rooftop patio above the space.  Co-founder David Dupee told Biztimes:

We’ve just been overwhelmed by demand in the short nine months since we opened.

He also said that they hope to have the addition and renovations completed by summer and that the new space could hold up to 150 people.

The Brewery has eight year-round beers and a number of other seasonal and specialty beers. For more information about the brews and food menu check out: www.goodcitybrewing.com.

The Shorewood Sendik’s located at 4027 N. Oakland Ave. has closed. The store opened 19 years ago, and was owned by Anne Nehring and her husband John. They say that increasing competition and road construction were the main reasons affecting sales at this location. Anne told The Milwaukee Journal Sentinel: