State Near Average In Taxes, Spending

By Tamarine Cornelius and Jon Peacock, Wisconsin Budget Project - Mar 14th, 2017 03:27 pm
Get a daily rundown of the top stories on Urban Milwaukee

Despite claims that Wisconsin is a high-spending state, it is actually close to average in many measures of revenue and spending among the states, according to new figures from the Census Bureau.

Some policymakers focus on Wisconsin’s ranking on taxes alone when evaluating its revenue compared to other states. But focusing just on taxes means that fees and other charges, which come from residents’ pockets much like taxes do, are not taken into account. Combining taxes with fees and other revenue gives a broader and more complete measure of the money that governments in Wisconsin collect from their residents. 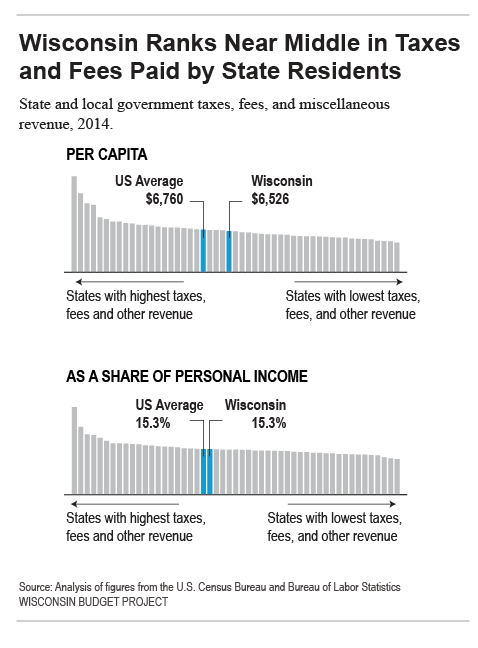 In nearly every measure of revenue and spending, Wisconsin’s rank has dropped significantly over the last decade:

Wisconsin’s rankings in revenue and spending as a share of income have fallen as well. Measured relative to income, the state ranked 21st in taxes, fees, and miscellaneous revenue in 2014, down from 13th in 2000, and 25th in total spending, down from 19th.

Because per capita income in Wisconsin is well below the national average, we typically rank higher when revenue and spending are measured on that basis. 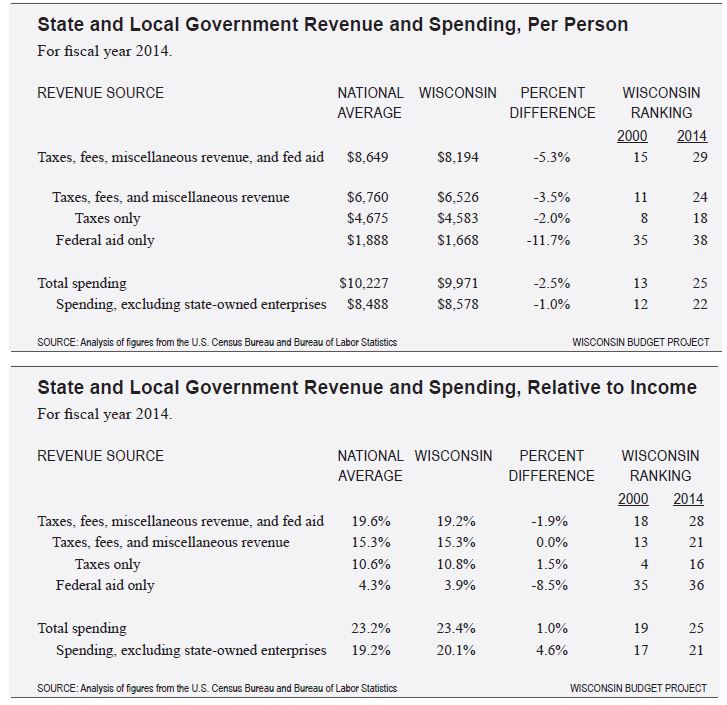 Wisconsin policymakers who advocate for tax cuts should know that Wisconsin governments are already close to the national average in the amount of taxes and fees they collect from residents. Additional tax cuts could jeopardize Wisconsin’s public investments in high-quality education and health care, and make it more difficult to invest in public safety and transportation in our communities. That would hurt our economy in the long run, since those are the very things our businesses and families need to thrive.