Williams’ masterwork has good cast, pacing, but might have more weight. 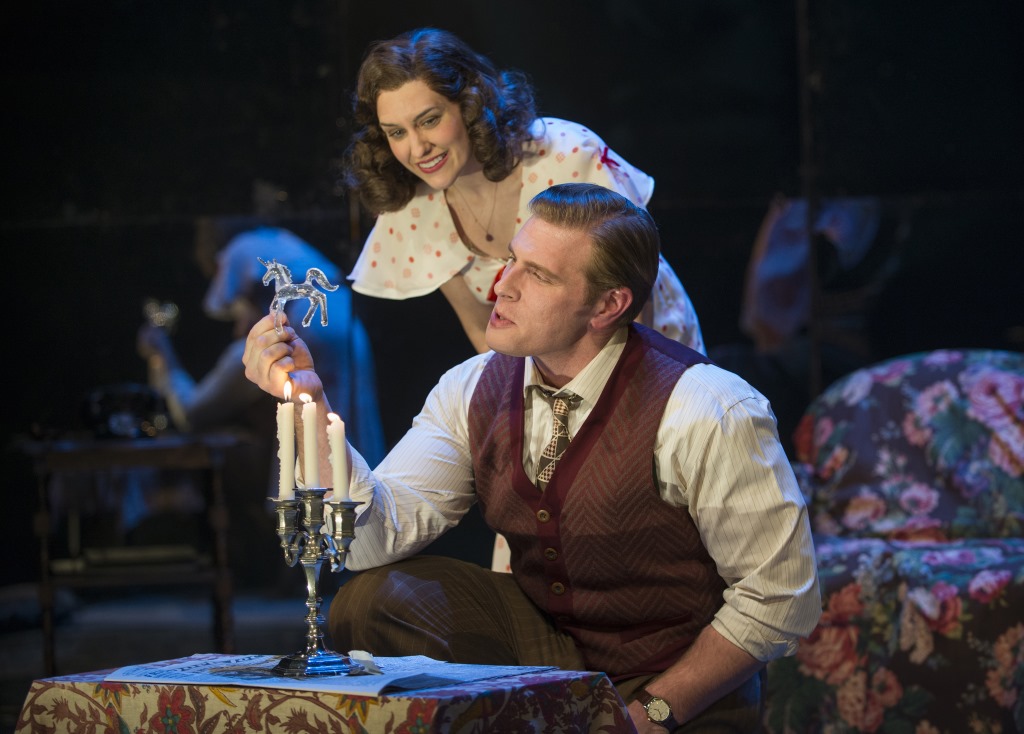 As befits a masterwork of American theater, Tennessee Williams’ The Glass Menagerie receives a loving, deeply thought out – and intended to be deeply felt —  production through April 9 at the Milwaukee Rep’s Quadracci  Powerhouse.

Artistic Director Mark Clements, along with an honest note in the program, has assembled an accomplished cast to carry out his new vision of the play, since this work changes with every serious mounting (Clements did it years ago in Britain).

Williams’ most famous memory play has also created one of the most enduring self-destructive families in literature, one to reinterpret every generation though set specifically in St. Louis between the Great Depression and the impending World War:

Amanda, the faded coquette turned shrill controlling mother; Tom, angry poet son itching to get free; Laura, the awkward sickly daughter that everyone wants to help and can’t, and Jim the Gentleman Caller, a hearty intrusion of bootstraps positive America, not knowing he carries outlandish hopes along with his chewing gum.

Clements brings out an aspect of the poetic musings often skipped over —  a bitter yet biting indictment of the false optimism of the times. There is a deliberate blurring in the staging for this production of Tom as commentator looking back and Tom as scene partner alive to the moment.

A sense of double view also dominates Philip Witcomb’s set, where mysterious mirror scrim and Thomas C. Hase’s pool and pinpoint lighting keep us reflecting on the action even as it unfolds. The duality of the set evokes the tricks that memory plays. Clements keeps the cast moving throughout this environment, every major moment choreographed to the right spotlight.

In my time I have seen Amandas from Jessica Tandy to Maureen Stapleton to well-meaning community theater, Toms from dreamy to ferocious, Lauras shaded from uninformed to sexually knowing (as weird as that may seem). All can offer justifications deeper than just modernizing the dialog. A totally revamped Amanda with a truly crippled daughter occupies Sally Fields on Broadway right now and Milwaukee has also had a strong version at In Tandem two seasons ago.

It is Williams’ human and poetic insights that keep the play fresh more than  familiar every time. Each exploration seems to flash new internal mirrors and re-cut gems. Clements has chosen a classical theatrical approach with naturalism held at bay and professional interpretations for each minute of every scene. The intellectual reading merges with the capacity of these actors to land expertly on every intention.

The production moves swiftly and humor is constant in the finesse. But the moves are so polished that this Glass Menagerie is more sitting on glass than melting us into it – with some exceptions.

For instance, Brandon Dahlquist’s Gentleman Caller is played so straight and friendly as to make some character developments hard to believe, and Kelsey Brennan’s Laura is often more class exercise than a convincing personality, so both worried me. But darn it, Dahlquist and Brennan nail the emotional moments where we believe, hope against hope, that something tingly may come out of this awkward meeting. There are insights in their scenes to make up for the choices that seem pat.

There are exceptional moments from Ryan Imhoff’s Tom, who is also almost dangerously flamboyant in the size of his gestures and melancholy. Yet he brings off comic gems, subtle intonations and a powerful touching delivery of the most famous closing lines in the Williams canon.

Hollis Resnick provides an Amanda despicable and amusing in quicksilver turns, fluttering in her flirtations and telephone salesmanship, familiarly overbearing with her children. Some play Amanda like a cobra biting out her demands, others like a python squeezing her children until they can longer breathe. Resnick is more the second variety of snake, yet with the viper inflections of a constantly disappointed mother.

There are internal contradictions within Amanda, sometimes within the same lines, sometimes a moment that could  convey multiple meanings. Resnick has great polish, but she succumbs to delivering what is on the character’s front burner – this is as much a directorial choice as hers. The play is so good and the interaction so thought out that audiences get involved. But not haunted. It’s hard to carry the flame of this Amanda, this Laura and even this Tom out into the Milwaukee darkness. 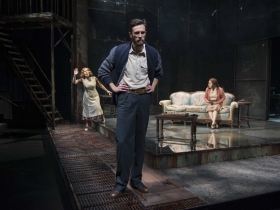 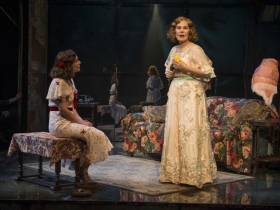 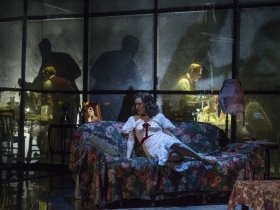 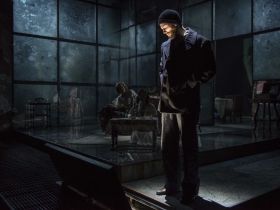 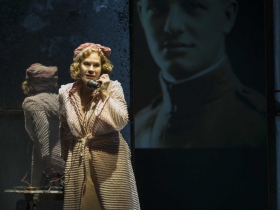 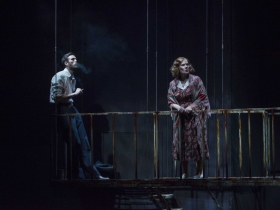