In Tandem Theatre production is smart, subtle and so true to Tennessee Williams.

It’s an enormous temptation, but In Tandem Theatre resisted it. Other professional companies and well-known actors eager to tear up the stage, along with countless national, college and even high school outings, have happily succumbed to lording their 21st century cultural sensibilities over the poetic allusions and dialogue of the 70-year-old The Glass Menagerie.

This was Tennessee Williams’ break-through drama, the most personal in his enormous output, and it has been dissected by university scholars, acting schools, English teachers and yes, even critics, so important is its place in literature since its 1944 premiere. All these camps have worked overtime to set the play up as an exhausted masterwork unlikely to present fresh meanings from its story of the troubled Wingfield family. As this view goes, it’s a work where no secondary messages should be left untapped and these learned insights must now be added to new stagings to refresh the play’s jaded Freudian motors of domineering parent, false dreams coming out of the Depression, and guilt for those abandoned in son Tom’s flight from an emasculating St. Louis apartment.

The symbolism of every mention of candles, moonlight, jonquilles and Southern manners has been thoroughly examined in academia and theater columns, as are the recurrence of the phrase “in love with long distance” and the way the Gentleman Caller assures the shy crippled Laura he is “not made of glass” just before he shatters her illusions of romance.

So these days it’s almost unheard of to trust the raw Williams, to retain fidelity without intruding commentary on his original text, insights and intention, to let feelings and understanding sweep up and out from the audience rather than be imposed by the know-it-alls. Who can simply let Williams’ menagerie of real human beings be seen for themselves?

When that happens, run to it. This is the artistry offered by In Tandem Theatre’s production through October 19 at its Tenth Street Theater (628 N. 10th in the back of the big pink church on Wisconsin Avenue). Without showboating — in fact, making a series of choices that respect the ensemble rather than worrying about pleasing the pre-conditioning — and without concern about putting her own individualized stamp on the proceedings as directors often do, Mary MacDonald Kerr is leading a direct and defiantly non-dreamy interpretation.

Since a major name in theater, Angela Iannone, is embodying Amanda, patrons know she could indeed cut loose in dramatic torrents and show us the extremes, the harridan mom telling her adult children how to chew their food, pushing on them her past society glory. The actress could easily indulge these diatribes and fantasies of a cotillion imbued life and offer a portrait of American Momism at its worst.

Instead this is the fastest, tightest Amanda in memory, with a deep understanding that what strikes the audience as abnormally controlling behavior is simply everyday routine and fatalistic hope for Amanda (an observation that artists can occupy and academia misses). In this production, Amanda is so conditioned to past standards of Southern civility that she never lets her disappointment in her children come out before strangers — but just wait until the doors are closed!

It‘s a subtly more amusing and touching Amanda than usual. What makes Iannone such a great performer is knowing when a stiffened back and glancing look can reveal more than all the scene-chewing antics that dominate so many interpretations of this play. To make us feel for her failures while detesting her demands is exciting creativity that violates familiar postures.

Likewise, in sequences where Tom is the put-upon son forced to give mother as good as she’s dishing out, and laughing up his sleeve at her pretenses, John Mundschau Glowacki can unleash anger and amusement in full counterweight to Iannone’s Amanda. He is more active against his mother — that’s actually in the dialogue but usually vanishes because of the tendency to exaggerate the stifling weight of Amanda.

For much of the play Tom is also the older, sardonic narrator looking back over time. The actor hardly changes age but adjusts to a more presentational style of wry commentary, a smooth approach that fits him and lets the audience see through his eyes. It’s not the only way to play this part but it works well here, as does the convincing low-key approach of Grace DeWolff as Laura.

This is a role in which actresses too often try to invest the whole weight of a world of crippled lost souls into one overly shy girl with a limp and secret longings. But this Laura is simply present, private and human, seeking to struggle by on her limited dreams (her miniature animals of glass and her phonograph memories of a departed father) with flashes across her face of hope despite knowing how much she disappoints her mother. In the first act, she has to heed Amanda’s anger, but in the second act DeWolff lets us peek at sparks and glimmers that crush us more for their simple wistfulness and certain failure. It is a performance more effective for being so natural.

Perhaps in keeping with the idea of letting the audience see the play rather than tell them what to see, Rick Pendzich as the Gentleman Caller avoids the excess of American self-improvement enthusiasm that so filled those times and that Williams is clearly calling out. Instead a good actor tries for a measured, more controlled conversational ego, hardly realizing until the last moments that his social attention to Laura is raising false expectations. This is a conscious acting decision by Pendzich in a production that avoids the overly demonstrative, but it is the one character journey where we deserved to see more going on internally.

Almost any production reminds patrons that The Glass Menagerie is a great drama, so a danger of excessive praise surrounds every decent outing. But this one stands way above the pack because director and actors trust what Williams saw and lets it flow over us, ignoring layers of over-expectation and over-interpretation built up over time to get between the audience and the Wingfields. 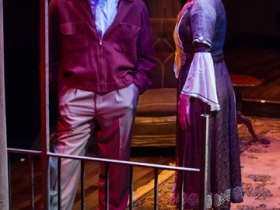 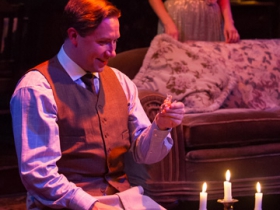 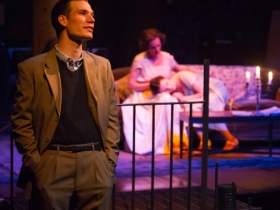