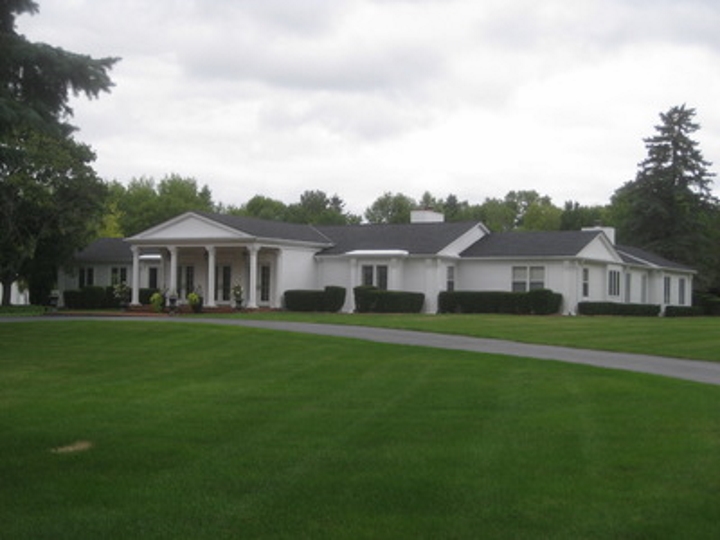 The Milwaukee Journal Sentinel has been covering the case of James Henry Herrick, the Robert W. Baird executive who the paper linked to substandard city apartments, some declared “unfit for human habitation,” which were registered under Limited Liability Corporations to obscure his ownership and shield him from liability.

It took some sleuthing for reporters to tie Herrick, who lives in River Hills, with the ownership of derelict apartment buildings in the City of Milwaukee, some of which had been foreclosed and condemned. This was in part due, the paper says, to Herrick having listed another individual as his registered agent, in one instance without the other’s knowledge.

But the true ownership of JHH Enterprises, LLC was easily traced to Herrick at his $1.1 million home in River Hills, because the property tax bills for the rental properties were sent there — and ignored, until the reporters showed up.

The Herrick residence on W. Dean Road, is, true to form, itself owned by a trust — the Herrick Revocable Trust, with James H. Herrick and Daphne A. Herrick listed as registered agents. James H. Herrick is an executive with Baird, the Milwaukee-based financial services firm that does millions of dollars of business with the City of Milwaukee. He has been employed at the firm since November, 1986.

Reporters Cary Spivak and Kevin Crowe determined that Herrick should have listed his interest in the real estate corporations in his FINRA filing of his professional credentials and affiliations.

Mayor Tom Barrett mentioned the Baird connection in a shaming speech, when he heard that Herrick owed the city over $100,000 in unpaid taxes. (The taxes have since been paid.) The city is a client of Baird, he noted, adding, “You would think that a client would be interested in knowing that there was a principal who was not disclosing activities that hurt the city.”

Baird later amended Herrick’s filing to show ownership of the properties, and presumably “counseled” him. Last month, it was announced that Herrick was selling off his remaining units, which he had managed, mostly in his spare time, from his five-acre estate in River Hills.

One of the advantages of the five-acre minimum lot size in the Village of River Hills is that an architect can pretty much send a building’s wings in any direction without fear of encroaching on a neighbor’s view or property rights. Nobody really cares, anyway, since the houses here are invisible for most of the year, hidden by vegetation, winding driveways, strategically placed earthen berms and considerable setbacks from the street.

The single-story “Ranch House,” which was practically unknown in non-rural areas prior to World War II, became in vogue in the postwar era, with River Hills providing an ideal setting for this example, an 11-room, 5,292 square foot whopper built in 1951 at the northeast corner of W. Dean and N. Range Line roads.

The building’s facade undergoes 30 changes in direction before it comes full circle to wrap the structure with 400 linear feet of exterior wall. This affords the opportunity for numerous bumps, bays, setbacks, reveals, protrusions, stoops and other appurtenances including a porticoed entryway that, in a grander and better-proportioned residence, could have been a porte cochere. Here, instead, it serves merely as a pleasant if somewhat presumptuous front porch.

The grounds are framed with a ragged herbaceous border of “who cares what it is as long as it hides the house from the street?”

This scrubby screen takes up over 1,000 linear feet along Dean and Range Line roads, and serves its purpose, but does not contribute to the stately magnificence one would expect of landscaping so near the Milwaukee Country Club, especially when you consider that the Steins — the Garden Center Steins — live down the street, on the riparian side of Dean Road, thank you, where people have a better reason to be proud of their property, thanks to the mighty Milwaukee River.

Within this ring of peripheral scrub encircling the Herrick grounds lie acres of mowed lawn, until one finally approaches the great manor, which is itself wrapped in a nearly continuous cube of yews. These Taxus media look as if they were pruned by a Marine Corps barber. The grounds of a Country Estate ought not be treated as a bootcamp for vegetation.

Herrick should look within his own block for botanical inspiration, for he need only trespass through a few of his neighbors’ back yards to note the Garden Conservancy-approved plantings of former House Confidential Honoree Donald Baumgartner, and the magnificent work being done to contain invasive species at the 35-acre Lynden Sculpture Garden. Nothing would be sadder than to see a Henry Moore mother-and-child sculpture strangled by vines of Deadly Nightshade.

Not Merely an Address — a Geography Lesson

The main entry to the Herrick home is on Dean Road, which plays hide-and-seek as it runs west, beginning in Doctor’s Park in the neighboring village of Fox Point, and, after numerous interruptions, finally giving it up at an industrial park at N. 91st St.

More prominent is the road that forms the western border of the property, crossing the Milwaukee River just a few hundred feet to the south, on a stone bridge built under a federally funded Depression-era make work project. Thank you very much, Mr. Roosevelt!

This is Range Line Road, which took its name from its distinguishing geographic characteristic, namely being the border of Ranges 21E and 22E. Just a couple of miles to the south, this road goes by the name of 27th Street, and is the longest street in Milwaukee County. But numbered streets are fatal to suburban attempts at grandeur, so Range Line Road it is.

The Herrick residence has a service driveway off of Range Line Road. Directly to the west spread the domains of Range 21 E. Northbound travel is exhilarating here on Range Line Road, for those with cartographic inclinations, since just a mile and a half north lie the frontiers of Town 9 N. — yes —  the intersection of a Range Line, and a Town Line lies tantalizingly within reach of this home. Here, the town line is called “County Line Road,” and it separates Milwaukee and Ozaukee Counties precisely 54 miles north of the Wisconsin-Illinois border, and exactly 132 miles east of the 4th Principal Meridian.

Range 22E T8Nis a “fractional township,” meaning it has less land area than the standard 36 square miles, yet was large enough to be registered as the Civil Township. The same range in T9N was too small to stand on its own, so it was appended to the Town of Mequon, adding about 13 square miles to its original 36-square mile budget, and giving us the second-largest city in land area in the metropolitan region. Mequon is the fifth-largest city in Wisconsin by area, larger than Green Bay, and smaller only than Milwaukee, Madison, Reserve and Kronenwether.

These intersections of Range Lines (which always run north-south) and Town Lines (which always run east-west) occur every six miles in the state of Wisconsin. All were visited by land surveyors prior to settlement, and marked with sunken four-foot monuments. The one up the block was surveyed in 1835, when this land was awash with the virgin oak and sugar maple trees that dotted an open prairie.

Today we have borders of buckthorn, bentgrass putting greens and hedges of yew. 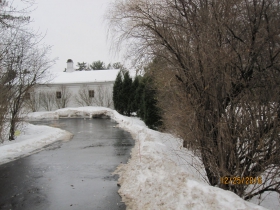 How Milwaukee Is It? The residence is 10 miles north of Milwaukee City Hall