The generous plutocrat's River Hills home is fit to entertain a prince, and actually did. 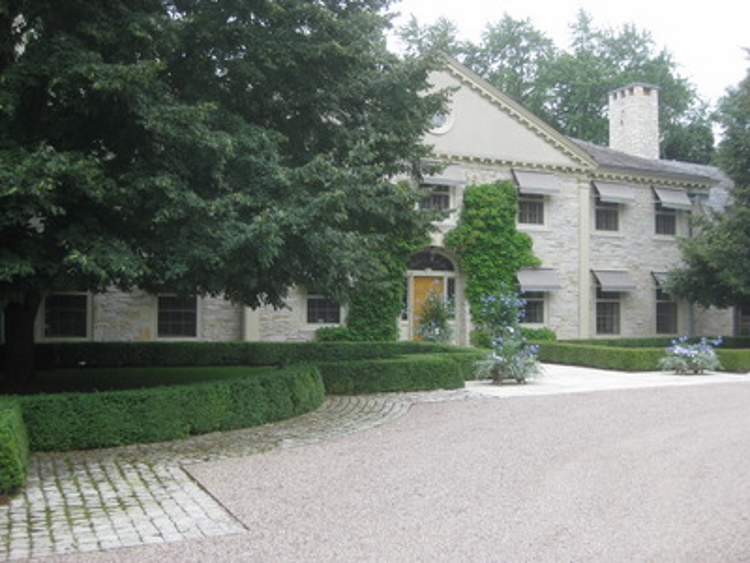 Donald Baumgartner has been much in the news lately. On May 2nd it was announced that the 85-year old executive had initiated an employee stock ownership program for Paper Machinery Company, the firm he founded in 1951.

He could have made more money selling to an investment firm, Baumgartner said. But from experience — his father watched three firms he had sold move away — Baumgartner decided an ESOP would be the best way to guarantee that his firm, with 250 employees here, would remain in Milwaukee.

The move earned plaudits throughout the community, including from Urban Milwaukee Editor Bruce Murphy, who wrote a column entitled “The Generosity of Donald Baumgartner.”

Murphy might dust off that headline once again given the May 16th announcement that Donald and Donna Baumgartner made an $8 million gift to the Milwaukee Art Museum, which he once chaired. The funds will be used to permanently endow the salary for the museum’s director, which no doubt made it easier to hire the museum’s new director, Marcelle Polednik.

What with all this in the news, House Confidential paid a visit to the Village of River Hills, where the Baumgartners live on a 15-acre estate in the heart of the exclusive community.

The home is “almost unseen from Dean Road,” a real estate writer noted in 1969 when the Jesse A. Smith home was listed for sale at $210,000 — a notable figure for the era. “Price Only Hints at Mansion Grandeur,” read the headline. You can still barely see the place, but there is an awful lot of nice landscaping to admire as you pass by.

Smith was a pioneer automobile dealer in Milwaukee. From 1909 until 1931, when he retired to this newly built estate, his firm sold $50 million in Hudson and Essex automobiles from a downtown facility that is now the site of the Library Hill apartments. [See “House Confidential: MPS Superintendent Driver’s Downtown Pad.”]

At the time of his retirement, Smith was the president of the National Automobile Dealers Association. He was “a Republican in politics but not an office seeker” and often seen on the golf links, accounts of the day noted. He called his home “High Acres,” but after his death in 1949, his widow lived on at what came to be called the “Hill Top House.” She lived there for nearly two decades more, with over 100 oriental rugs, until her death in 1968.

“It takes a special type of buyer,” for a property like this one, the real estate agent told the reporter at the time of the home’s sale. “It was built for entertaining,” recalled the architect, Thomas Van Alyea, one of Milwaukee’s premier mansion builders. Just 30 years after the home was built, at a cost of $125,000, Van Alyea doubted that the residence could be recreated for four times that sum. It possibly couldn’t be recreated at any price, he lamented, since the materials and the skilled workers no longer existed.

The home is built of Lannon stone, and has numerous high quality surfaces, including a brick-floored garden room and a spectacular entryway with black and white checked marble tile and a floating staircase of which Van Alyea was particularly fond. It is the sort of thing the Beverly Hillbillies would have constructed, if they had the cash.

Separate men’s and women’s cloak and bathrooms flank the entry door, the better to adjust oneself before being greeted by your hosts for the evening’s entertainment. A reporter noted a “huge living room, garden room, library, formal dining room, breakfast room, kitchen, butler’s pantry and assorted service rooms on the first floor.” Upstairs are four bedrooms, including the master suite with an adjoining sitting room, two bathrooms, and its own balcony overlooking the garden. There are also three bedrooms for live-in servants, if such people still exist.

In addition there is a tennis court and a swimming pool on the manicured grounds. Accessory buildings include a tennis/pool house and a large barnlike structure, complete with cupola, for storing all the equipment needed to maintain a 15 acre estate. Attached to that building is a greenhouse/potting shed.

Imagine the laughter that would erupt at a party when a guest accidentally stumbles into the potting shed when he was expected for cocktails in the tennis house! Wait till the boys at Milwaukee Country Club hear this one!

Altogether the home has 17 rooms in 8,674 square feet of finished living area, with six full and three half-baths and five fireplaces. The home is valued at $600,000 for the approximately 15-acre parcel (River Hills records on property square footage are sketchy), and $2,300,000 for the improvements for a total assessed valuation of $2,900,000. The tax bill is $70,094.88 (after a $5,438 School Tax Credit), and is paid in full by Benjamin J. Abrohams, Trustee. (This is another rich guy house owned by an unnamed trust. Abrohams is a retired partner at Foley & Lardner, the Milwaukee law firm that advised Baumgartner on the sale of his company.)

The home’s orientation is opposite most of those in River Hills. The front of the mansion faces away from the street but toward the Lynden Sculpture Garden just 50 feet to the north. The main entry is served by a circular driveway and looks like the front of a mansion, no doubt. But because the home sits way back on its lot on the crest of what passes for a hill in River Hills, the architect had the “garden” side of the residence face the street, not that you can see it for most of the year. There are pools for swimming and for reflecting in the yard. The property has views of the Milwaukee River, but does not have frontage, like the neighbors across the street. To solve that little problem, Baumgartner had his own recirculating river installed on the property. Water from the ponds irrigates the lush lawn.

There is also an excellent low stone wall that fronts the property. It’s not very tall — about three feet high — but it is very well constructed and is certainly a step up from the faux-rustic cedar fences that so plague this particular stretch of Dean Road. I recall that the wall was installed around the end of the 20th century, and it must have cost a good $75,000. 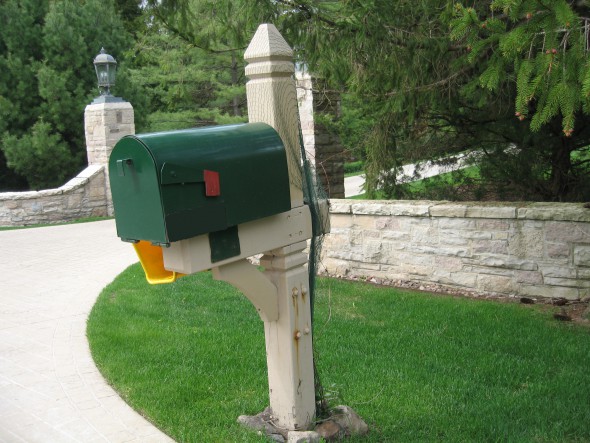 The mailbox is oversized, the better to handle a large volume of annual reports and Trust Company statements. It is of conventional issue, mounted on an unassuming cedar post and is painted forest green. In its restrained simplicity the mailbox provides a noted contrast to some of the more garish examples one can note on this street, including those ghastly fiberglas numbers with painted pheasants on the side, or the cartoony doll house mailbox of neighbor Michael White, who lives on Bradley Road not far away. [See House Confidential: The Three Mansions of Michael White.]

The mailbox and the stone wall are but two of many landscape touches around the home, which will be open for tours on Garden Conservancy Open Days, July 16th. According to the organization:

This fifteen-acre estate is composed of interconnecting pathways circumnavigating the property; man-made ponds and a recirculating stream; parterre, fountain and sculpture gardens; and woodland gardens colonized by ferns, lilies, wild geranium, ginger, sweet woodruff and spring ephemerals. The 1929 English Georgian-style residence sits hilltop, overlooking five acres of manicured lawn irrigated with water from one of the two ponds. Formally clipped evergreen hedges define the foundation gardens and terraces, as well as the pea gravel pathways and circular drive. The numerous tree, shrub and perennial species throughout the property make for enchanting surprises every step of the way.

I have been at other River Hills estates on Open Days, and was often underwhelmed by much of the landscaping on view. Very often the homes and their immediate sight lines would be commercially landscaped and maintained, while the ever-important borders would be left to invasive plants like garlic mustard, buckthorn, boxelder and honeysuckle.

Not so this residence. The crews here seem to have achieved the impossible by eradicating or keeping a lid on these dreadful species. This is a remarkable accomplishment which even the Bradley family with all their money have not been able to accomplish next door at Lynden.

Fit for a Prince?

During Baumgartner’s tenure as the head of the Milwaukee Art Museum board of directors, he presided during an exhibition here in September 2002 of Leonardo Da Vinci‘s “Lady With Ermine,” on loan from the Czartoryski Museum of Poland.

His Royal Highness, Adam Karol Jezus Maria Józef Franciszek Salezy and all the Saints Czartoryski, a descendant of the Grand Dukes of Lithuania and a maternal first cousin to King Juan Carlos I of Spain, came to town for the opening of the “Splendors of Poland” exhibition.

At the time I met the prince, I wrote that he was “staying at an undisclosed castle in the area,” which I believe was the Baumgartner residence.

The Village of River Hills was newly incorporated and this home was just being readied for occupancy on July 11th, 1930, when police chief Louis C. Antisdel went to the property to investigate reports of a prowler. He wound up falling into a 30 foot deep open well on the property, one of its original water features, apparently. The chief was able to climb out thanks to the rough surface of the well stones.

Antisdel was known as the “Golden Rule” chief. He didn’t carry a gun or a baton, and at the time he fell into the well, the village had yet to book its first arrest.

Antisdel had an explanation for his apparent soft-on-crime stance. “There is not a bootlegger in the district, or, for that matter, a grocery store, a bank, or a filling station to tempt bandits.”

Although the open well on the Smith estate has been capped, some other things about River Hills — like low crime and non-existent services — still remain. There is no public land in the village, with the exception of a miserable little patch around the village hall, which, incidentally, was partially constructed with funds from the Federal Government’s Public Works Administration. The same socialist program also gave Mequon its Town (now City) Hall. Both communities are reliably Republican.

River Hills is the only community in Milwaukee County to have no official Independence Day celebration. Instead, residents of the community rely on the Milwaukee Country Club for its annual fireworks event. 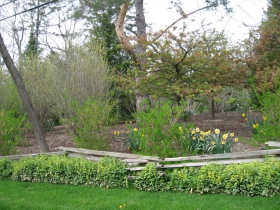 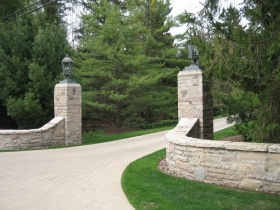 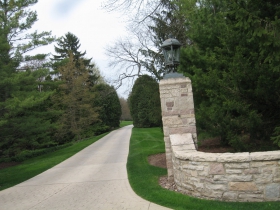 How Milwaukee Is It? The residence is 11 miles from City Hall.