When you're moving from job to job, better to rent. Her Library Hill apartment is right on Wisconsin Ave. 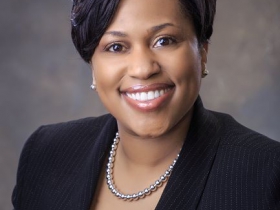 Dr. Darienne B. Driver came to our town in July 2012 as the first Chief Innovation Officer for Milwaukee Public Schools. This July she was named Acting Superintendent, and, on the first of October, was able to delete the “acting” from her title. She has also worked in Detroit; Georgia; and Philadelphia. Such mobility is hardly uncommon for those who toil in the upper echelons of urban public schools. Her predecessor Gregory Thornton was also well traveled before he decamped for Baltimore this year.

The opportunity to jump ship to an ever-different school district apparently makes renting the way to go for such folks. Like Thornton, a House Confidential honoree who lived in Prospect Towers, Driver also resides in a rental apartment.

Her home is in Library Hill (“Your Story Starts Here”), a 140-unit, 2-building complex developed in 1998 by the Milwaukee Redevelopment Corporation, and now owned by the Mandel Group, which has been involved since its conception. Ground broke for the $18 million project that July, just as the then-Midwest Express Center opened its doors for the first time. It occupies a 99,552 square foot lot that takes up three-quarters of the block bounded by W. Wisconsin Ave, W. Wells St., N. James Lovell Dr. and N. 8th St. The only other structure on the block is the headquarters of the Milwaukee Fire Department and Engine 2 of the First Battalion of the MFD. 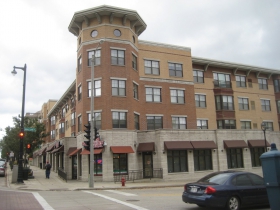 Like the convention center, Library Hill was hailed at the time as a key to the “revitalization” of the west end of Wisconsin Avenue — a process which is still underway by the redevelopment corporation, which has been known as the Milwaukee Development Corporation since 2003.

At first, only 73 units were planned, but that number nearly doubled in the final construction, a rare example of a big plan getting bigger in this town. It received government support in the form of infrastructure improvements, and received bond guarantees and is part of Tax Incremental Financing District #30. Otherwise, it very likely would have remained unbuilt.

Today, only 5 apartments are listed as being available in the building, which suggests it’s quite a success, especially considering that folks who make nearly a quarter million dollars a year, such as Driver, choose to live there. Whether Driver, 36-year old and single, might buy a house to take advantage of a mortgage tax deduction is up to her and her financial advisors, now that she’s making the big bucks.

The building has one-, two- and three-bedroom apartments arranged around a central courtyard which is publicly accessible, but known to few. Why, there is even a gas grill out on the patio, landscaped with care and well-tended. Driver can get together with her fellow tenants over brats and discuss the latest Packer game.

The 8th street buildings are bordered with grass, but a heavy hand on the road salt has killed much of the vegetation, which has been replaced by rock.

The neighborhood (which could use a grocery store, that’s for sure) is still not a housing hot-spot, but Library Hill has done its part to increase the downtown population. You still get a feeling, though, that most of the residents drive. The building does not appear to generate as much pedestrian activity as, say, East Pointe Commons, also developed by MRC and owned by Mandel.

The area around “Library Hill” was rarely known by that name before this building was built, but anybody on a bicycle can tell you it is fitting.

Back in 1929, a visitor to this side of the 700 block of W. Wisconsin Ave. could engage in a shopping frenzy. You could buy a Hudson or Essex motorcar at Jesse A. Smith Auto Company’s corner showroom at 700 W. Wisconsin, then head next door to Century Sales Co. and buy a boat at 704. James Segal had a restaurant next door at 710, while the “Friendship Club” operated upstairs. You could grab pet food at the Milwaukee Pet Stock Store at 718 Wisconsin Ave. and have it shipped to your home by the Orange Express and Transfer Co. at 718-½ Wisconsin Ave. Off then, to Behan’s Stationery Store and a quick do at Mrs. Bertha Ackley, hairdresser at 720, while she heads off to Independent Dye Works at 722 for some goods to tint that tiny little gray patch. Time next for a meal at T. C. Bergeron restaurant at 724 while waiting for your friend, who is getting a shave at Max Miller Barber. All this walking is hell on your soles, so Peter Vasso will do a quick job at his shoe repair shop at 728. A visit to the Wisconsin Linen and Lingerie Shop at 730 could be followed by a sweet visit to Geo. H. Herro, Confectioner at 732. And, then to bed in your nice new undies and sheets. 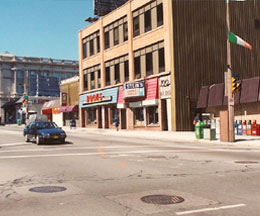 The site before Library Hill was built. Photo from Milwaukee Development Corporation. .

By 1974, things had changed considerably on the block. The same trip would take you past the offices of the Milwaukee Bucks (Professional) Basketball Team, a Radio Shack Store and a large building at 704 that held the Co-Ed Beauty College, Ardney, Inc., manufacturers of fur products, the office of the National Association of Letter Carriers, The Daily Reporter Newspaper, Midwest Stamp, Project Equality and the Greater Milwaukee Conference on Religion and Urban Affairs. Yet there were mostly vacancies in this building.

Further up the block were Mom’s Restaurant (706), Schroeder’s Books and Records, an excellent used and rare bookshop, at 712, McCabe’s Bar (716), Burger Chef (722), In Scene Books [more like obscene books] (730) and Supreme Hat Shop and Shoe Repair. Apparently the only thing you could do on the block in 1974 that you could have done in 1929 is get your shoes fixed.

By 1989, the retail had diminished to Stein’s Inc. Loan Office and Jewelry (now located across the street), Schroeder’s, the Grand Avenue Pub Tavern and Restaurant at 716, Hardee’s (722), the Irish Baker (730) and Muellenbach Fashions, Inc., a bridal wear concern. By its last year, the block held the bridal shop, Allwood Furniture, Stein’s, John Garekis tavern and Pizza Hut. (You can still get pizza on the corner today.)

Today, Library Hill is assessed at $470,500 for the land and $13,847,500 for the improvements, for a total of $14,318,000. The assessment is up $2.3 million since 2006, a time of historically high property assessments in Milwaukee. This is still less than the cost to build the place, but all in all it has been a good deal for those involved. This includes the $481,162 in property taxes it generated in 2014, paid in full on the installment plan by Mandel. Proceeds of the taxes currently go to pay off the bonds generated by TID #30, which includes this property. The district is near its completion, at which time taxes will go to the various governmental units.

Fun Fact: The building’s proximity to the fire department came in handy last month when a fire erupted in the liquor-convenience store located on the first floor of the building. There was no damage to apartments above and no reported injuries, but the market is closed for the time being while remodeling is underway. According to Ken Marx, who owns the Army Navy Surplus Store across the street, the insurance adjusters threw out everything from the fire — but brought him a salvaged 6-pack, and a bottle of vodka for his partner.

How Milwaukee Is It? The residence is about .7 mile from City Hall, and about 3.6 miles by school bus to MPS headquarters. 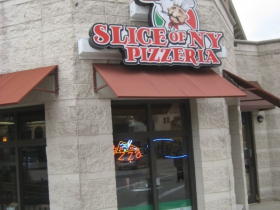 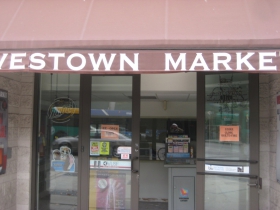 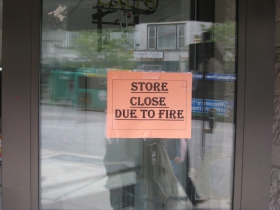 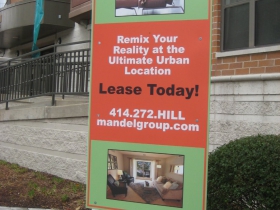 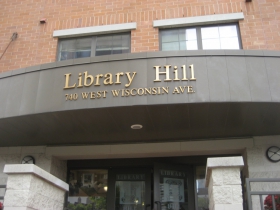