The Curious Politics Of Rural Counties

New voting data shows their power, but makes their trust in Trump a mystery. 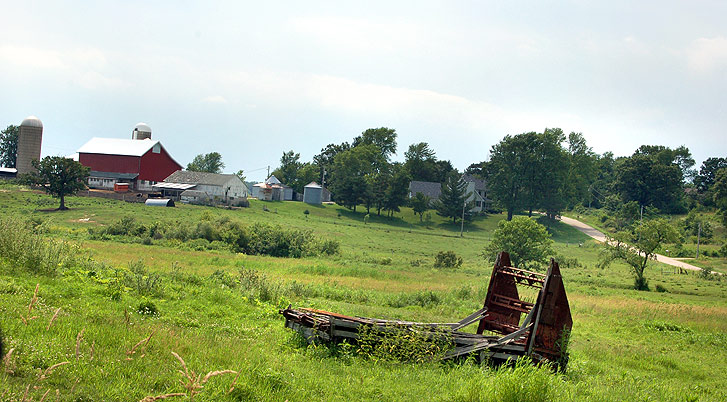 The Curious Politics Of Rural Counties

Donald Trump won the presidency by tapping into a sense of distress felt by people living in less-populated areas. This has a certain irony. Neither he nor his appointees has much in common with the people who put him in office. As is often noted, Trump may be the most urban candidate ever elected president. He has also stocked his administration with people who have gained great wealth from the very same economic changes that have hurt his rural supporters.

Trump won Wisconsin due to a shift in votes in places like Juneau County. Analysis from the Wisconsin Taxpayers Alliance helps make this point. WisTax ranked Wisconsin counties by the size of the swing from Barack Obama in 2012 to Trump in 2016 and created the map reproduced below. In counties shown in dark blue, Trump gained at least 10 percentage points compared to Mitt Romney. Counties shown in light blue had a pro-Trump swing of 7.5 points or more. 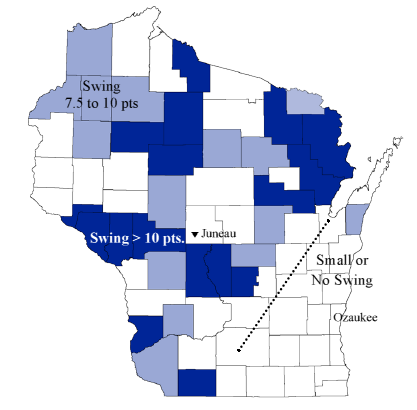 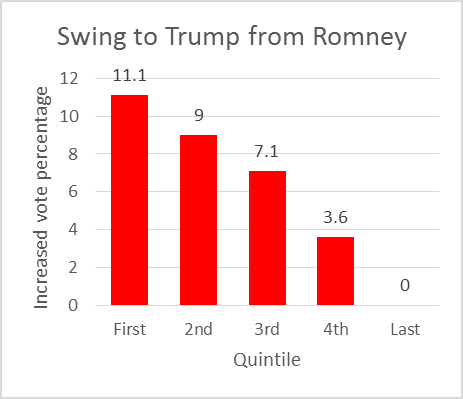 Swing to Trump from Romney

As the next graph shows, the counties with the largest swing had the smallest populations. 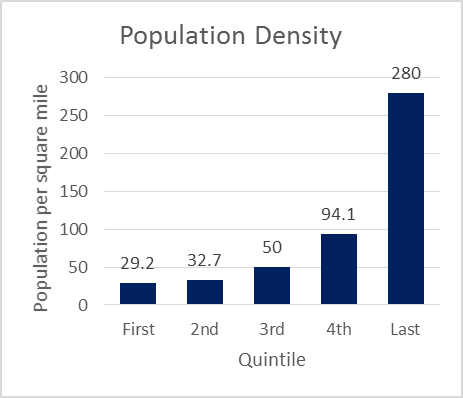 Not only did the Trump-swinging counties have the lowest population densities, but the population was continuing to shrink, as shown below. 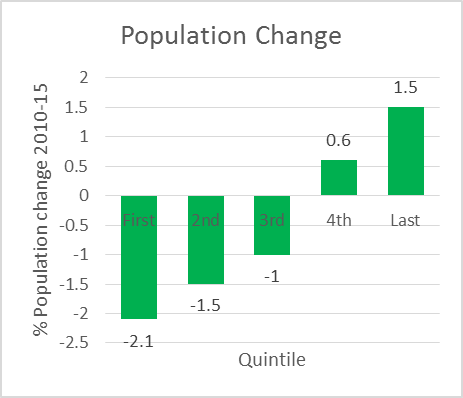 Finally average wages are lower in the counties with the largest swing to Trump. 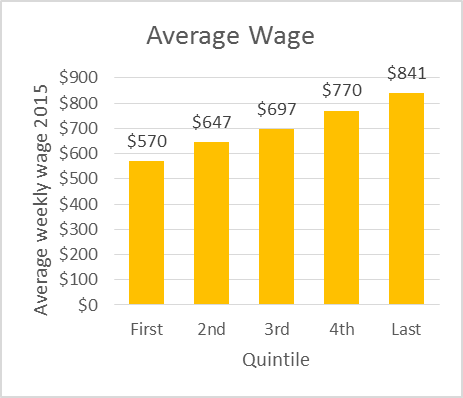 These results are consistent with other findings both nationally and Wisconsin, some of which I described in an earlier column. Among Wisconsin counties, the stronger the swing from Obama to Trump the lower the Gross Domestic Product (GDP) per capita. Nationally there was a much smaller number of counties voting for Hillary Clinton, but these counties accounted for 64 percent of the U.S. GDP.

In the past year, research has been published showing a decline in life expectancy among white Americans, particularly those without college degrees. The principal causes can be regarded as self-inflicted—alcohol, drug use, obesity, suicide. The Economist magazine recently made the connection explicitly by publishing a scatter plot showing a strong correlation between a weighted index of health outcomes (obesity, diabetes, heavy drinking, physical exercise and life expectancy) in counties to their shift to Trump.

In recent years, there has been growing research on inequality. In the words of a recent study by the economists Thomas Piketty, Emmanuel Saez, and Gabriel Zucman, those at the top have reaped most of the rewards of a growing economy:

Average pre-tax national income per adult has increased 60% since 1980, but we find that it has stagnated for the bottom 50% of the distribution at about $16,000 a year. The pre-tax income of the middle class—adults between the median and the 90th percentile—has grown 40% since 1980, faster than what tax and survey data suggest, due in particular to the rise of tax-exempt fringe benefits. Income has boomed at the top: in 1980, top 1% adults earned on average 27 times more than bottom 50% adults, while they earn 81 times more today. The upsurge of top incomes was first a labor income phenomenon but has mostly been a capital income phenomenon since 2000. The government has offset only a small fraction of the increase in inequality.

One lesson of the recent election is that inequality has a geographic component. While it certainly is a problem for large cities, growth has largely centered on big urban areas. Many people outside the cities feel left out. Trump’s success resulted from his recognition of this and his promise to solve the problem.

There are reasons to be skeptical about Trump’s ability—or desire—to reverse the fortunes of the people left behind. Take income taxes. Shortly before November’s election, Trump released a revised version of his plan to change the federal income tax. The proposal would cut tax rates at every income level, but by much more for the highest earners both as a percentage and in absolute dollar terms. The table below shows the effect on after-tax income calculated by the Tax Policy Center. 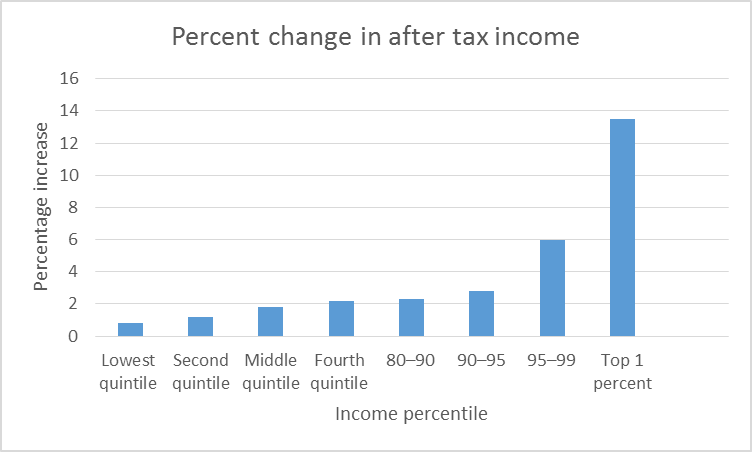 Percent change in after tax income

Standing alone, Trump’s tax proposal would make the federal tax system more regressive, meaning poor people would pay a larger percentage of their income than rich people. It would also create a huge new deficit. If the deficit were filled by cutting social welfare programs, such as Medicare, Social Security and Medicaid, the regressiveness would be still greater.

Thus, Trump’s most recent tax proposal would do far more for people in his tax bracket—and those of his cabinet picks—than for, say, the voters of Juneau County.

From a high-altitude viewpoint, what has befallen Juneau and other rural counties is an extension of a long-term trend. A 1981 article, entitled “Agricultural employment: has the decline ended?” reports:

In 1870, almost 50 percent of employed persons worked in agriculture and one farmworker could only supply five people with farm products. By 1980, just 4 percent of the employed were in agriculture, and each one supplied food for nearly 70 others.

As for the report’s question — has the decline ended? — we now know the answer is “No.” By 2012, agricultural employment had dropped to just 1.5 percent of American workers. The cause, of course, was not a collapse in demand for agricultural products. Rather, it was increased productivity: mechanization meant that fewer workers were needed. Towns built to serve the needs of farmers found the number of their customers declining.

A lucky few of these towns were able to attract manufacturers looking for a relatively cheap, but hardworking workforce. These towns grew into small cities, but their dependence on one or two employers left them especially vulnerable to the fortunes and whims of these companies. Also, as with agriculture, increased industrial productivity meant that manufacturing employment could decrease even as output increased. 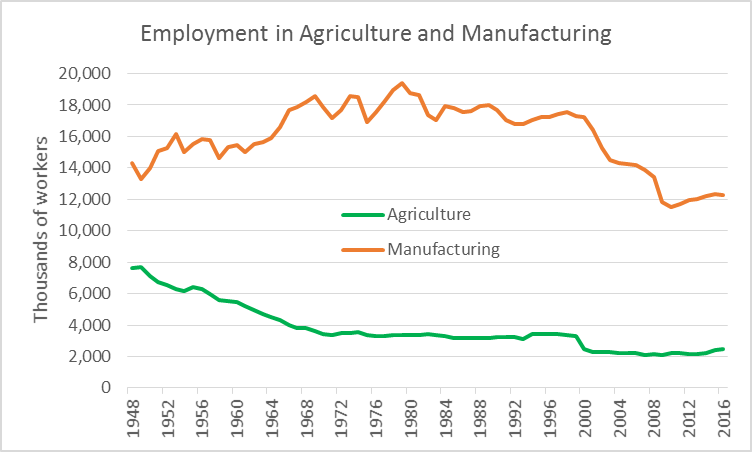 Employment in Agriculture and Manufacturing

Part of the reason for the sudden prominence of rural decline in our political scene is likely Trump’s skill in picking up on the mood in the regions left behind, identifying supposed villains (China and Mexico) and claiming, without much detail, that he has a solution (re-writing trade pacts and keeping out immigrants).

The election shows that rural counties are in play and willing to switch their votes. This realization helps explain why Governor Scott Walker recently proposed to increase aid to rural school districts. Are Democrats able to come up with a plan that would actually help these areas?

2 thoughts on “Data Wonk: The Curious Politics Of Rural Counties”