What Do Trump’s Voters Want?

The recent election pointed out the growing divide in American politics—and American society. What do we know about the Trump voters, what motivates them, and what Democrats can do to reduce that polarization?

Data developed by the Brookings Institution is useful in gaining a geographical picture. The chart below has dots for over 3,000 counties. Counties won by Donald Trump are shown in red and those won by Hillary Clinton in blue. The vertical scale shows the percentage of people who live in urban areas versus those in areas classified as rural.

The horizontal axis shows county populations. Note that this scale is logarithmic, so that every vertical line marks a population ten times larger than the previous line. 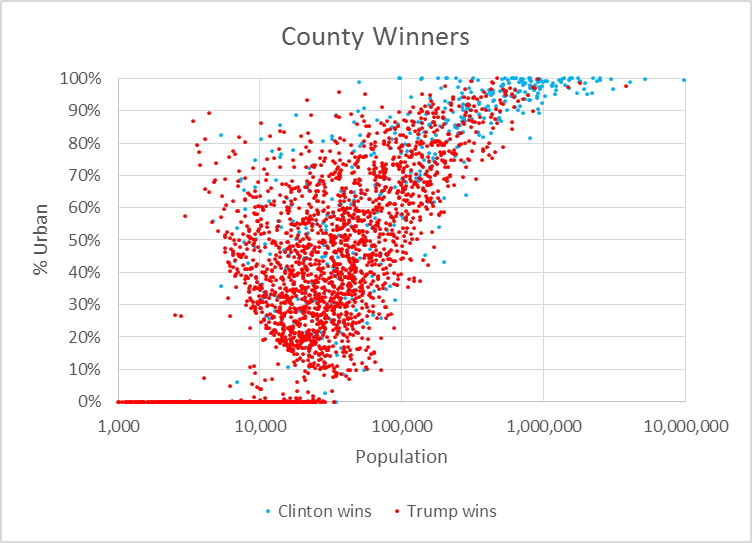 Clinton completely dominated counties with large cities. Unfortunately for her, Trump took a commanding lead in rural areas and those with smaller cities. Compared to the 2000 Bush–Gore race, a higher percentage of counties went Republican, as shown in the next graph. 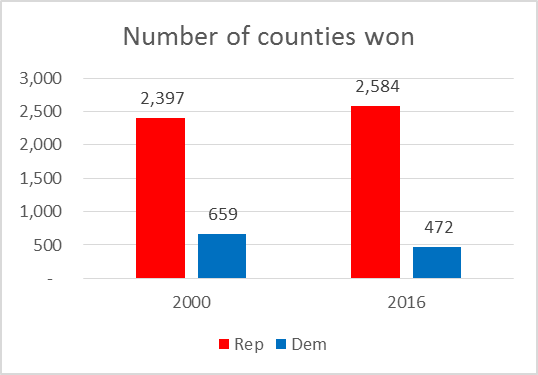 297 counties that had supported Gore shifted to Trump, while 110 moved in the other direction. The counties moving to Trump were much smaller, representing seven percent of the US population. Those shifting to Clinton were substantially larger, containing 15 percent of the population. (And Clinton’s popular vote margin was much larger than Gore’s.)

The same pattern was repeated in Wisconsin. Comparing Wisconsin’s two-party 2016 election results to those from 2012, Trump’s percentage vote was higher in almost every county than was Mitt Romney’s. In the next graph, counties above the zero per cent horizontal line are counties where Trump got a higher percentage of the vote than did Romney. Only in Dane, Milwaukee, and the two Milwaukee suburban counties of Waukesha and Ozaukee did Trump lag Romney.

The graph also plots the Trump jump against each county’s average weekly wage. The dotted line plots the trend: the lower the wage, the more Trump gained on Romney. Despite considerable scatter, the relationship is statistically significant and accounts for about 30 percent of the variation. 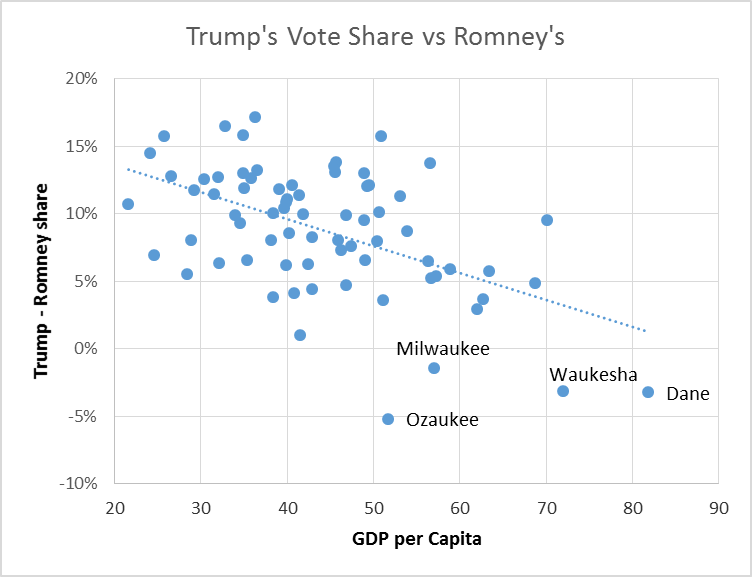 Another indicator of this effect comes from the Brookings study already mentioned. The chart below shows the fraction of Gross Domestic Product (GDP) from US counties voting for each presidential candidate in the 2000 and 2016 elections. In 2000 the Gore and Bush counties were nearly equal economically. This year the differences are far more extreme. The most prosperous and productive counties are much more likely to fall in the Democratic camp. The result of this re-sorting is counties won by Clinton accounted for 64 percent of the nation’s GDP. (Note that because 2015 GDP was used for both elections, this difference is due to the realignment of counties, not to better GDP growth since 2000 in the Clinton counties.) 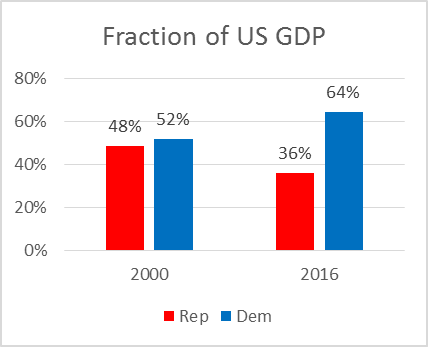 Fraction of US GDP

In 1942, Joseph Schumpeter coined the term “creative destruction” to refer to the way capitalism continually destroyed existing enterprises and replaced them with new ones. In his view, and that of most economists, this process has a net benefit to society, allowing progress to occur. Without creative destruction, new enterprises would be starved for resources.

Unfortunately, particularly in the short run, the process creates losers as well as winners. To an unprecedented degree, Trump country is defined by regions that have lost out in recent economic changes.

Trump won by promising relief. His plan consisted of seven points, four aimed at cutting imports and three at increasing the use of fossil fuels and rolling back plans to combat climate change. He called it “Seven actions to protect American workers”:

The underlying assumption behind this plan is that the pain felt in Trump country is mainly due to unfair trade deals and hostility to fossil fuels. Change those and the jobs will come back.

The Trump plan has generated little enthusiasm among economists. Shortly after the election, the University of Chicago’s IGM Economist survey asked its panel of economists at major research universities to respond to the following statement:

If all of the “Seven actions to protect American workers” in President-elect Trump’s 100-day plan (see link) are enacted, it will more likely than not improve the economic prospects of middle-class Americans over the next decade.

Of those expressing an opinion, 93 percent disagreed; none agreed. This was consistent with a previous October survey. In it, the statement “Adding new or higher import duties on products such as air conditioners, cars, and cookies — to encourage producers to make them in the US — would be a good idea,“ also generated no support.

Whether or not Trump’s plan would be effective, he did emphatically address the major concern in Trump country: the disappearance of good jobs. This concern comes through in the interviews that Katherine Cramer Walsh has conducted in small Wisconsin towns. (See this article and this interview.)

By comparison, consider this list of proposals from a fundraising letter from Senator Patty Murray (D-Washington): “raising the minimum wage, fighting for equal pay for equal work, fighting wage theft, making child care affordable and accessible to every family, and so much more… .“ None of these proposals are designed to create jobs. They may make a job better, but if a company has moved in the search for lower-cost employees, some may be regarded as discouraging jobs. Similarly in her economic plan, Clinton tended to talk around the issue of jobs creation.

In economic policy the next two years present the Democrats with an opportunity to develop policies that will directly address the issue of bringing jobs to Trump country. Being out of power provides a time to develop credible plans.

23 thoughts on “Data Wonk: What Do Trump’s Voters Want?”