By Andrea Waxman, Milwaukee Neighborhood News Service - Feb 7th, 2017 10:08 am
Get a daily rundown of the top stories on Urban Milwaukee 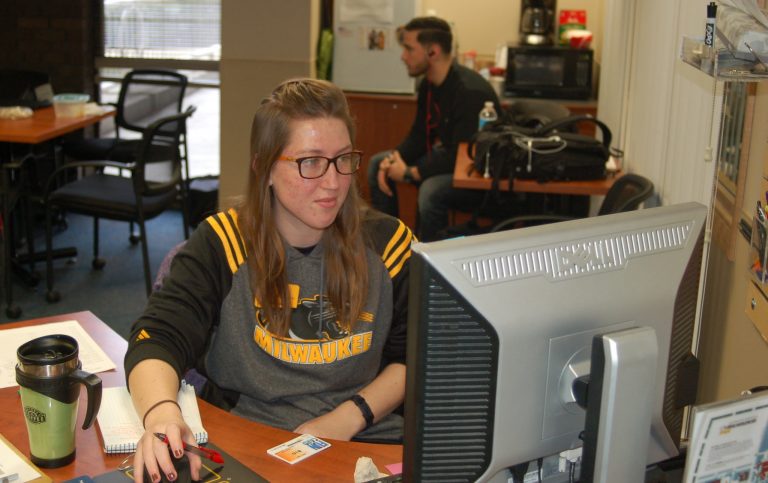 Frankie Ratka, a member of the Air National Guard, works at the Military and Veterans Resource Center reception desk in the UW-Milwaukee Student Union. Photo by Andrea Waxman.

UW-Milwaukee student Samuel Rogers served eight years in the U.S. Army, mainly working as an interrogator. During that time, he took 15 months of courses in Army schools, including a six-month intensive course in human intelligence collection. Despite submitting a Joint Services Transcript (JST) that recommended Rogers receive more than 50 credits, UW-Milwaukee has only awarded him five.

When he first applied, UW-Milwaukee encouraged Rogers to submit his military records and military academic transcripts for college credits, he said.

“That was exciting for me because I have numerous credits recommended,” he added, including 36 credits for courses that he found equivalents for at UW-Milwaukee. “They said they had not seen a transcript with as many credits as I have … (but) I don’t have anything to show for it,” Rogers said. 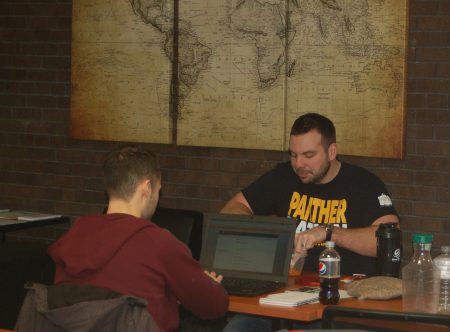 UW-Milwaukee’s Military and Veterans Resource Center gives students a central location for getting relevant information, as well as a place to study and socialize with others who share their experience. Photo by Andrea Waxman.

In an effort to address the gap between veterans’ expectations and University of Wisconsin credit-granting practices, representatives from throughout the university system recently formed a workgroup, which met for the first time on Jan. 12.

“One of our aims is to facilitate the review of military training for credits at our institutions,” said Diane Treis Rusk, director of undergraduate education for the UW System Administration and the workgroup chair.

Treis Rusk described the workgroup as “an initiative that is working with campuses that are interested in improving the articulation of credit for prior learning.” She said it is part of a larger effort not only for veterans, but for all non-traditional students. The 17 workgroup members represent UW campuses including UW-Milwaukee, technical colleges from around the state, as well as a federal program that serves veterans.

“Most institutions are now recognizing the importance of veterans’ experiences and giving (them) more weight than what they have in the past. But how much weight, credit-wise, that’s up in the air right now,” said workgroup member Charles Allen, who represents Veterans Upward Bound, a program of the U.S. Department of Education that helps veterans prepare for, gain admission to and succeed at post-secondary institutions. Allen works from an office on the UW-Milwaukee campus.

Other UW-Milwaukee students and college students around the U.S. who have served and been trained in the military also complain that they receive little academic credit from colleges and universities. Most are adults with family responsibilities, and they need to complete their studies as quickly and efficiently as possible.

Kyle Carlson, a five-year Army veteran, attended Minnesota State University Moorhead and UW-Waukesha before transferring to UW-Milwaukee. Each school evaluated his military transcript differently, awarding him 18, three and eight credits respectively. A 27-year-old geology major focused on water science, Carlson was disappointed with these results. “(UW-Milwaukee) is not very veteran–friendly in terms of accepting credits,” he said.

UW-Milwaukee gave her six credits for first aid, marksmanship and physical fitness even though she never took marksmanship and her military transcript recommended 49 credits, Hohenwalter said. Noting that the 49 credits would be enough for an associate degree, she added that UW-Milwaukee “doesn’t take any credits that were job-specific.”

“Public speaking was my job and I had a 15-week course in the Army in which we had to do seven or eight presentations,” Hohenwalter said. In the public speaking class she had to take at UW-Milwaukee because her military course was not accepted for credit, she did about half as many presentations.

Hohenwalter said her reserve unit administrator recently told her that it’s almost impossible to get credit for intelligence training and experience because of the classified nature of the work. “It’s frustrating for a lot of vets,” Hohenwalter said.

Rogers was told that if he wanted to get more credits he would have to submit course curricula from the individual schools he attended in the service. “None of them would give you (the curricula) even if you were active duty military because most of the material is sensitive, if not outright classified,” he said, adding that this is the reason the Joint Services Transcript was created.

With an enrollment of 26,000 students, 1,400 of whom are veterans, UW-Milwaukee has the most student veterans among UW system institutions, according to Phyllis King, UW-Milwaukee vice provost.

Every institution in the UW system makes its own decisions about awarding credits to veterans, King said. She noted that the decisions are complicated because it’s difficult to translate recommendations from the Joint Services Transcript into courses needed for specific degrees.

King stated that as of September 2014, UW-Milwaukee “will automatically give (student veterans) 12 credits if they have a JST.”

However, since fall 2013, 1,189 UW-Milwaukee students have been awarded 5,758 military training credits, for an average of just under five credits per student, said Registrar Seth Zlotocha.

While Rogers is unhappy with the credits he has received for his military classes and experience, he has high praise for other support services available to student veterans at UW-Milwaukee.

He cited the number of academic counselors and support staff, the Military and Veterans Resource Center, Veterans Week events, a Veterans Affairs representative on campus and a Military Education Benefits office “that doesn’t really exist at any other college that I’ve heard of.”

But Rogers said he cannot recommend UW-Milwaukee to his veteran friends because of the difficulty getting credit. Nor will he pursue post-graduate education there “because of this issue with credit for military training,” he said. “And (UW-Milwaukee is) hurting itself as much as it’s hurting these (veterans).” The university is missing out on graduates and on post-graduates, he added.

Noting that the federal government spends a lot of money creating Joint Services Transcripts, Rogers said, “The problem is that UWM advertises themselves nationally as this super pro-veteran school, so to veterans that means you accept my training transcripts. Aside from the GI Bill, that’s really all we walk away (from the military) with.”

2 thoughts on “Veterans Struggle At UW-Milwaukee”