Meinecke Paid For Street Named After Him 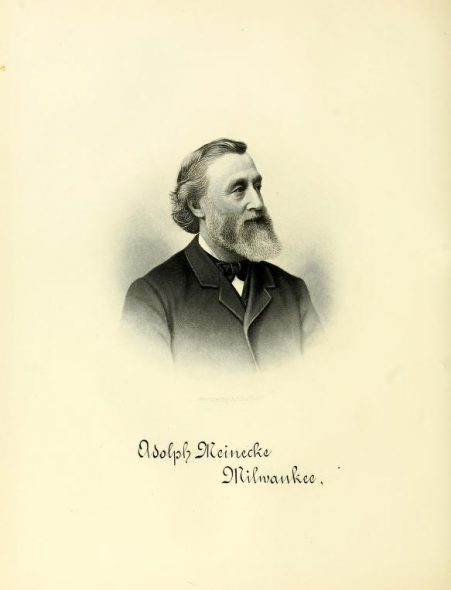 Adolph Meinecke. Photo is in the Public Domain.

Adolph Meinecke was the owner of the Milwaukee Willow Works, which produced wicker baskets, wicker furniture, and other willow ware. His products were made from willow grown at his farm bordered by W. North Avenue, W. Wright, N. 15th and N. 20th streets.

When he decided to subdivide his willow fields for housing in 1887, he named the east/west street that bisected the new subdivision Meinecke Avenue. To the east, the street was called Lee Street and Meinecke was willing to let that remain, but he wanted the street to be known as Meinecke Avenue from N. 15th Street west to the city limits. To help in assuring that this would happen, he donated three 60 by 120 foot lots on North Avenue near N. 19th Street to the city with the stipulation that if in the future his street name were changed, ownership of the lots would revert to his family. The city agreed to his conditions and soon thereafter built a fire station on the donated land.

Four decades later, during Milwaukee’s street renaming project to make it easier to navigate the city, only one name for a street was allowed. So, either Meinecke Avenue or Lee Street would have to go. Since Lee was easier to spell and pronounce than Meinecke, the decision was easy; name it Lee Street from one end to the other.

Meinecke had been dead for more than 20 years by that time and current city officials were unaware of the stipulation on the land he donated. But at least one person did remember and soon notified the Meinecke family. Ferdinand Meinecke, Adolph’s grandson, pressed the issue. The fire station and lots were now worth more than $100,000. Not willing to cede the station and lots to the family, the city reconsidered and decided to call the street Meinecke Avenue from its beginning near the Milwaukee River to N. 60th Street where it enters Wauwatosa. The street is mostly residential and it runs nearly to the Waukesha County line. 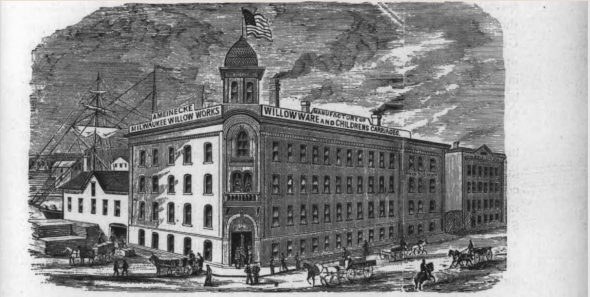 Meinecke building at Front and Mason. Photo is in the Public Domain.

Adolph Meinecke was born in Germany in 1830 and emigrated when he was 17 years old. He landed in New York where he lived for seven years before coming to Milwaukee. Here he ran an import business dealing in toys and other items. It became very difficult to import products from Europe during the Civil War so he began manufacturing toys and wicker products at his factory at Mason and Front Streets. His complex eventually covered the entire block from Mason Street to Wells Street and from Front Street to the Milwaukee River. It also included a store between Front and Water Streets.

The site was ideal for his business. He resumed importing after the war and the foreign products could be unloaded at his docks on the river, and there his manufactured items could be loaded for shipment elsewhere. Among the imported items were bird cages, fishing tackle, and masks. His factory employed 350 people who made willow products as well as children’s toys.

Adolph Meinecke and his wife, Mary Louise, had eight children, several of whom worked in the family business. The family mansion, which stood at the corner of Milwaukee and State Streets, was just a four-block walk from the factory. Meinecke died in 1905 and is buried in Forest Home Cemetery.

One of the early factory buildings in the complex was torn down to make way for a new building in 1923. During the demolition, workers found an unusual time capsule lodged in one of the walls. When they opened the canister, they all jumped back in surprise. It was a jack-in-the-box capsule and all the items in it popped out. They included a picture of Meinecke and his new factory, and several lists. One list was of the expenses of building the factory, another showed the names of all the employees who worked there, and a third was a price list of the toys they made.

Among the current occupants of the former Meinecke complex are the Safe House, The Newsroom Pub, and the City Hall Square apartments. The words on the facade of the apartment building on E. Wells Street identify it as built by “A. Meinecke.” The Bronze Fonz, a statue of a character from the old “Happy Days” television show, and a popular tourist attraction, now stands on Riverwalk Way which replaced Meinecke’s docks. 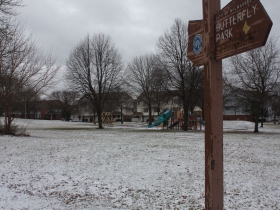 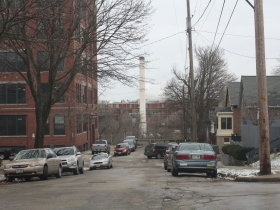 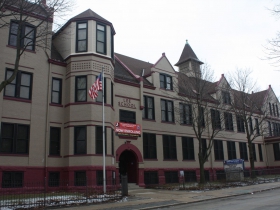 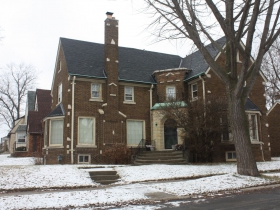 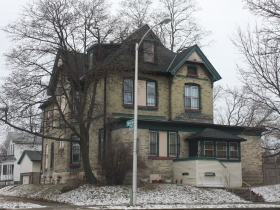 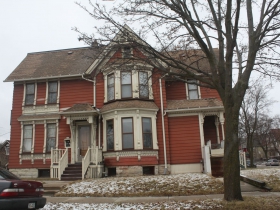 8 thoughts on “City Streets: Meinecke Paid For Street Named After Him”