Dinner at the Homesick Restaurant 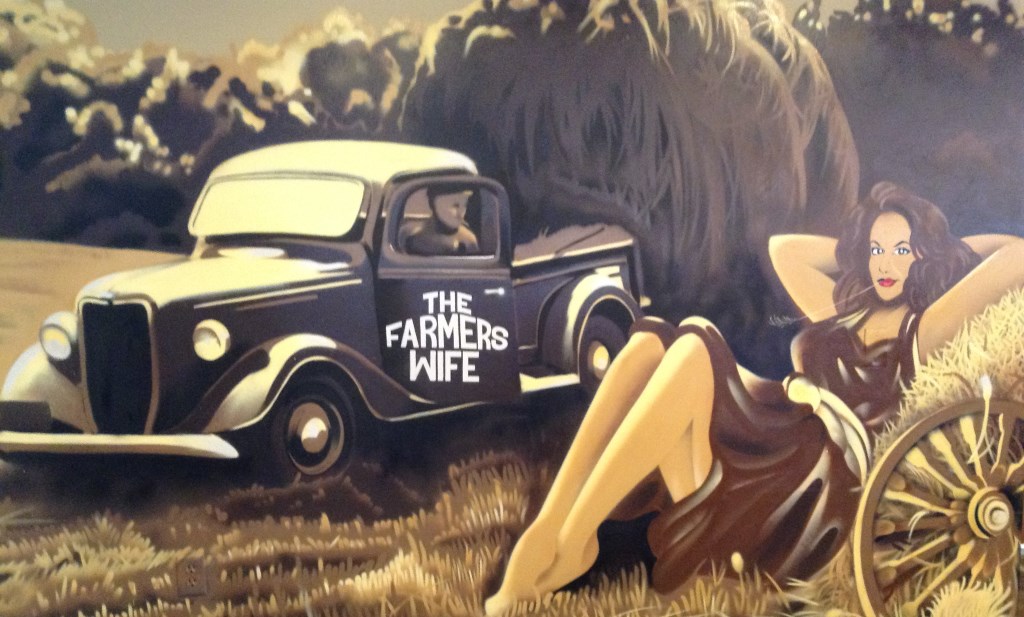 If The Farmer’s Wife, the building, looks more like a corner bar in West Allis than a restaurant, that’s because it was a corner bar until recently. It sat empty for four years until current owner Robin Mastera decided to give herself a really big fiftieth birthday present, a restaurant. She had formerly owned a tavern on the South Side, the Robin’s Nest, where she says, “People came to drink, but many also came for my food.”

She had a dream to own a restaurant in West Allis where she’s lived for 33 years. At age fifty she thought, maybe it’s time. She chose West Allis because she says, “It’s home. I raised my kids here.”

After Mastera and her husband took ownership of the building, they dug in, did a lot of the work themselves, and transformed an ordinary bar into a welcoming and spacious dining room/bar. 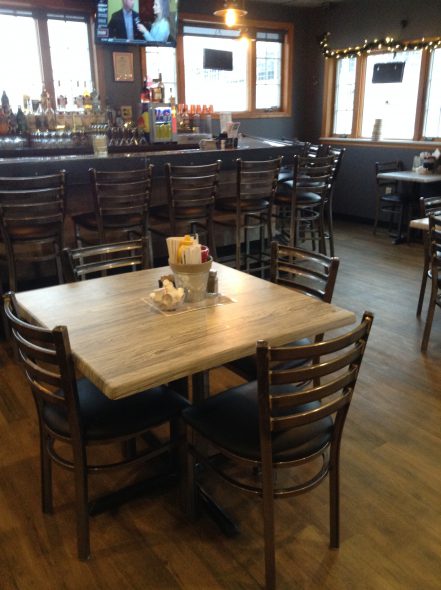 A wall-size mural — it’s huge — is the first thing we see coming in the entrance from Mitchell Street. A sexy babe reclines next to an ancient pickup truck and a hay stack. This is not random wall art, but, a scene taken directly from a photo hanging behind the bar. It’s grandma, her husband’s mother driving the truck, while other family members, including her husband, work in the field behind her. The photo answers the unasked question, how did you come up with the name? “My husband is from a farm so that makes me The Farmer’s Wife,” says Mastera.

What’s equally fascinating is the way this mural was created. A friend used spray paint, the kind used by graffiti artists. We’re fooled. We get up really close to see that only babe’s eyes, lips, and the hay she holds between her lips are actually painted with a brush. It’s an impressive tromp l’oeil.

Also worth a shout out is the bar itself, made of recycled paper grocery bags cut and sealed with epoxy. It’s simple, beautiful. Above the bar, two TVs play, not the usual sports stuff, but The Pioneer Woman on the Food channel. “Of course,” says Mastera, “we’re all about the food here.”

As much as possible, she sources that food locally: the meat from Kettle Range Meat Company; coffee from Anodyne; veggies from the nearby West Allis Farm Market, Growing Power and Mushroom Mike. A list of 65 different beers, including eight on tap, is local, from Wisconsin, and so is the wine, Wollersheim and Cedar Creek.

On the menu, comfort food dominates, with a few deviates such as the Stuffed Quahog from her husband’s eastern roots. For the uninitiated, and that includes me, a quahog is a clam shell stuffed with chopped pieces of clam mixed with bread crumbs and baked. You gotta like clams because there’s about as much clam meat as crumbs in the shell.

The recipes come from Mastera’s family, what they ate everyday, hence the emphasis on comfort food. Most of those dishes are available after 4:00 when dinner is ready. That menu reads like something from the 1950s: Pot Roast, Meatloaf, Pork Chops with Apple Sauce, Mac and Cheese, Oven Fried Chicken Breast, and Prime Rib, all served with a choice of Garlic Mashed Potatoes, Fries, Red Beans and Rice, Corn Bread, or a Side Salad.

At lunch, my friend asks why the Chicken Pot Pie is served only at dinner. “Glad you asked,” Mastera replies. “Thanks to popular demand, we decided to offer it at lunch as well.”

Served in a large cup, the pie, filled with tender chucks of chicken, veggies, and potatoes in a creamy sauce hides under a crisp mantle of puff pastry. “This is perfect comfort food,” my friend says. We also note this is a generous serving, making a filling meal at noon.

As with most newbie restaurants, there are hits and misses. The Vegetarian Greens, bitter, sour, and salty, in a balsamic mix, could use a lighter touch with the salt.

On the hits side, my friend orders the Three Cheeseburger so she can revel in a load of caramelized onions. She is not disappointed. A thick layer of onions steals the show, almost overwhelming the perfectly grilled medium-rare, three-cheese-smothered burger.

We are less enchanted with the Black Bean Burger. Lemon Tarragon aioli sounds like an ideal upgrade to a bean burger, unfortunately, it’s lost somewhere in between the lettuce and the tomato that garnish the dry burger. It self-destructs when I try to eat it, making a mess on the table. Note to self: If a restaurant serves primarily comfort food from the fifties, a bean burger is an outlier. But the side of chips, perfectly seasoned, could be addictive.

The two desserts we sample, Bread Pudding and Banana Pudding, both a reason to return, take us straight back to childhood homes when moms made dessert every night. We share the Banana Pudding, layers of bananas, creamy custard, and whipped cream, an aesthetic arrangement that overflows a Mason jar. It tastes as good as it looks.

We decide we could make a meal of the Bread Pudding, a large square of surprisingly light pudding that arrives straight from the oven. The accompanying sauce hints of whisky. We savor both with tiny bites; we don’t want to finish these ambrosial desserts.

As we leave, we complement Mastera on her birthday gift to herself and wish her well with the restaurant. When we say we’re out of words to describe our desserts she says, “Good. I’m very particular about what I serve.” 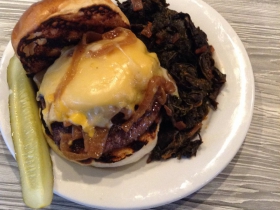 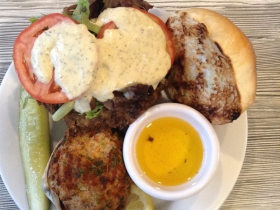 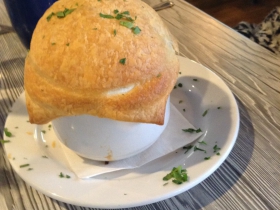 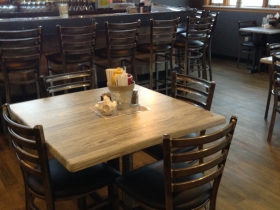 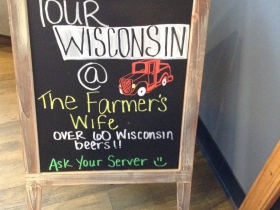 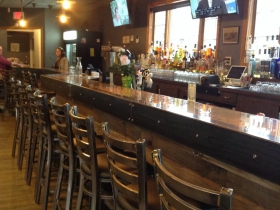 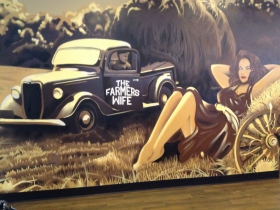 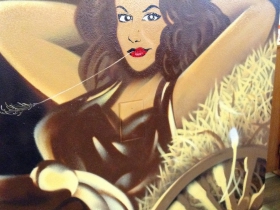 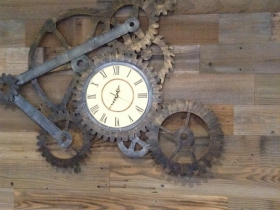 2 thoughts on “Dining: Dinner at the Homesick Restaurant”