The Return of Hamburger Mary’s

Foodies will recall the demise of La Perla and the news that Hamburger Mary’s, the popular Bay View burger joint, would relocate to the Walker’s Point location. Well, it has now reopened at 730 S. 5th St. and celebrated the event last Sunday.  Michail Takach of OnMilwaukee adds more:

Previously located in Bay View, Hamburger Mary’s came to Milwaukee in October 2011 after five blockbuster years in Chicago’s Andersonville neighborhood. Over the years, Mary’s has become a drag destination in Milwaukee, as well as a LGBTQ community landmark. The new location… offers a fresh experience with greatly expanded bar and lanai spaces, a private rooftop patio and the brand new beercade.

Moxie, a new restaurant in Whitefish Bay, opened at 501 E. Silver Spring Dr. last Thursday. The new restaurant can seat about 40 people between the full bar and booth tables. Owners Tamela Greene and Anne Marie Arroyo have cozied up the space with artwork from their European travels and their wedding day in Massachusetts. The restaurant will be open Tuesday through Thursday from 11 a.m. to 10 p.m., Friday and Saturday from 11 a.m. to midnight, and Sunday from 10 a.m. to 4 p.m. Lori Fredrich of OnMilwaukee details the menu:

Moxie features a full bar which serves numerous classic cocktails including “The Moxie,” a take on the whiskey sour. A wine list featuring both domestic and international selections is priced at $21 to $72 for bottles and $7 to $12 for glass pours. In terms of beer, bottled varieties are available along with two taps from Third Space Brewing.

Sandwiches, served with baked cracked pepper fries and a choice of soup or salad, are also available and include the Moxie Burger, featuring a seasoned house blended beef patty topped with lettuce, marinated tomato and peppercorn aioli ($12), along with a grilled portabella ($10), grilled salmon ($11) or a steak sandwich with wild mushroom tapenade and peppercorn aioli ($14).

Award-Winning chef Justin Aprahamian announced he’s broken ties with Like Minds Brewing Company, which runs a  brewery/taproom at 823 E. Hamilton St. Aprahamian, the chef/co-owner of Sanford Restaurant and a James Beard Award winner, has decided to sever his business relationship with Like Minds, which he founded with “Best of the Beer Dinners” creator John Lavelle. Ann Christenson, who reported the story for Milwaukee Magazine, says Aprahamian cited timing and the demands of a growing family for his decision. She adds this:

It’s a sad development especially considering the lengths to which the partners had to go to open their main production brewery. Because of a Wisconsin law prohibiting anyone who owns a restaurant (or tavern or retail liquor business) from also holding a brewery permit, the partners were forced them to look out-of-state for a place to brew their beers. They ended up finding a spot in Chicago. However, last year they found a way to bring Like Minds to Wisconsin after all.

The Chicago/Milwaukee restaurant and brewing operations will continue under Lavelle. (Like Minds has been building a reputation for specializing in sour beers.) 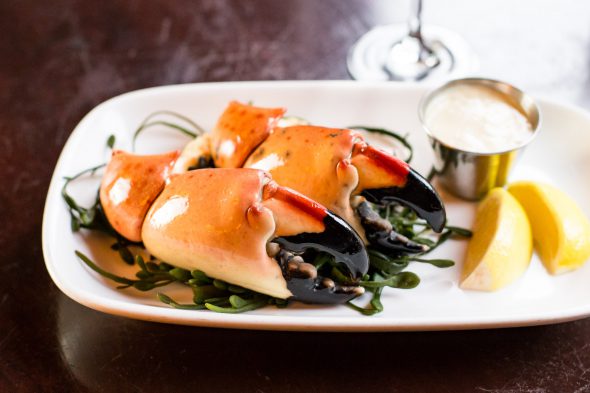 If you live in Florida, you’re likely to find many restaurants serving fresh Stone Crab. But in Milwaukee, not so much.

One of the rare restaurants that now does is Mason Street Grill, which has just announced that they are back and available to order from now until February. Guests can select from large or jumbo crab claws in sets of two, four, six or eight. Prices range from $27.95 for a pair of large claws up to $132.95 for eight jumbo claws. They are typically served with served with a tangy Miami Beach Mustard Sauce.

Bruegger’s, the bagel bakery that has operated in downtown Milwaukee for nearly 10 years, has closed. The restaurant was located at 753 N. Water St., and after a sign on the door notified customers of possible changes in hours last week, the bagel shop has now officially closed. Reporter Sean Ryan of the Milwaukee Business Journal adds:

That first-floor space is back on the market for lease, and is drawing interest from other restaurant operators, said Kevin Schmoldt, senior vice president of NAI MLG Commercial who is marketing the space. None have yet committed to leasing the space, he said.

“We are in discussion with several other brands that would be interested in taking the space,” he said.

2 thoughts on “Now Serving: The Return of Hamburger Mary’s”