By Gretchen Schuldt, Wisconsin Justice Initiative - Dec 13th, 2016 03:53 pm
Get a daily rundown of the top stories on Urban Milwaukee

About 25% of youth and adults in the 53206 zip code owed Municipal Court fines as the end of May, according to a Wisconsin Justice Initiative analysis of Municipal Court statistics.

Defendants in the 53206 zip code, the highest-poverty zip code in the city, also were the most likely to be cited, racking up 41,900 tickets from 2011 through 2014, according to another set of Municipal Court figures. Yet just 723 defendants in the zip code were offered and accepted alternative sentences, though Municipal Court judges are supposed to offer them to indigent defendants. WJI has reported here and here that Milwaukee Municipal Court judges do not routinely inform defendants of their rights to alternative sentences, as they are required by law to do.

The 53206 figures are “pretty shocking and deserve much more research,” said Ald. Michael Murphy, chairman of the Common Council’s Judiciary and Legislation Committee.

Aldermen Milele A. Coggs and Russell W. Stamper II, who represent the 53206 area, did not respond to a request for comment.

The Common Council voted last month to spend $45,000 to contract with an attorney to represent indigent defendants in Municipal Court and to supervise third-year law students who will do the same.

WJI’s zip code analysis assumes that outstanding Milwaukee Municipal Court fines are owed by people who are at least 15 years old. The analysis is based on census figures statistics provided by Municipal Court to the city’s Outstanding Debt Work Group. 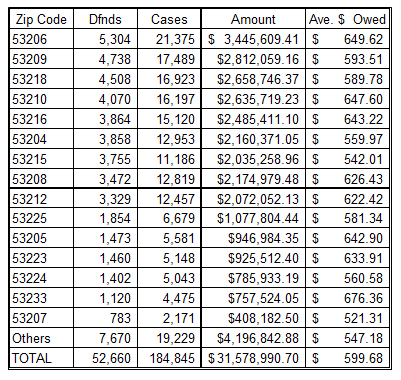 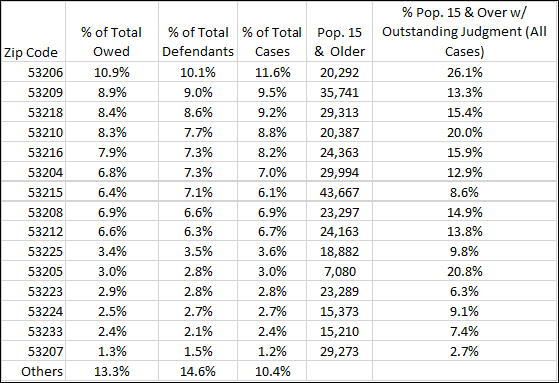 Murphy, the alderman, declined to speculate on the disparities, but said he would investigate.