With 20-20 hindsight, there is a growing consensus that Democrat Hillary Clinton’s campaign would have been well-advised to concentrate less on Donald Trump’s character issues and more on proposals to help people’s lives. In recent years, large urban areas have enjoyed the greatest job growth, while small cities and rural areas suffered declines. The Trump-Clinton voting followed this pattern; compared to the 2012 election, Trump did worse than Mitt Romney in 2012 in the large cities, and better in the small cities and countryside.

This pattern is repeated at the state level, as shown in the next graph. As a state’s median household income went up (the horizontal axis), Trump’s margin went down (the vertical axis). 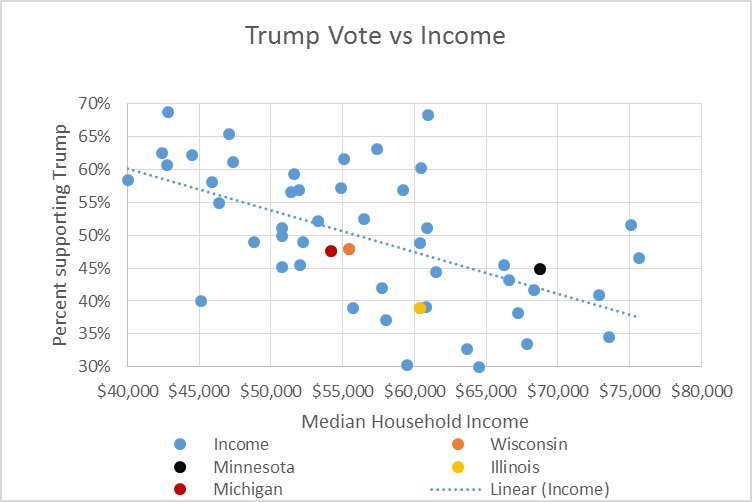 Statistically, the relationship is very strong. The correlation is -.56. The statistical significance is well over 99 percent. About one-third of the percentage of voters who chose Trump is “explained” by the variation in median household income.

Still, converting correlation to causality is a risky business. There is substantial scatter with many states defying the negative correlation between Trump’s margin and income. To some extent the negative outliers can be explained by a state’s unique characteristics. For instance, the state in the lower left hand corner (income about $40,000 and yet the Trump share is only 40 percent) is New Mexico, with a heavily Hispanic population.

Comparing Wisconsin with its most similar neighbors shows the strengths and the weaknesses of the correlation. Both Wisconsin and Michigan, with similar median incomes, handed Trump a narrow plurality. This pattern holds with the third state, Illinois. Its median income is substantially higher than Michigan and Wisconsin, and Trump lost by a substantial margin. Yet Minnesota has a still higher median income and Trump did much better there than in Illinois.

One challenge to making the jump from correlation to causality is ruling out other factors that may cause both income and Trump votes to vary in the same direction. Is there something in the culture of the various states that both holds down incomes and makes people receptive to an appeal of someone like Trump? I would suggest a gullibility factor.

It is no secret that Trump introduced an unprecedented number of lies in his campaign. A count of the rulings by the various fact checkers puts his number of false claims (particularly the most blatant ones) far higher than any other major public figure. Clinton, by contrast, competed with Barack Obama for the rank of least untrue claims.

Trump was also very willing to promise whatever would appeal to his audience without spelling out how he intended to fulfill the promise. From what we know of his business practices, this is consistent with how he operated. Those who signed up for Trump University, invested in his casinos, or agreed to work on his projects were likely to be stiffed.

Being willing to promise anything can be an advantage. Think back to the days before drug regulation when there was a plethora of patent medicines promising to cure every ailment. Those with the most aggressive claims had a competitive advantage.

Trump’s promise to “Make America Great Again” was an exercise in nostalgia. He would bring back the coal mining and manufacturing jobs that had gone overseas or, more likely, had been replaced by machines or, particularly in coal, had been lost to competing energy sources like natural gas. Because Trump’s claims had so little supporting detail, they were hard to prove or disprove.

I think Clinton should have done more to develop a plan for the areas losing jobs. As with the New Deal, federal, state, and local governments could hire people to address the backlog of unmet public needs, such as replacing lead water supply lines in Milwaukee or countering the environmental devastation from coal mining in eastern Kentucky. However, she would have had to acknowledge that so long as Republicans controlled Congress the chances of implementation were remote.

Does Wisconsin—and the other states voting for Trump—suffer a gullibility gap? Is it more focused on returning to a mythical past, than by finding the opportunities in a far more globalized economy?

A recent op ed in the Journal Sentinel illustrates what I am thinking of. It was a post-election attack on losing Democratic Senate candidate Russ Feingold by Dick Resch, the chief executive officer of Green Bay-based manufacturer KI. In it Resch makes a number of claims. For example:

The average Wisconsinite now earns more than $10,000 more annually than in 2005.

Resch does not give the source of this claim. As the following graph shows, the growth is under $1,000 in constant dollars, based on the yearly surveys by the US Census Bureau. To a large extent, Wisconsin incomes seem to have tracked US incomes. There is also a substantial number of peaks and valleys, likely introduced by sampling error. The estimates for the US are considerably smoother than the state’s, reflecting a much larger sample size. 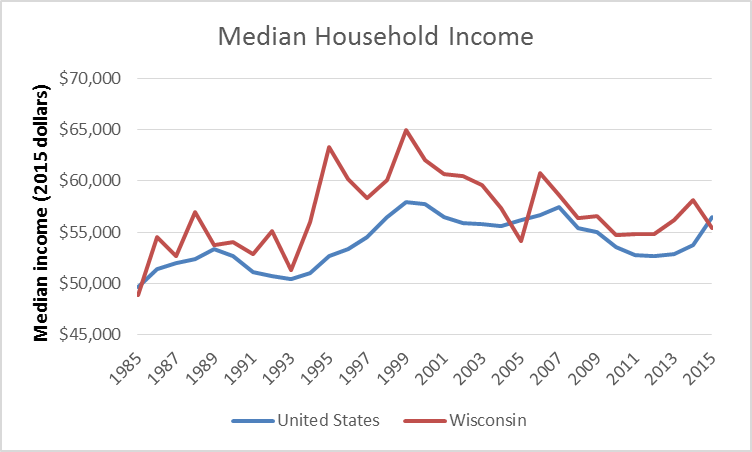 Resch apparently did not adjust for inflation. Here is a chart showing the median Wisconsin incomes in both 2015 dollars and in current dollars. Ignoring inflation, and using 2005 as starting year (long before Republican Scott Walker was elected) does indeed result in a $10,000 growth. However, this growth is entirely consumed by inflation. 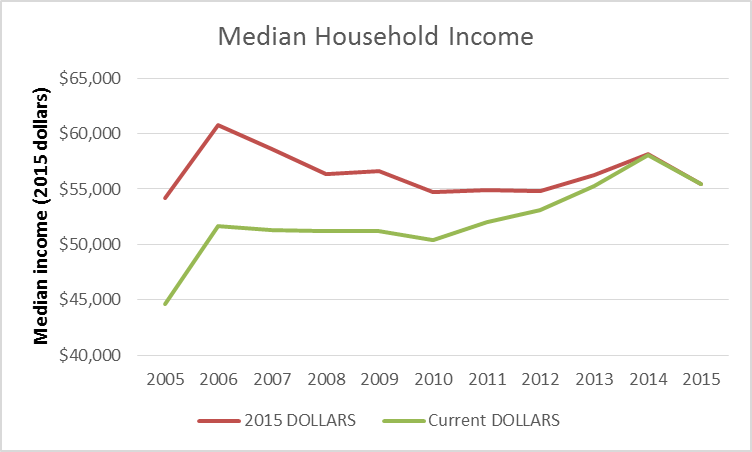 In 2011 — the year the state added the phrase “Open for Business” to its welcome signs — the state ranked 49th in the country in forecasted job growth. Since then, the state has jumped 28 spots.

Once again, Resch gives no source for his claim. There are a number of organizations that rate states based on their supposed business friendliness. An example is the rating put out by the American Legislative Exchange Council (ALEC). As the chart below shows, in ALEC’s view Wisconsin has gone from 30th to 9th place in its policies (“Outlook”) since 2011 but has barely budged in its economic performance. 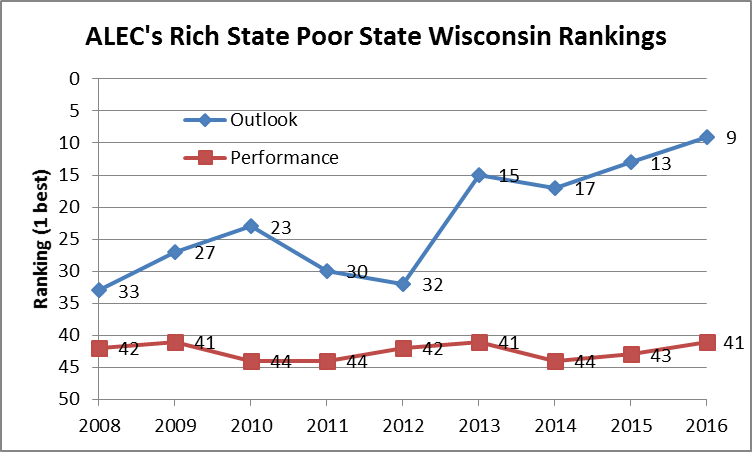 It’s no wonder Wisconsin’s unemployment rate is at 4.1% — well below the national average of 5%.

The Wisconsin unemployment rate has been under the national rate consistently for many years, before the Great Recession, at the recession’s height, and most recently—both before and after Wisconsin was declared “Open for Business.” There seem to be structural reasons for differences in unemployment between states. 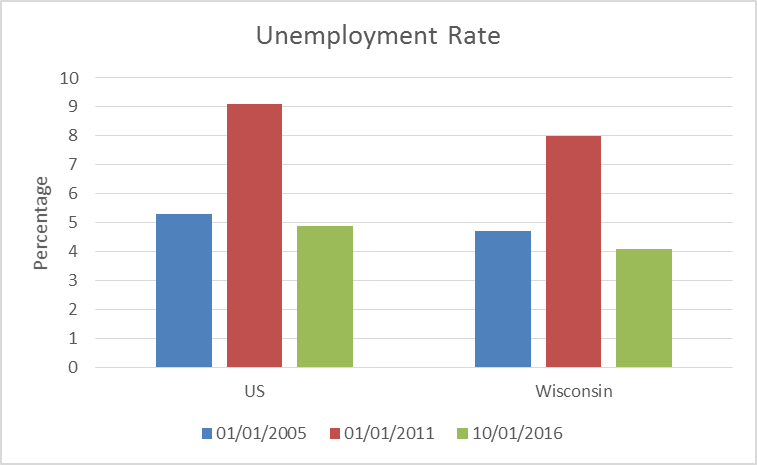 The Journal Sentinel does not do its readers any favors when it devotes its increasingly skimpy pages to claims that are untrue or misleading. Even it does not have the resources to turn the full force of PolitiFact on claims made in op eds, perhaps it should insist the authors supply links to the sources they used.

It is certainly a service to readers to offer them a variety of viewpoints. However, that does not entitled op ed writers to invent their own facts, whatever Trump’s success in doing so.

My guess is that Resch did not set out to mislead his readers. More likely his article reflects the effects of confirmation bias—the human tendency to accept “facts” uncritically if they support one’s belief system. He probably repeated claims made by his business colleagues and the organizations he belongs to, such as the Wisconsin Manufacturers and Commerce.

The same pattern operates in other op eds. This week, the Journal Sentinel published another column that started out saying:

Wisconsin has become a case study in what happens when lawmakers shrink the size of government and return power to the people. During the past five years, nearly 200,000 new jobs have been created and unemployment has dropped from 8.1% to 4.1%.

Presumably the authors, affiliated with two conservative organizations, Americans for Prosperity and the Wisconsin Institute for Law & Liberty, chose 5 years because that takes us back to 2011, the year Walker became governor. What they neglect to point out is that Wisconsin has underperformed the nation in job growth during this period. If it had grown at the same rate as the average state, Wisconsin would have added another 100,000 jobs.

Besides misleading readers, these claims make it harder to improve the state’s economy. If Wisconsin’s economic performance has been sub-par under both Democratic and Republican leadership — and it clearly has — perhaps the cause is less its politics but a business culture unwilling to question its underlying assumptions.