Located near the airport, it’s a tasty antidote to all the fast food joints. 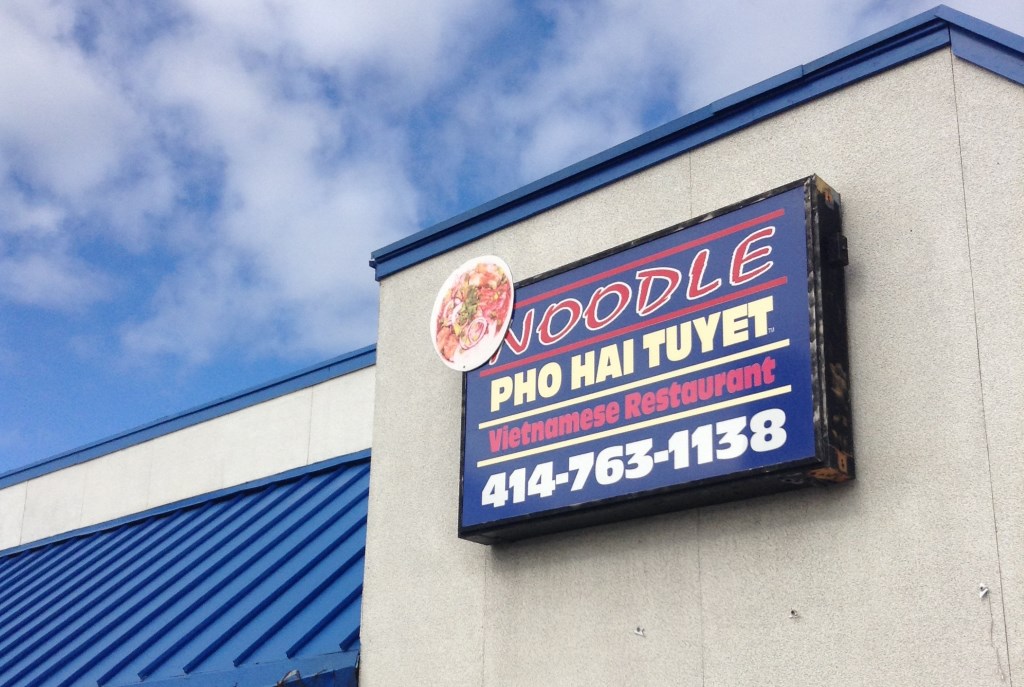 Until I ate twice at Pho Hai Tuyet, my familiarity with Vietnamese cuisine was mostly limited to pho, spring rolls, and banh mi. Vietnamese food is so much more. At this authentic gem, surrounded by fast food joints — Burger King, KFC, Dunkin Donuts, McDonalds — I find “fresh” is the best word I can come up with to describe the dishes my friends and I sampled at Pho Hai Tuyet.

On my first visit, we share something familiar on the Khai Vi or Appetizer menu: Goi Cuon, three spring rolls. Inside each translucent rice paper roll we find a salad, shredded lettuce and carrots, bits of cilantro, some rice, and three fat succulent shrimp. The rolls come with a small dish of peanut dipping sauce, sauce so delicious I want to spoon it instead of politely dipping as intended. I add Sriracha to ramp up the flavor and because I like spicy.

Already, with the appetizer, we have experienced the essence of Vietnamese cuisine and its yin/yang of contrasting flavors and textures: crunchy salad; juicy shrimp; sweet/salty peanut sauce; the balance that makes every bite a surprise.

We sit in a small sunroom with five tables facing Layton. It’s well soundproofed. Semis rumble past but we hear nothing as the sun warms us on a chilly November day. On the wall, a photo of Marilyn Monroe in a typically provocative pose gazes at us, while inside the large main dining room, a jovial buddha-like figure with an impressive belly makes us smile. 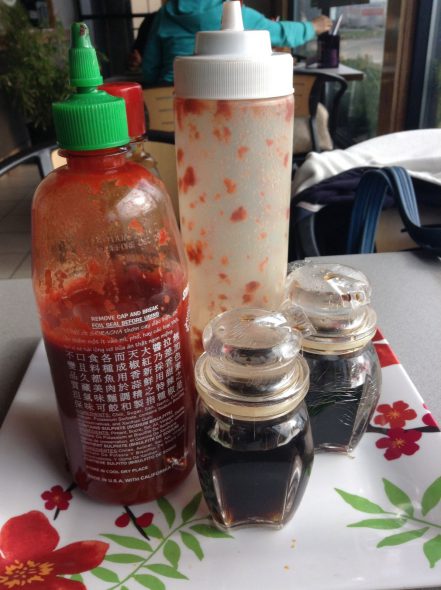 A tray on the table holds five sauces: Sriracha; Hoisin; fish sauce; soy sauce; and an unlabeled hot sauce in a plastic squeeze container that could be dangerous.

I stay with the familiar and order Pho, the classic noodle soup that’s considered the national dish of Viet Nam, usually eaten in the morning to awaken the senses. I choose number five from a list of twenty-five, Mi Xa Xiu or egg noodle with BBQ pork. I bypass everything that includes tendon and tripe. Tendon sounds like a tough rubber band, while tripe is not a favorite from my travels in Mexico.

The pho comes in a large bowl accompanied by a plate holding jalapeno rings, lime wedges, sprouts, and a sprig of mint. Thin-sliced pork and chopped green onion floats on top of broth that hides a large mass of egg noodles. I add the accouterments to brighten the flavors and textures making it sweet, sour, crunchy, salty, and from the jalapeno rings, some serious heat. People who don’t like spicy will appreciate the pho that comes with little or no heat. That’s what the add-ons are for.

The pho comes in two sizes, regular, the one I order, and large, a bowl, about the size of my bathroom sink, enough to feed a family of four. I eat half the regular and enjoy the rest the next day.

My companion orders Mi Xao Gion Do Bien, or pan-fried crispy egg noodles with seafood. An unexpected collage of vegetables rests on a bed of crisp noodles. Ten shrimp, perfectly cooked, mingle with baby corn, carrot, broccoli, bok choy, and cilantro. “It’s so healthy,” my friend exclaims as she eyes the pile of veggies. She digs in and says, “The noodles are crunchy but not fall apart crunchy, almost but not quite chewy.”

Our server notes our struggle with the chopsticks and brings two forks. On my second visit, she recognizes me, brings forks to the table when she serves the meal, and removes the chopsticks.

On my second visit I order from the Bun Mi menu, a dish called Bun Tom Nuong, or Charbroiled shrimp with rice vermicelli and vegetables. No dish in this cuisine is complete without vegetables and this shrimp and rice combo is no exception. There are shredded carrots, lettuce, and sprouts alongside nine perfectly charred shrimp and the vermicelli, unfortunately served cold. That’s when I learn the difference between the skinny egg noodles in pho and rice vermicelli noodles in Bun Tom. Egg noodles cooperate, and wrap nicely around a fork, while the annoying rice noodles stretch, wriggle, and bend. My friend observes my struggle to either slurp or bite through the noodles and says, “I think you could use a pair of scissors.”

The dish comes with fish sauce on the side. I dump all of it on the cold noodles, then, add soy sauce to cover the slightly fishy taste. I decide fishy must be an acquired taste.

We share my friend’s Com Tom Xao Ot or shrimp sautéed with lemongrass and pepper with steamed rice. Turns out it has unadvertised heat from abundant cracked pepper. The dominant flavor however, lemongrass, has been chopped into tiny bits and coats everything, the shrimp and the red and green peppers. Unlike lemongrass in familiar Thai dishes, this is not a subtle flavor add on. It gives the dish a bright lemony and yes, fresh taste. Add the char on the shrimp, the heat from the pepper, the rice to cool the palate, the sprinkle of cilantro, and we have a plateful that engages our senses and leaves us wanting more.

From the sunroom we observe a steady stream of people coming to the dining room to collect carry-out orders. Makes sense. Bun Tom Nuong, for example, is a healthful choice compared to what’s offered by the neighborhood purveyors, say the Colonel’s chicken or anything from the golden arches. Pho Hai Tuyet’s proximity to the airport (Layton just off Howell) makes it an easy and fast option for travelers who need some takeout.

The next time I’m at the airport, I know what I’ll be bringing home for dinner. 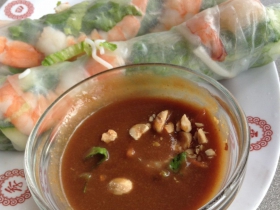 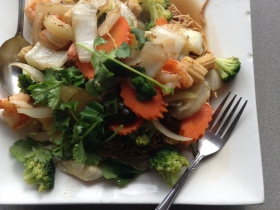 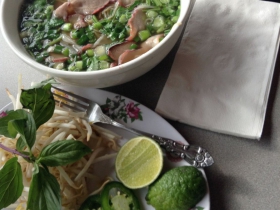 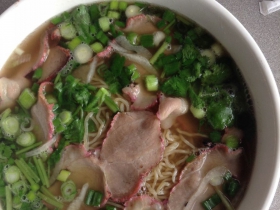 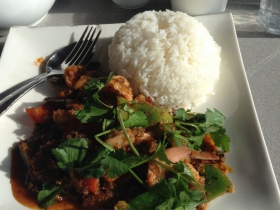 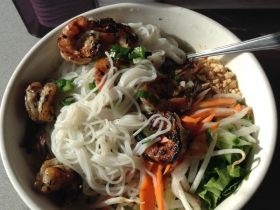 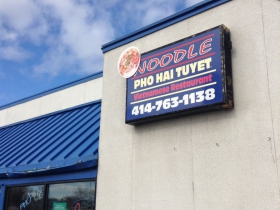 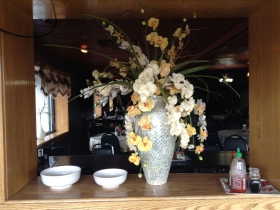 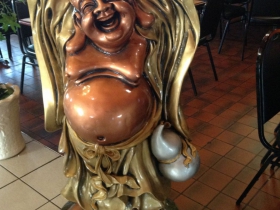