Walker Has Failed to Create Jobs

I know we live in a truth-free culture where fake “news” may have tipped the Presidential election, but I want to pass along the reality that new federal job creation estimates based on the science of sampling show failed private sector job creation during Scott Walker‘s almost six years as Wisconsin Governor.

The data at the heart of the story:

Nationally, private-sector jobs have increased by 12.2 percent since January 2011.

*  The means that the rate of job growth during Walker’s tenure is substantially higher nationally than it is in Wisconsin.

Helluva a way to position one’s self for a third term – – or to reach even higher for a US Senate seat – –  but Walker will do either funded with millions in hard-right corporate and ideological-supplied campaign money while tweeting to the world and and inveighing at by-invitation-only events about “Jim Doyle…Obamacare…drug tests for food stamps…I love Paul Ryan…ham and cheese…Go Pack!” 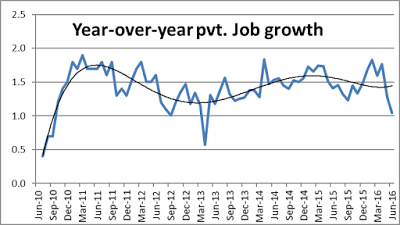 Not only is that job growth much less than originally reported, but the 1.04 percent quarter-end private sector job growth is the lowest since Walker took office in January 2011, and the lowest in any 12-month period since April 2013 (a weather-related fluke).

The 1.04 percent growth is well below the national rate of 1.92 percent in that time period, and we’ll see in three weeks how far down this puts Wisconsin when compared to rest of the U.S. and the Midwest. Given how far behind we are from the national rate, I’m thinking Wisconsin is very likely to be in at least the bottom 20 for the rate of national job growth for the 20th straight quarter during the Age of Fitzwalkerstan, and could well be bottom ten.

18 thoughts on “Op-Ed: Walker Has Failed to Create Jobs”