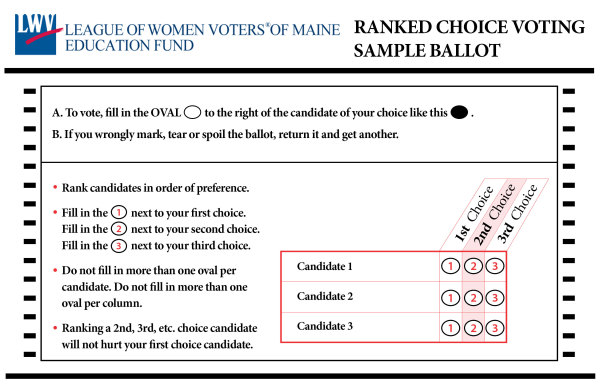 Voters here passed Prop 59, an advisory measure calling on elected officials to use their powers to help overturn Citizens United by an amendment to the U.S. Constitution, if needed, to allow full regulation of campaign spending and contributions and to proclaim that corporations do not have the same rights as persons. California became the 18th state to pass such a measure.

Voters here passed Question 5 in favor “ranked-choice voting,” also known as “instant-runoff voting.” This method allows you to rank the candidates in your order of preference. There are several rounds of voting. On the second round, the candidate with the least amount of votes is thrown out, and those who voted for that candidate as their number one get to have their vote for their number-two candidate counted next. This method proceeds until one candidate wins a majority. Maine is the first state in the Union that will use ranked-choice voting in elections for Congress, the state legislature, and the governorship.

Voters here passed Question 2, which gave the Ethics Commission the authority to investigate and prosecute legislators.

The measure also reduced the amount that individuals can give to PACs and political parties from $10,000 down to $2,000.

The measure established that anyone giving $500 or more to a campaign, PA, or political party must have his or her occupation and current employer reported.

On political ads, if there is coordination with other campaigns, the measure said such coordination must be disclosed.

It prohibited lobbyists from giving gifts to elected officials or staff that exceed $100 in any given year.

Voters here passed Initiative 735, which urges Washington’s Congressional representatives to pass an amendment to the U.S. Constitution to overturn Citizens United. That amendment would proclaim that rights listed in the Constitution are reserved for human beings, spending money is not the same as engaging in free speech, governments are empowered to regulate political contributions and expenditures to prevent corruption, and contributions and expenditures must be disclosed to the public. Washington became the 19th state to pass such a measure.