Recently, we broke the news that Judge John Siefert is pondering a challenge to David A. Clarke, Jr., the Democratic Sheriff who is widely known for his support of Donald Trump and his frequent appearances on Fox News. This was followed by a story in the Milwaukee Journal Sentinel in which Dan Bice quoted Siefert as saying he was 90 percent certain that he would challenge Clarke in 2018.

This prompted an outburst on the Milwaukee County Sheriff‘s Office Facebook page on October 13th.

Sheriff Clarke’s observations on a story Dan Bice wrote this week: Milwaukee County Circuit Court Judge John Siefert pops off at the mouth that he is going to run for sheriff in two years. Siefert, per the Law Enforcement Standards Board, will have to pass the recruit academy to be a certified law enforcement officer. Siefert, who will be nearly 70 years old by the time he would enter the recruit school, would have to meet these Physical Readiness Entrance/Exit standards to become certified:

Watching him qualify will be interesting to see.

The post was accompanied by a photograph from the Milwaukee Journal Sentinel of the portly judge, juxtaposed with a photograph of a saluting and trim Clarke.

Any reasonable observer would note that this is an apparent use of a government Facebook page for prohibited political purposes. Most office holders keep such comments to their campaign Facebook pages and websites, but not Clarke.

Clarke’s comments drew an immediate rebuke from Siefert. In a letter to Urban Milwaukee, he wrote: 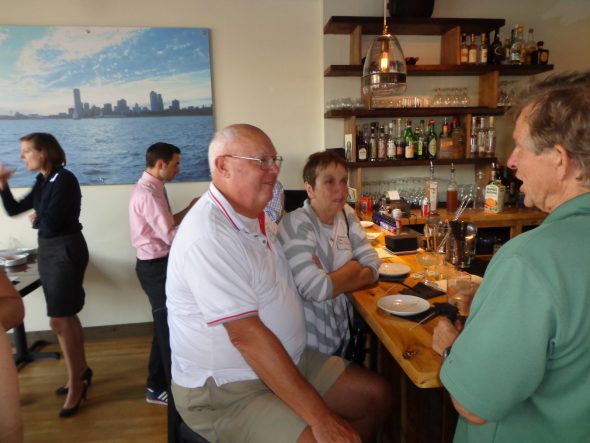 “If Sheriff Clarke could take time from leading mobs of pitchfork wielding Trump supporters and actually study the laws governing Sheriffs here in Wisconsin, he would see that sheriffs don’t have to attend a law enforcement officers’ training academy.

“But, as you can see from the attached photocopy of my diploma, I have.”

Siefert’s letter included a citation from the governing statute, which reads:

8. Sheriffs are not required to satisfy the requirements under subd. 2., 3., or 7. as a condition of tenure or continued employment.

The photocopy of the diploma issued by the State of Wisconsin Department of Justice on June 7th, 1977, shows that the Basic Certificate of the Law Enforcement Standards Board was awarded to Siefert on that date.

In a follow up telephone conversation, Siefert expressed surprise that Clarke would have been ignorant of the provisions of the law relating to the qualifications for the job of Sheriff. Siefert criticized Clarke for his frequent travels and public pronouncements and suggested he would be better off “running his department and not running around the country giving speeches.”

I suggest Clarke should lobby to have an Equestrian standard set for sheriffs based on his horsemanship. It would take Roy Rogers to beat him then!

Data from the Legislative Fiscal Bureau provided to Urban Milwaukee puts a dollars and cents number on the impact of team sports at the University of Wisconsin in Madison.

It is a two-way street, with the University investing in its players, while reaping returns from athletic revenues.

UW-Madison will provide $8.3 million in financial support for the Athletic Department in 2016-17. The majority of this support is provided in the form of tuition waivers for student athletes.

UW-Madison also funds a portion of the fuel and utilities costs associated with facilities occupied by the Athletic Department. It is estimated that these costs will total $2.8 million in 2016-17. [Total: $11.3 million.–Ed.]

On the other side of the ledger:

It is anticipated that the Athletic Department will make $12.4 million in financial contributions to UW-Madison during the 2016-17 fiscal year. This amount includes $3.6 million in charges for centralized services, $0.6 million for parking, $0.6 million in support  for the UW marching band, and $0.6 million in tickets and suite rentals.