Whatever Happened to The Gay Press?

Media outlets vanish as LGBTQ culture moves to the mainstream. 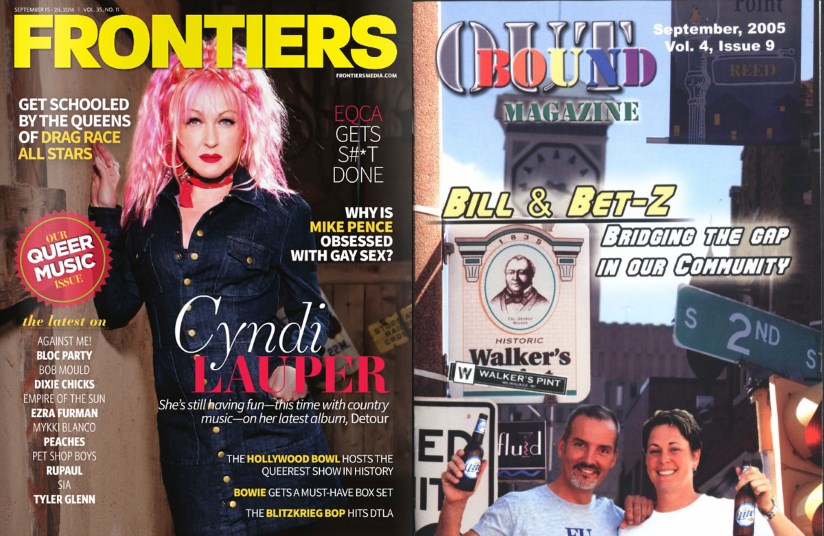 Frontiers and Out Bound.

Recently, Multimedia Platforms Worldwide terminated its 44 employees, announced the company was in “suspension,” and ceased all publications. While the courts battle over frozen assets, restraining orders and bankruptcy proceedings, over 600,000 American readers will find their local newsstands empty — forever — of the LGBTQ-oriented journalism this company produced.

Multimedia Platforms didn’t print newspapers. They produced high-quality, stylish weekly news magazines that served up social commentary, event calendars, snappy columns and city guides. Their weeklies – including NEXT in New York City, AGENDA in southern Florida, and the 35-year-running Frontiers in Los Angeles – often served as the barometer of big city cool. Before the bottom dropped out, the company was perfectly positioned to become the largest LGBTQ media producer in America. 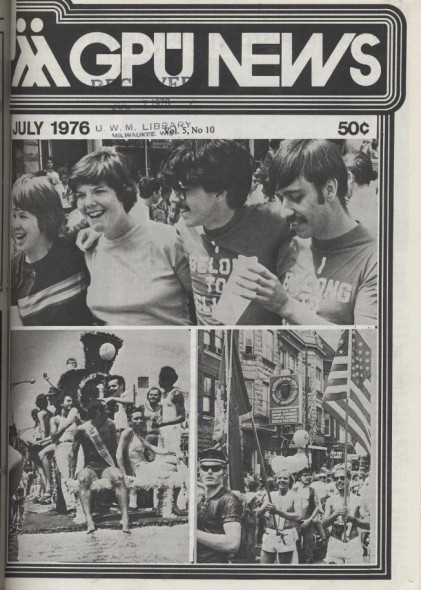 With a reach of 40 cities, 7.5 million readers and 4 million unique online visitors annually, these magazines didn’t just define nightlife.  They defined the new and now. More importantly, they provided snapshots of the end of the world as we knew it.

Per sociologist Greggor Mattson, one-third of the gay bars in the United States have disappeared since 2008. Should we be surprised that the trusted and beloved “bar rags” are now disappearing too? Multimedia’s demise dramatizes just how quickly a unique culture is becoming part of the mainstream.

How far we’ve come from Vice Versa, America’s first LGBTQ magazine, which circulated its carbon copy newsletters by hand in underground women’s bars in 1940s Los Angeles – because mailing them would have been a federal crime.

Gay and lesbian magazines might still be illegal today, if not for ONE, America’s first national gay mail-order newsletter.  On January 13, 1958, the U.S. Supreme Court ruled in favor of ONE in a U.S. Postal Service lawsuit that ultimately redefined obscenity laws. The Supreme Court had never before ruled in favor of homosexuals in American history, but now they had opened the floodgates for a national gay press. National gay guides, such as the Lavender Baedeker, began to circulate by mail order, fostering a national nightlife network for men in the know and a historical trace for today’s researchers (like me.) 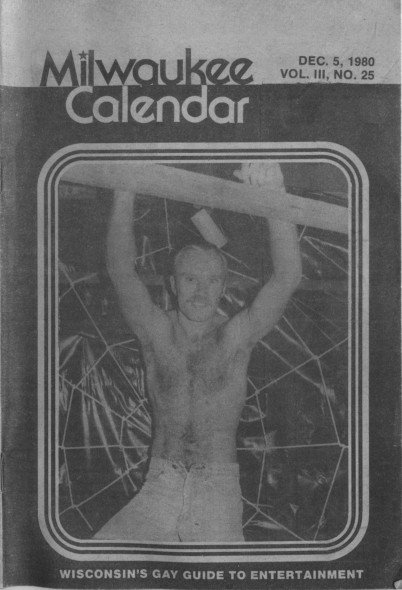 By the time ONE ceased publication in December 1969, the Stonewall Riots had inspired gay publications in almost every major American city – except Milwaukee.

Counterculture magazine Kaleidoscope began to cover the movement in February 1970, tackling topics from gay dances to vice squad raids to the intersection of faith and sexuality. The January 1971 issue of Kaleidoscope, which covered the first Gay Pride Week, was produced entirely by the Milwaukee Gay Liberation Front and Radical Queens. (DJs from 98.3 WZMF even appeared naked in that issue to protest gay persecution. Can you imagine a local station doing that now?)

In October 1971, local pioneer Eldon Murray launched GPU News, the first Milwaukee gay monthly and the voice of the Gay People’s Union organization. For the next ten years, GPU News (and its nightlife calendar, the Milwaukee Update) provided some of the city’s best gay rights coverage. In March 1972, Amazon launched as an alternative magazine by women for women. From its humble beginnings as a campus newsletter, Amazon eventually attracted a national audience and a network of famous contributors before shutting down in March 1984. The entire print history of both publications is now available online via the Wisconsin LGBT History Project. 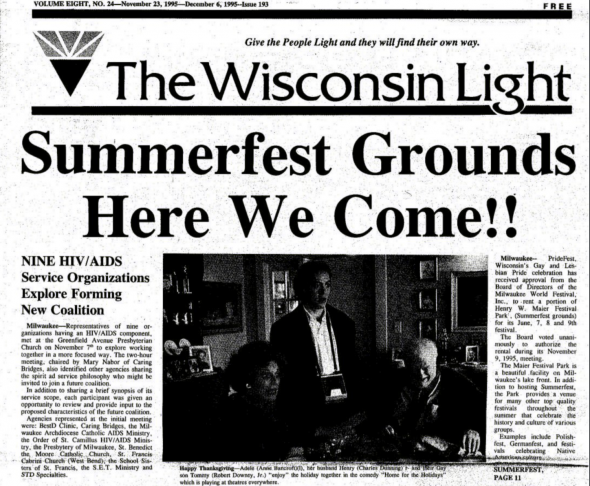 GPU News and Amazon launched a 45-year legacy of continuous “gay press” that continues to this day. When the Internet was still science fiction, Milwaukee’s LGBTQ community got their information from newsletters of varying quality, consistency and reliability. From Milwaukee Calendar in the 1970s to In Step in the 1980s, from Wisconsin Light to Q*Voice in the 1990s, from Out Bound to Queer Life News in the 2000s, Milwaukee has been fortunate to have local publishers sharing the diverse and dynamic voices of our community.

I still remember picking up my first In Step – while I was in high school — and thinking, “all of THIS is going on in Milwaukee?” It was like finding a map to a secret world, and, even in the 1980s, that world was still pretty secret. 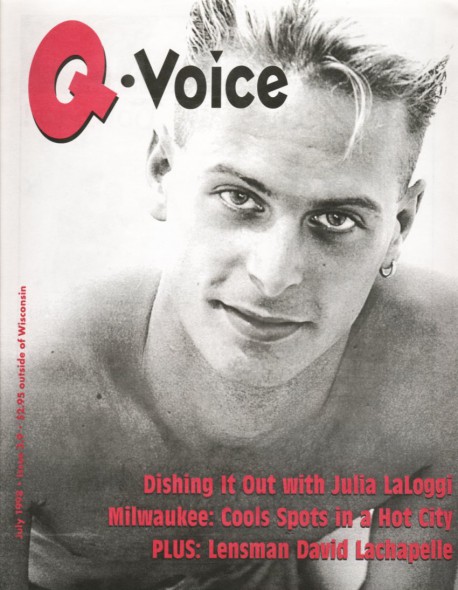 For decades, the community turned to these publications as a trusted source of truth around local news, gossip and events, especially back when the mainstream media barely recognized the existence of LGBTQ people. If you’ve been out in Milwaukee long enough, you’ve been mentioned or pictured in one of these publications. Maybe you’ve even been lucky enough to be on the cover. Columnists and captions could refer to people by their first names only – and everyone would automatically know who they were. The community was fiercely tight-knit, and it didn’t really take much to earn coverage.

But times are changing. There are now just two LGBTQ publications, QUEST and Our Lives, attempting to cover the entire state. Neither are based in Milwaukee.

Over the past 20 years, the Milwaukee Journal Sentinel has been downsized beyond recognition. The rise of zines in the 1990s, blogs in the 2000s, and social media in the 2010s transitioned local publishing power to the people. With more and more people getting their news from Facebook and Twitter, we’ve traded in the quality of journalism for the convenience of crowdsourcing.

Our local alternative press, including Wisconsin Gazette, Shepherd Express, and Riverwest Currents, currently provides supportive coverage and content. But with production costs increasing and page counts decreasing, competition for space in any print publication is fiercer than ever. Hard editorial decisions have to be made, and LGBTQ content can’t always make the cut. 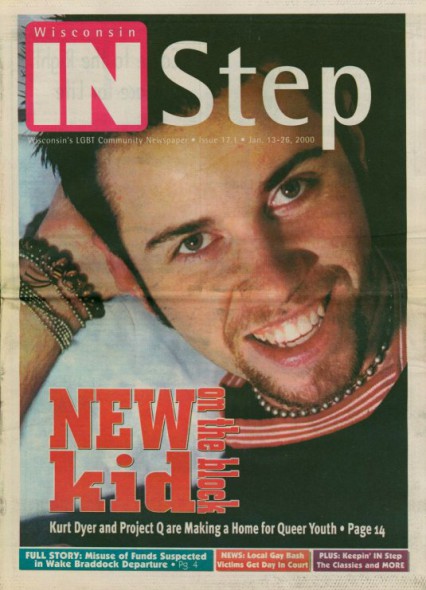 Not long ago, gays and lesbians only saw themselves reflected in the mainstream media as deviates, criminals and misfits. The gay press was grass roots because it had to be. It was born out of the type of raw rage and white-hot fire that fuels real-world activism, mobilization and change.

Nowadays, that fire seems to have cooled to room temperature. It often feels like we are living in the advent of that great social revolution, where one-third of us just doesn’t know what to be outraged about today, one-third knows but isn’t sure how to launch that fight, and one-third feels our battles are long over and all our wars have been won. 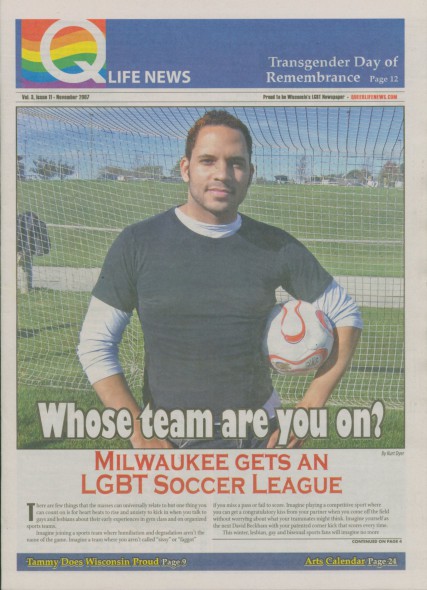 “Lisa Ben” concluded Vice Versa magazine in 1948 with a wish that “better magazines dedicated to (lesbians and gays), in some future time, might take their rightful place on the newsstands beside other publications, to be available openly and without restriction.”

For NEXT, AGENDA and Frontiers readers, this “future time” has already come and gone. Who or what will arise to fill that gap, both nationally and in Milwaukee?

I’ll be exploring questions like this in Out Look, my new weekly column for Urban Milwaukee. I won’t pretend to be the voice of LGBTQ Milwaukee; instead, I hope to use my voice to start an ongoing conversation. As an author, historian, nonprofit leader and communications professional, I may come at these issues from a number of perspectives. In the process, I hope to help others share their stories and take their rightful place in the Milwaukee community.

One thought on “Out Look: Whatever Happened to The Gay Press?”