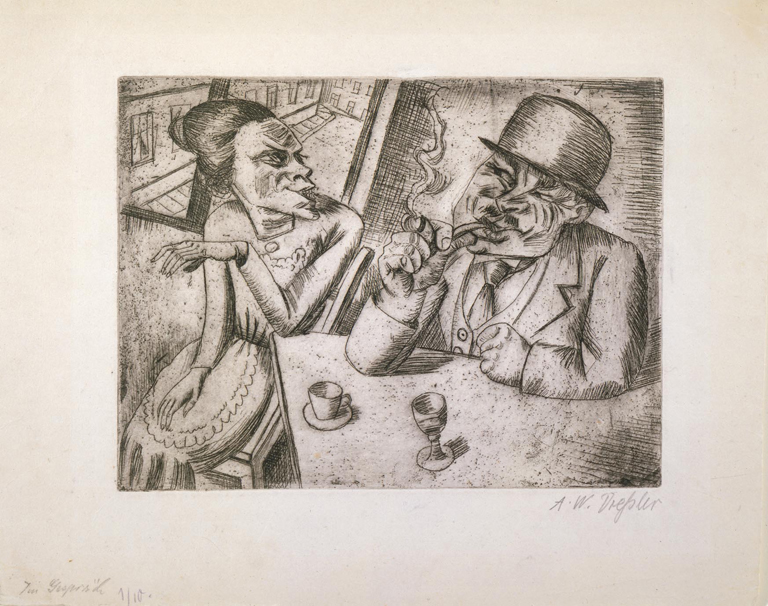 When the Milwaukee Art Museum scheduled an exhibition on the art of the silent film era, “Haunted Screens: German Cinema in the 1920s,” the music of cinema seemed a natural focus for a Present Music concert. Present Music will offer a concert entitled “Angst, Horror & Fun” at the museum this Friday evening in a collaboration that seems a natural combination of art, film, music and the Halloween season.

The Great Fear; From the deluxe periodical The Creators, vol. 1, no. 2, published 1919. Courtesy of the Milwaukee Art Museum.

The museum exhibit focuses on a narrow part of cinema history – the early German silent films inspired by German Expressionism. The rational: “In the wake of WWI, while Hollywood and the rest of Western cinema were focused mostly on adventure, romance and comedy, German filmmakers explored the anxiety and emotional turbulence that dominated life in Germany.”

The exhibition description paints a vivid picture: “The Expressionist movement introduced a highly charged emotionalism to the artistic disciplines of painting, photography, theater, literature and architecture, as well as film, in the early part of the 20th century. German filmmakers employed geometrically skewed set designs, dramatic lighting, off-kilter framing, strong shadows and distorted perspectives to express a sense of uneasiness and discomfort. These films reflected the mood of Germany during this time, when Germans were reeling from the death and destruction of WWI and were enduring hyperinflation and other hardships.”

The exhibit will include “more than 150 objects, including set design drawings, photographs, posters, documents, equipment, cameras and film clips from more than 20 films.” The Museum exhibit will run through January 22.

Music was important to cinema before sound-tracks. Most silent films were accompanied by music, often live piano or grand Wurlitzer organs. Near the end of the silent era, music was commissioned for extravagant full-length films and large theaters in major cities employed orchestras to accompany the film. The emergence of “talkies” was not without its critics. Sound-tracks were too married to the action. “Mickey-mouse” effects conveyed little of the grandeur of the symphonic scores written for the epic silent films. Of greater impact, with the end of the silent era nearly 100,000 musicians were without jobs.

Present Music has planned a comprehensive evening. For the first half of the show, three events are programmed in rotation – an introduction to the Haunted Screens exhibit by curator Margaret Andera, select solo works performed in galleries featuring German Expressionist art and a concert of three works for chamber and voice in the Museum auditorium. The entire audience will reconvene in Windhover Hall under the “wings” for a “mélange of horror-inspired music and film.” 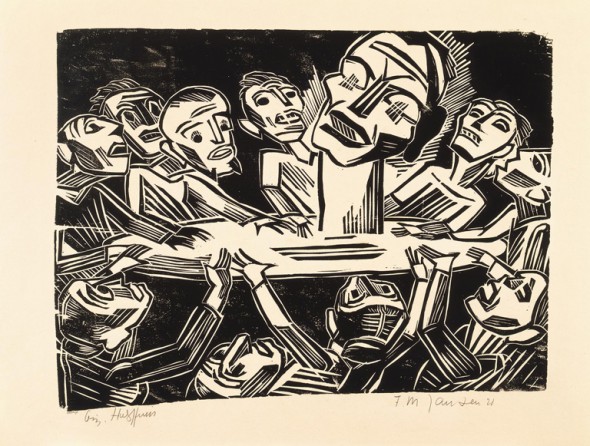 Table-Turning; Plate 14 of 27 from the portfolio The Metropolis, published 1922. Courtesy of the Milwaukee Art Museum.

The more intimate gallery selections will be played in the Specks collection gallery featuring German Expressionist prints. Present Music Executive Director Meaghan Heinrich describes the mood of post World War I Germany and its effect on art, film and music. “There was an aesthetic of angst – this feeling trapped, on the edge of something, of not being able to escape – of things being inevitable. (The result is) very unsettling music. The Specks collection (contains) very dark and disturbing art.” Gallery selections feature solo music for flute, saxophone and improvised drum set. The music will be marked by its chilly, angst-ridden nature.

The auditorium concert begins with an early string quartet by Anton Webern, Five Movements for String Quartet, Op. 5 (1909), which explores atonality in a sparse palette marked by abrupt, creative use of the strings. Critic Susan Key suggests that the work “built interconnected motives into a crystalline texture, in which each facet has a distinctive shape, separate from yet resembling the whole.” Heinrich observes, “The music may seem harsh and inaccessible. This is not ugly music, but music about feeling terrified. (That feeling was) justified.”

A reimagined piano genre, the Graceful Ghost Rag (1938) by William Bolcom and a campy cabaret song by Mischa Spoliansky – “I am a Vamp” – will lighten the mood.

The second-half concert relies upon neither the original music nor the original form of the featured silent films. Present Music violinist Eric Segnitz will reprise a performance of music he compiled to accompany a selection from F.W. Murau‘s classic movie Nosferatu (1922) for a Present Music concert several decades ago. He has written new music for an edited version of Robert Weine‘s The Cabinet of Dr. Caligari (1920). And a collage of excerpts from Fritz Lang‘s Metropolis (1927) will be accompanied by re-arranged music by Klaus Nomi, a mid-century New York cabaret countertenor whose style and otherworldly stage persona reflected the era of earlier German cabarets.

The Quasimondo Physical Theatre will also participate with Present Music. Exactly how has not been specified. Quasimondo strives to “challenge theatrical paradigms to create innovative work that is aural, kinetic, visual, and visceral.” Expect improvised mime around the museum throughout the evening.

The fertile imagination of Present Music Artistic Director, Kevin Stalheim ties together all the moving parts.

Present Music returns to Saint John’s Cathedral for an annual Thanksgiving celebration on November 20 at 5:00 p.m.. Information on this program and the rest of the season may be found online.