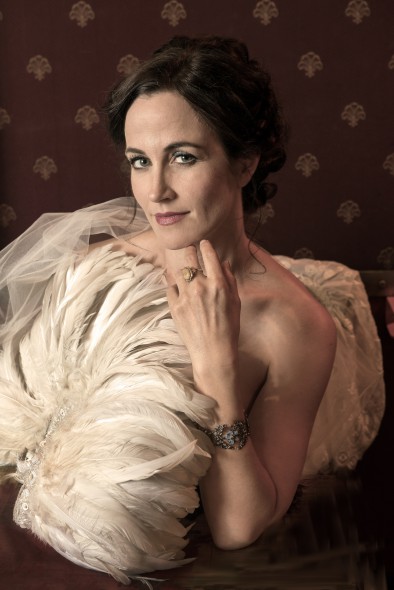 While reading Adriana Zabala’s bio, I got a bit weak in the knees. Considering her colossal credentials, it made me wonder why I haven’t done more with my life.

Zabala’s creation of the role of Carrie in The Florentine Opera’s original work, Sister Carrie, is an incredible feat, yet merely another medal on Zabala’s lapel, an added jewel in her crown.

When I asked the Mezzo Soprano about her gargantuan resume, she wasn’t self-effacing, just honest.

“I know it sounds obnoxious, but I was raised with a real sense of being active,” Zabala says. As for her particular activities, “My parents never imagined one of their kids would pursue opera,” she concedes.

The New York Times hails her as “a vivid, fearless presence,” and the L.A. Times as “extraordinary.” I’m not sure she should be afforded the right to be humble.

Zabala has seemingly performed on every international stage that has a reputation of excellence. In addition to Carrie, she has created roles in John Musto’s Volpone and Douglas Cuomo’s Doubt.

Robert Aldridge and Herschel Garfein’s Sister Carrie, based on Theodore Dreiser’s classic novel published in 1900, is a world premiere presented by The Florentine Opera at the Marcus Center for the Performing Arts on October 7th and 9th.

Aldridge and Garfein are still riding high on the success of their adaptation of Sinclair Lewis’ Elmer Gantry, which was another coup for the Florentine, whose 2010 performance was the basis for the show’s highly acclaimed recording on the Naxos label.

Carrie is not your classic heroine, but Zabala doesn’t condemn her for that. “From the first time I read the script I understood the buzz around this piece,” Zabala says. “I known the collaborators very well, but I hadn’t read Dreiser before and only knew him through his literary reputation. I’ve always been a passionate consumer of literature.”

Zabala says her role as a performer and artist is to honor truths and examine life and human nature, whether it be painful or ugly. “I look closely at human nature in context of socioeconomic conditions. I think Dreiser was very brave for his time period and the subject matter he addressed.”

Sister Carrie was shunned and banned, believed to be obscene at the turn of the 20th century. Dreiser was addressing a woman doing what she had to do to ‘pay’ her rent. Falling in love with a married man and living with him. Then she pursued her independence by being a stage performer. She did all those things and Dreiser never seemed to judge her.

In the first act, Carrie has a solo monologue and is onstage a ton. There’s a recurring phrase and theme throughout the story: In one form or another, things are ‘paid’ for.

“It’s really fraught phrase,” Zabala says. “It’s most obvious when it happens in the opera. On one level, it’s a pragmatic statement. The apartment—it’s all ‘paid for.’ On the next level, Carrie is paying for the apartment on what she agreed. She sees she’s paid for the place.”

Zabala says it’s a principle that plays out to the end. So much so, the opera ends literally on a high note, at the top of the soprano’s range—stunningly high notes. The theme is almost a play within a play, ending with the gloves, jewels, hands in the air, which Zabala says paints the picture of success, triumph, independence.

But what has Carrie — and Zabala — paid emotionally to get there?

“I’m always completely game and committed to going to the center of the story,” Zabala says. “It’s not unusual for me to feel that way, I get very involved. As it’s a new piece, I get to be part of creating it, originating and creating a role. I get to try to shape that.”

Zabala also created the role of Sister James in Doubt. This experience helped her approach the role of Carrie.

“What John Patrick Shanley had in mind when he wrote Doubt is so beautifully constructed. Sister James finds sincerity as much as possible. You have to get inside her. It’s a ping pong match and a slugfest. It’s being in the middle of that, hearing each person’s circumstance and mindset.”

As he was writing Sister Carrie, Dreiser used “Flesh and the Spirit” at first as a working title. I asked Zabala if she could understand that title.

Yes, but…“He wouldn’t have been writing for a general audience with that title,” Zabala says. “It would been too elusive. Sounds like taking titles from Shakespeare. His editor probably dissuaded him.”

Whereas the ultimate title is more powerful, she thinks. “My grandparents, great grandparents all come from different backgrounds and they refer to good friends as ‘Sis’ or ‘Sister.’ That’s a bit of the southern thing left in my life, a very salient part of my southern upbringing.”

Zabala says there are no words to adequately describe her co-star, Keith Phares.

“There’s a point at the end, and it gives me chills right now. Keith’s character Hurstwood has absolutely fallen apart. His degeneration is very painful to watch and it’s converse to her ascent.” Carie has become a star in an illustrious play and some of Hurstwood’s last lines are ‘that’s my Carrie. Good ol’ Carrie. Sister Carrie.”

“The last thing he says, it kills me,” she says. “It’s not words between lovers, it’s just someone he knew, like ‘Ol’ Sis. That girl I liked. After all that’s been taken from him, he can’t even claim a friendship.”

The role is particularly demanding as Carrie has 14 scenes and 12 costume changes.

“My wardrobe assistants are like a pit stop in a NASCAR race,” Zabala quips. “Carrie is traveling many steps, quick scenes in her transformation. It’s a seamless transition.The whole show is like a two-and-a-half-hour montage.”

In addition to being a tenured professor, Zabala is on the road a lot.

“It forces a very healthy discipline, to be honest,” she says. “It prioritizes what one has to do to maintain vocal health. Very mercifully it makes you healthier and balanced in the rest of your life. Vocal health is holistic health.”

Zabala says she’s busier than she’s ever been in her life–yet she remains very sedate. “I’ve never been more calm in my life. It’s counterintuitive but I attribute it to focus. I’m getting what I asked for and you have to be careful with that. The road life, the single life, all of that comes to a point of reckoning.”

It’s a zen thing, she says, handling all that. But I’m exhausted just listening to her.

2 thoughts on “Classical: How to Make ‘Sister Carrie’ Come Alive”