The New Era of Restricting Voting

Wisconsin one of 20 states with a maze of new rules, as 1,400 new laws added 37 different voting requirements.

By Emily L. Mahoney, Wisconsin Center for Investigative Journalism - Sep 7th, 2016 05:30 pm
Get a daily rundown of the top stories on Urban Milwaukee 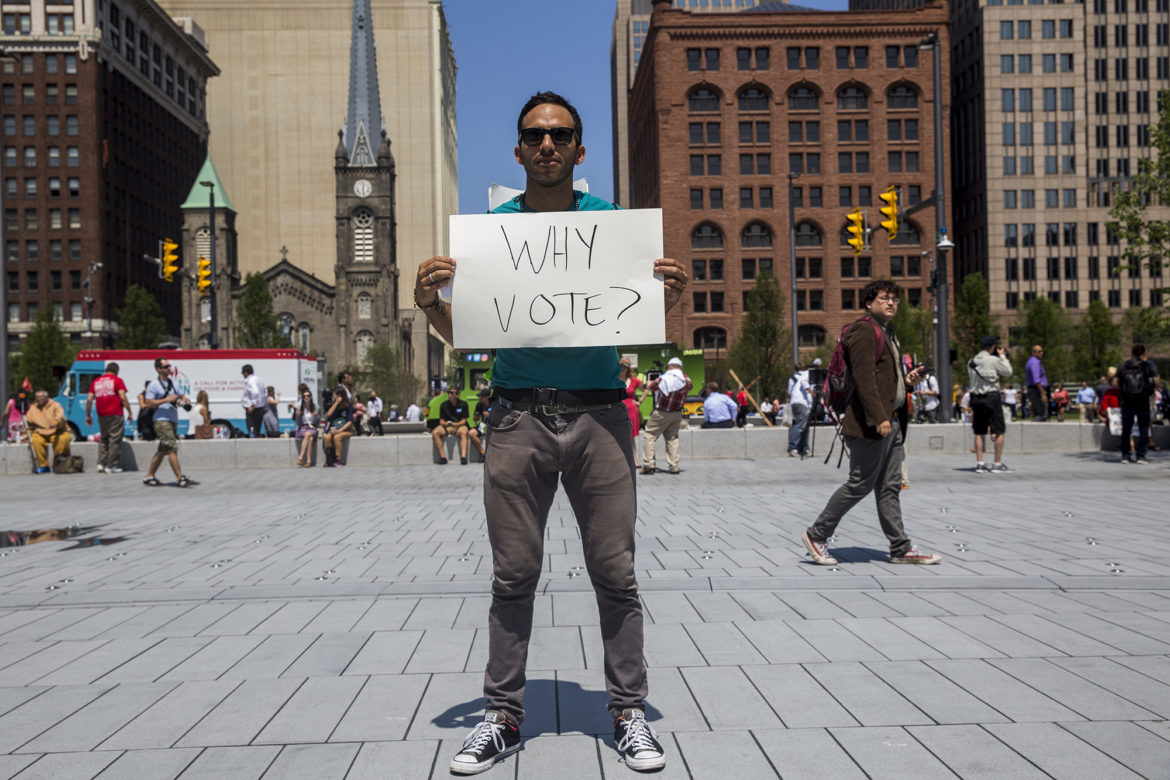 Oskar Mosco, 35, traveled from Santa Barbara, Calif., to protest in front of the Republican National Convention in Cleveland in July. Voters in 20 states, including Wisconsin, will face additional requirements and restrictions to vote, passed since the last presidential election in 2012, including presenting specific forms of identification at the polls. Photo by Emily Mahoney of News21.

After four years away from Wisconsin, Mark Sahba returned to Madison last year. The 59-year-old said he was stunned by the “ton” of new requirements to register and vote in a state where he had been casting ballots without a problem for 40 years.

For one thing, Sahba needed a copy of his birth certificate, which was issued in New York, so he could get a driver’s license so he could present it at his polling place.

“You have to know certain things, like, what hospital was I born in,” Sahba told News21. “I have no idea. Everyone who would know that is gone. So little things like that ended up becoming stumbling blocks that I had to get over.”

The process took Sahba, a project manager at the translation company Geo Group Corp., two months and cost more than $130, he said.

With the presidential election just over two months away, millions of Americans like Sahba will be navigating new requirements for voting — if they can vote at all — as state leaders implement dozens of new restrictions that could make it more difficult to cast a ballot.

Since the last presidential election in 2012, politicians in 20 states passed 1,400 laws implementing 37 different types of voting requirements that they said were needed to prevent voter fraud, a News21 analysis found. More than a third of those changes require voters to show specified government-issued photo IDs at the polls or reduce the number of acceptable IDs required by pre-existing laws.

“We have two world views: the people that think voter fraud is rampant and the people who want to push the narrative that it’s hard to vote. The bottom line is neither is true,” said Republican Ohio Secretary of State Jon Husted, who has been sued several times over his state’s removal of some voters from the registration rolls, elimination of same-day registration and curbs to early voting. “I believe that both political parties are trying to push a narrative that suits their agenda.”

Adding to the uncertainty for millions of voters, not all the changes may be in place for the November election because some were limited or overturned by court decisions still subject to appeal. 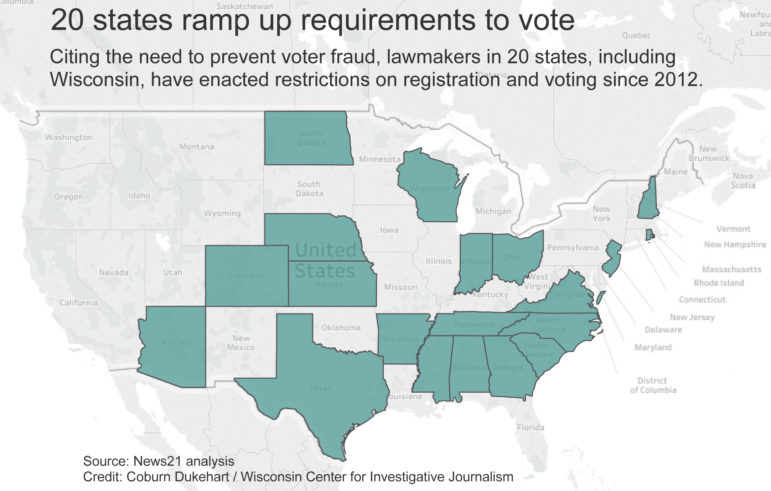 Click on the map for an interactive version that shows the requirements, by state.

In addition to requiring voter ID, they reduced the number of days voters can cast ballots in person before Election Day, placed new restrictions on voter registration drives, eliminated opportunities to register and vote on the same day, or moved up deadlines to register and still vote on Election Day.

Republican-controlled Texas and Wisconsin passed the strictest voter ID laws, while North Carolina and Ohio are among those that eliminated same-day registration and reduced early voting days.

In Wisconsin, a federal judge in Madison has overturned restrictions on early in-person balloting after finding the limits were primarily aimed at keeping African-Americans in Milwaukee, who reliably vote Democratic, away from the polls.

“These laws can be explained by partisanship and by race,” said Wendy Weiser, director of the Democracy Program at the Brennan Center for Justice, a legal civil rights advocacy group. “It’s hard to reconcile these actual laws with the stated purpose. The more reasonable and likely explanation is political self-interest. Voting laws are a way to restrict voters you think are more likely to vote for the other side.”

“It’s a discriminatory statement to say that in today’s society, people regardless of race or status aren’t able to get photo ID, particularly when the state provides it for free,” he said.

Gov. Scott Walker, seen here at the executive residence in 2014, said criticisms over Wisconsin’s current voting laws are unfounded. Photo by Kate Golden of the Wisconsin Center for Investigative Journalism.

A federal court had ruled that, for the November election, Wisconsin must offer those without photo ID the option of signing an affidavit swearing to their identity. But that decision was later stayed by a federal appeals court, so there will be no affidavit option on Nov. 8.

Those decisions were part of the flurry of court rulings in late July and early August that struck down, weakened or altered new voting requirements in Wisconsin, Texas, North Carolina and North Dakota because, the courts concluded, the laws would disenfranchise people of color. In some cases, judges ruled that the laws’ discriminatory effect was intentional.

By contrast, some Democrat-controlled states, mostly in the West and New England, have passed laws that gave voters the option to register every time they walk into a motor vehicles office or at the polls on Election Day, made it easier to vote early or have converted their elections to an entirely vote-by-mail system.

Republican state leaders and conservative advocates of voter ID and other new requirements have insisted that they are necessary to prevent voter fraud and protect the integrity of elections.

But a 2012 News21 50-state analysis of cases since 2000 found that the rate of voter fraud is infinitesimal compared with the total number of voters nationwide and that in-person voter impersonation on Election Day — the type of fraud voter that photo ID is designed to prevent — is virtually nonexistent.

A 2016 update, in which News21 revisited five sample states that enacted new voting requirements to reduce fraud, again found few convictions for voter fraud and none for voter impersonation.

The ongoing political and legal wars over voting rights date to the mid-2000s, when the first new state voting requirements were enacted. Their number greatly increased after the 2010 off-year election, in which Republicans more than doubled the number of states they controlled — from nine to 20 — with majorities in state legislatures and the governor’s party, according to a News21 analysis of data from the National Conference of State Legislatures. Democrats, by comparison, lost control of five states, going from 16 to 11. Party control remained divided in the other states. 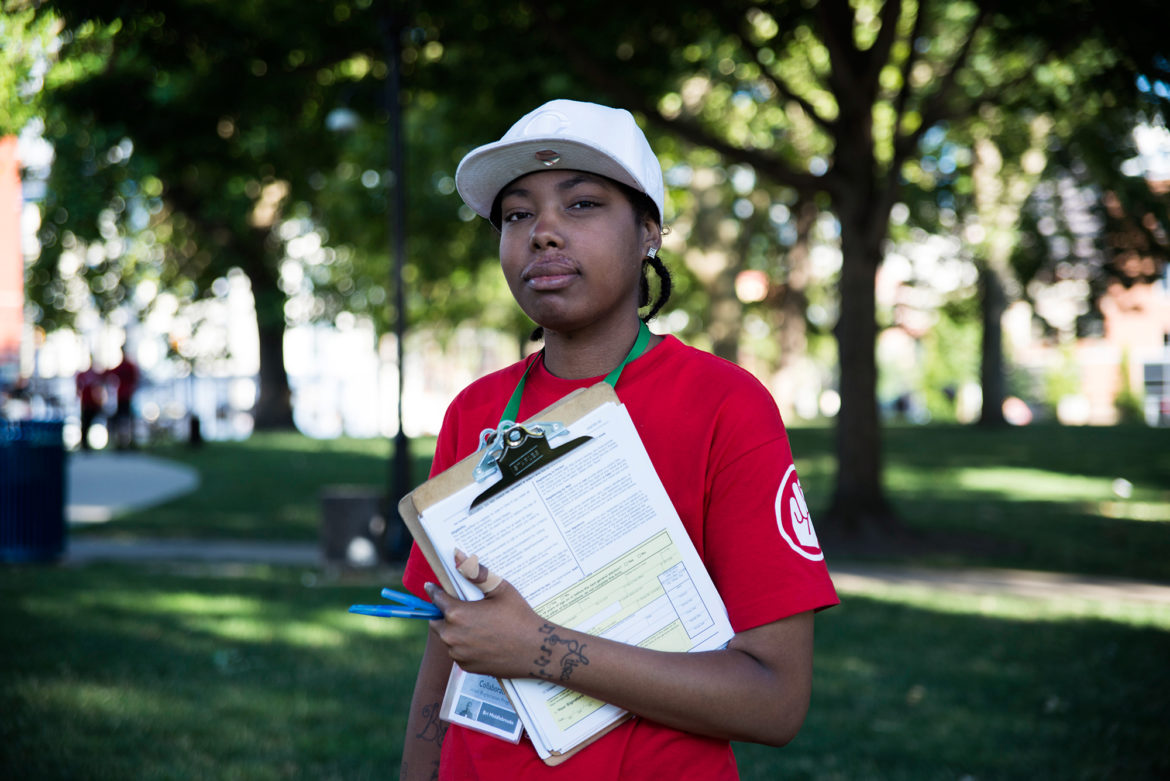 Brittany Middlebrooks is part of the grassroots Amos Project in Cincinnati, Ohio. The group works to combat recent name removals from voter registration lists. Photo by Roman Knertser of News21.

A 2014 study by the U.S. Government Accountability Office found that laws requiring specific kinds of voter ID in Kansas and Tennessee depressed voter turnout in those states in 2012, with African-Americans and young voters disproportionately affected. Ten state-specific and nationwide studies within the GAO report found that African-Americans and Latinos were always less likely to have the required voter ID than whites, and Native Americans and Asian-Americans were frequently at a similar disadvantage.

The National Commission on Voting Rights, a civil rights advocacy group, similarly contended in a 2014 report that minority populations were more likely to be disenfranchised by voter ID requirements and reductions in early voting and same-day registration, new restrictions for voter registration drives and limits on the restoration of voting rights for felons who have served their sentences.

Richard Hasen, an expert in voting law trends and a professor of political science and law at the University of California-Irvine, told News21 he believes the nation is now at a turning point because of the recent court decisions overturning new voting requirements in some states.

“In the past, courts seemed to be divided on partisan and ideological lines on how to approach these cases, but in 2012 and now in 2016, we see the courts becoming skeptical of what appears to me to be Republican overreaches in making it harder to register and to vote,” he said.

The court decisions could deter more states from instituting similar laws, Hasen added, because “it signals they are not going to have an easy path.”

4 thoughts on “Voting Wars: The New Era of Restricting Voting”