Scenes from the second annual Ride Across Wisconsin, from Dubuque to Kenosha. 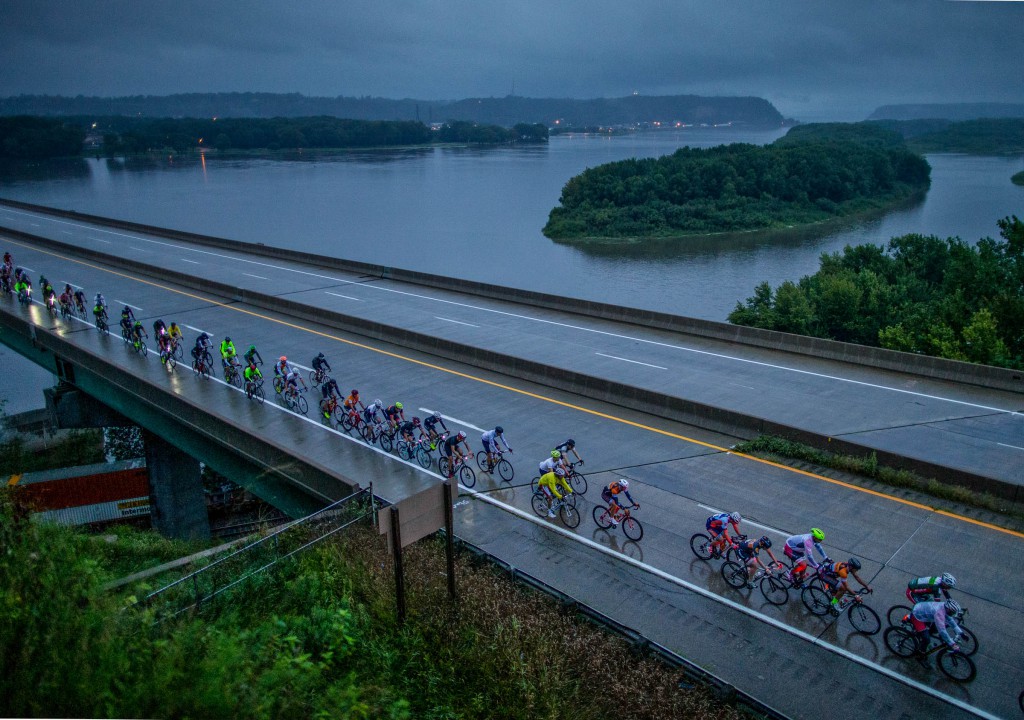 “Sunrise” over the mighty Mississippi. Photo by Jeffrey Phelps

I was on the bus from Kenosha to Dubuque. My seat mate, who I didn’t know, opened the conversation by asking me about what I was reading, a Jim Harrison novel called, “A Good Day to Die.” It turned out that Al was a startup entrepreneur and his current project was a dining ap (it’s called Hanker, as in what do you have a hankering for?) that allows people to start with what they have a taste for and then sort restaurants by the food they want. When I got home I read an article in the New York Times about the relationship of cycling to the tech world in Silicon Valley. Turns out it happens along the Wisconsin-Illinois border as well. 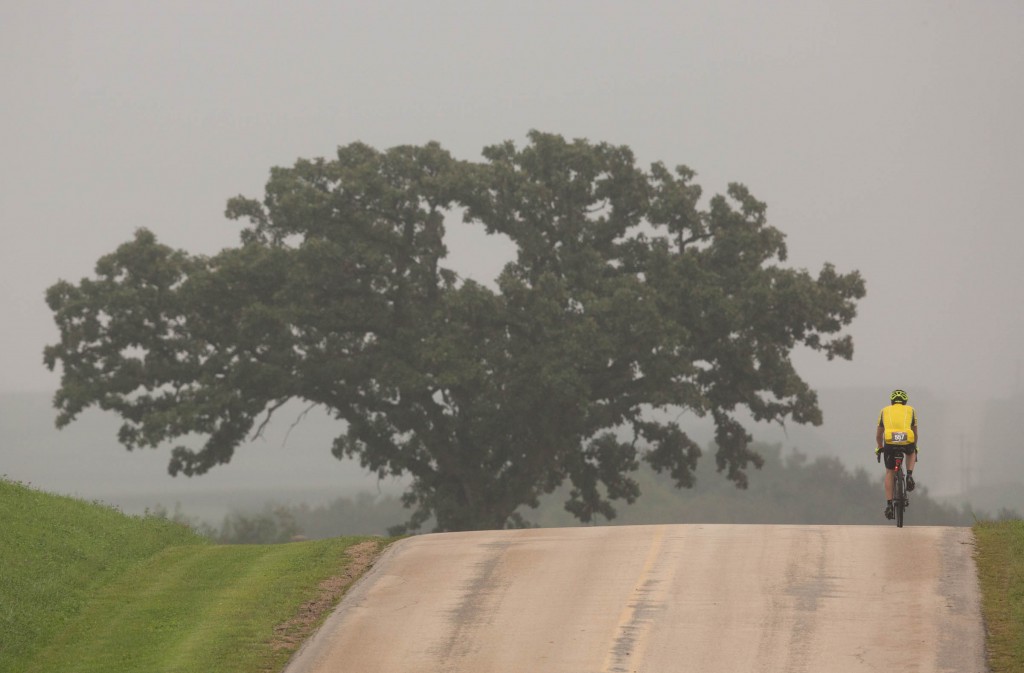 Jens Voigt brought the house down with that remark. We were in Dubuque at the pre-ride dinner on Friday night and Jens was being interviewed by Robbie Ventura. When Robbie opened it up to the crowd for questions, the first one was from a guy who reminded Jens that last year in Kenosha he said RAW was one of the hardest rides he had ever done and for this year he’d have to seriously train for it. When he was called on it, Jens was disarming in admitting that he hadn’t trained at all. It made everybody in the crowd who was questioning their own fitness for the ride (that is, everybody) feel more at ease. 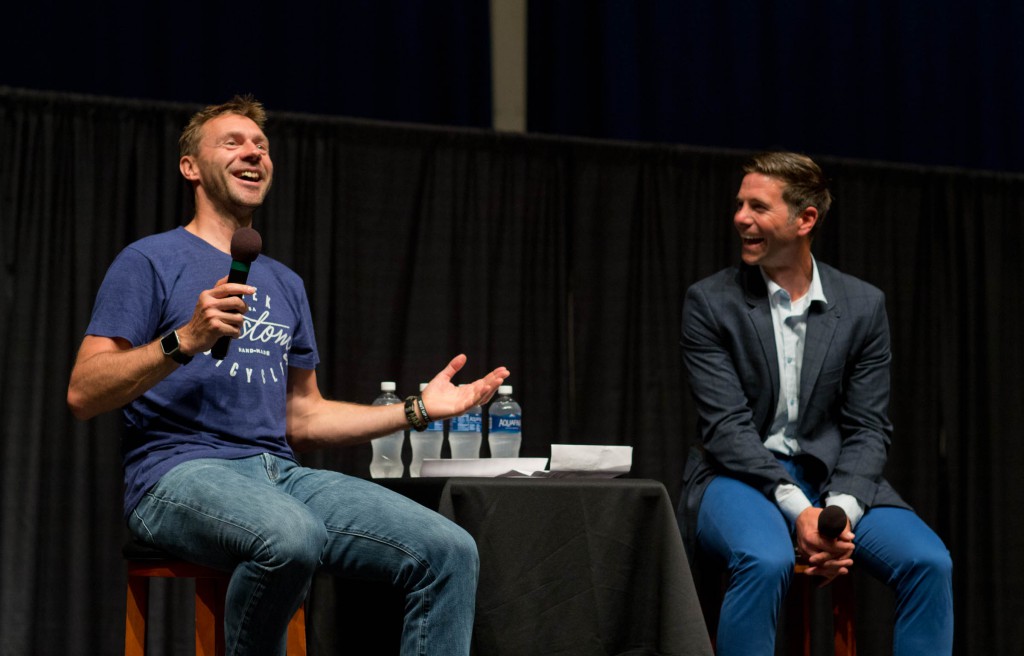 Why train Robbie, it’s only pain! Photo by Jeffrey Phelps

“You have any influence here?”

It was a dark and stormy night, but as the 6 a.m. RAW start time approached the rain stopped (just like last year) and only a heavy mist hung in the air. But as zero hour came and went, John Burke was eager to get started. We treat all our riders with respect, but it’s fair to say that John has earned just a little more respect. John, of course, owns Trek and he delivered 80 Trek riders, the Trek Racing Team and Jens Voigt himself along with tons of in-kind support for the ride. So, when John wants to get going we want to let him go. But ride boss Tom Schuler had driven across the bridge into Wisconsin and he reported back that the cloudy morning meant it was still pitch black over there and not as safe as he wanted. We delayed the start until sun up at 6:23. To John’s question about my influence, I answered, “No, not much. It’s Schuler’s call and it’s all about safety.” John understood and went back to his place at the starting line. 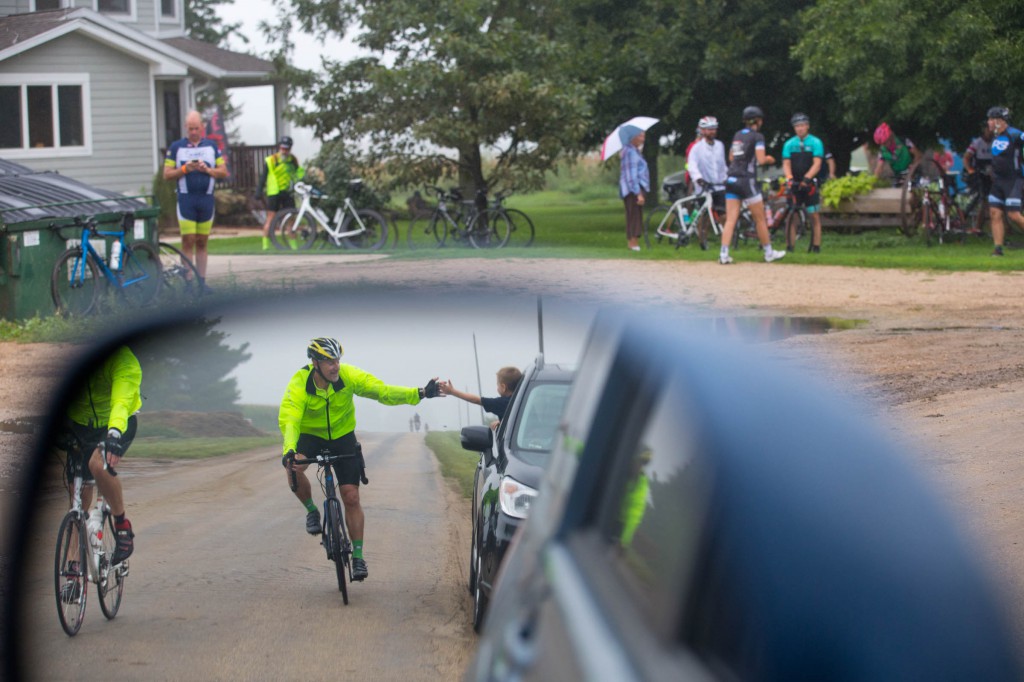 Tifosi, Wisconsin has got them too. Photo by Jeffrey Phelps.

I rode just the second day of RAW from Beloit to Kenosha on Sunday. About 12 miles form the finish I took a planned break to rest my legs and take on a little more nutrition. A group of faster riders approached and gave me the thumbs up/thumbs down question. I gave them the thumbs up, but it occurred to me that had I indicated a problem they would have stopped and ruined their pace to help me. Then within a couple of minutes the RAW medical van stopped and the staff inside asked me, “you okay?’ I assured him I was and I soon remounted and finished my ride, reflecting on what a great community of cyclists we have out there looking for one another and also how well the ride was organized to keep us all safe. 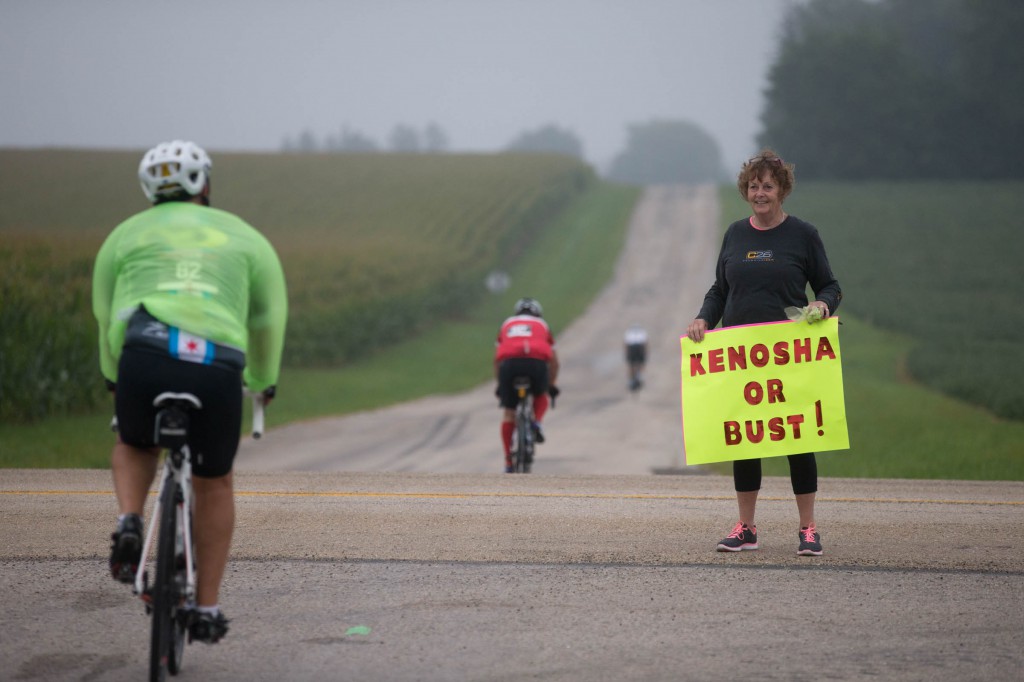 Kenosha it is then!

“You figured out a solution.”

Here’s a note we received after RAW 2016 was history and it was indicative of the feedback we received.

Thanks you so much for all your help in getting me from Dubuque to Kenosha when I was so sick. I know you had a thousand things going on and the last thing you needed was a sick rider to deal with. Yet you figured out a solution and instituted it.I also want to mention how gracious the two people were who drove the truck I was in. The last thing they probably wanted was some sick guy sitting in back about to throw up. But you would never know it. They were very friendly and concerned about my predicament and were willing to do whatever it took to help me. Shame on me for not getting their names.As I write this I realize you are still working on the RAW, sheparding the process for the two day riders. My experience, after doing the RAW last year and getting a little behind the scenes look at this year’s one day, is that those riders are in good hands! Thanks again, Bill

Thanks to you, Bill. And thanks to everyone who worked, volunteered for or rode the most epic ride in Wisconsin. RAW is fast becoming a bucket-list event not just for Wisconsin but for the Midwest and riders who came from 21 states across the country.

Thanks to everyone in the Trek family for helping to bring the Jensie and the Trek-Segafredo team along for the ride. Thanks also for the countless levels of support from helping to market the event, to rounding up almost 100 employees to do the ride, and for letting us leverage the stellar reputation of the Trek name! Our Ride Across Wisconsin would not be the success it is without Trek. 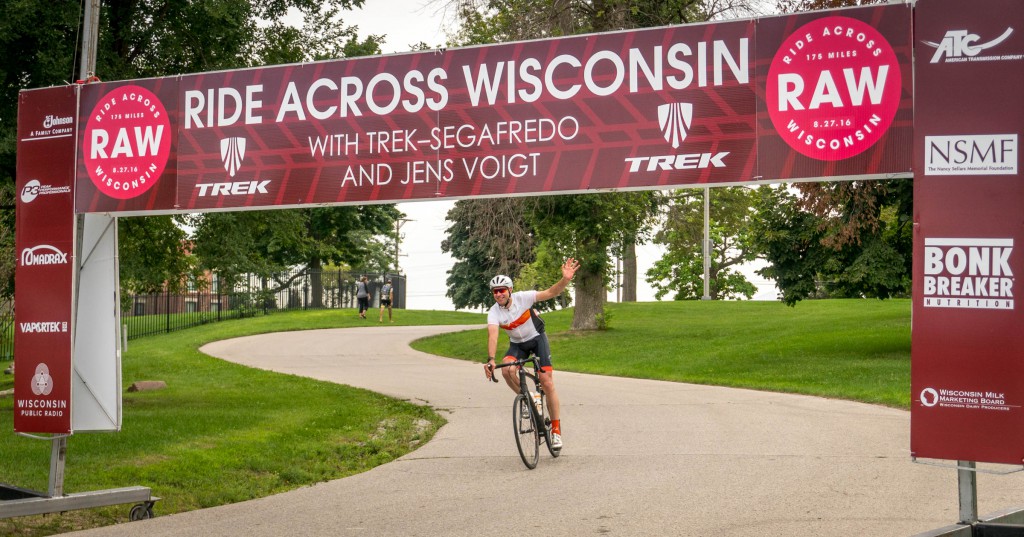 Thanks to all our sponsors! You deserve more than a shout out and logos on the finish truss, so thanks for supporting our cause. And thanks to this guy for grinding out the full 175 again in year two.

We are also grateful to our sponsors, who through cash donations or generous gifts of product (chocolate milk!), help us put on a special event. 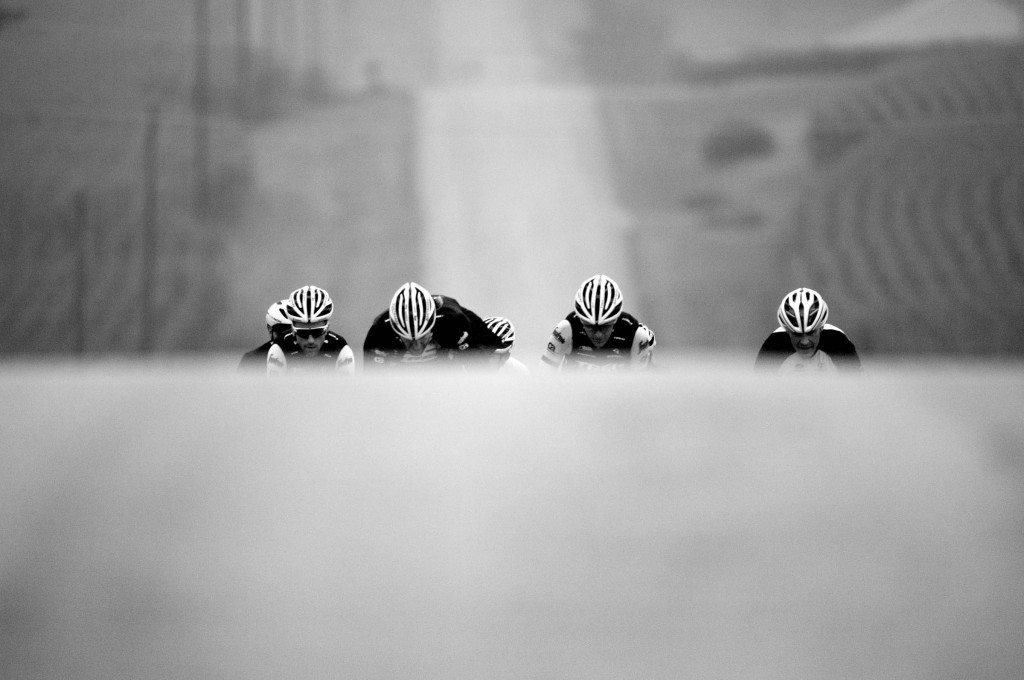 Of course we also need to thank all the communities we ride through for putting up with the disruption that a rolling peloton of more than 800 people on bicycles can cause. More than put up with us, we feel welcomed by the cheering encouragement from families watching in their front yards of their farms, to the local cheerleading squad that brought the riders into Beloit. Thanks to Jenny and Kerry Holland and their kids for once again hosting a rest stop on their family dairy farm in Gratiot. Thanks to Dubuque for rolling us safely out of town and thanks to Kenosha for bending over backwards to help every time we asked for something. Thanks to the 4-H volunteers at the Monroe for helping out with your hands and your smiles. 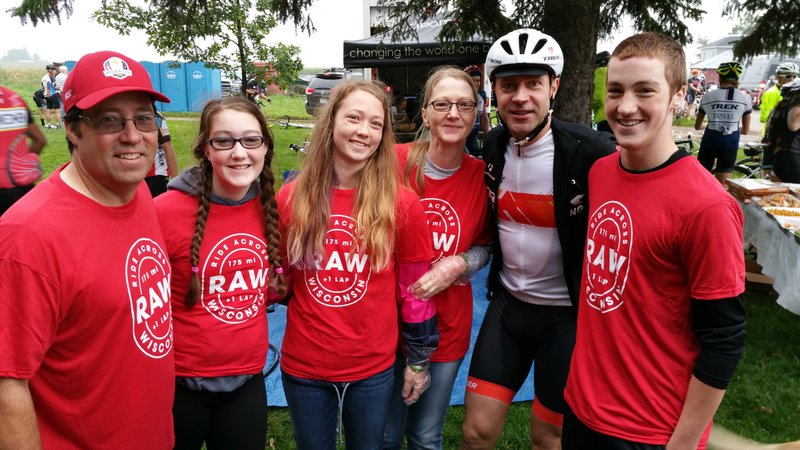 The Holland family hosted another great rest stop on their family dairy farm in Gratiot, and it looks like they adopted Jensie. Photo by John Trittschuh

Thanks to the generosity of our riders, we raised $3,081 for the 4-H groups along our route. As promised the Bike Fed will match that amount. We will report back soon after we are able to schedule a time to give a check to the 4-H families.

Soon we will be sending out a rider survey to get feedback on how we can improve the ride for next year. We will have have a more detailed report about this year’s RAW after we get our survey results. 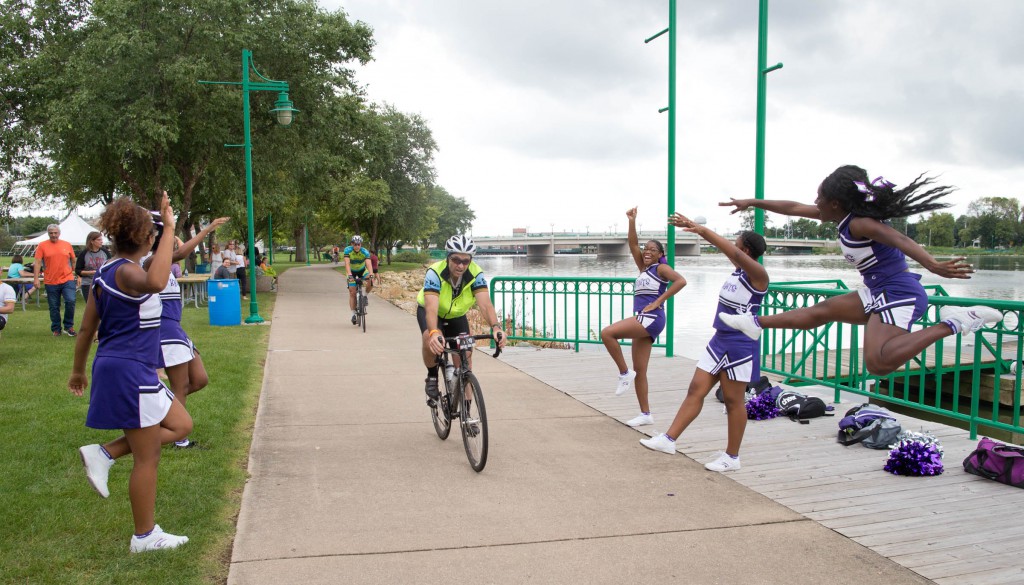 Thanks again Beloit, you’ve got spirit, yes you do!

Any scribes who took part in this year’s Ride Across Wisconsin are welcome to email us their write-up and we will share it here on our blog.

We will also be launching a discounted, limited-time early registration period for RAW Founders and 2016 riders. In the mean time, you can mark your calendars for Aug. 26th if you want to make sure you are part of the adventure for our third annual Ride Across Wisconsin! 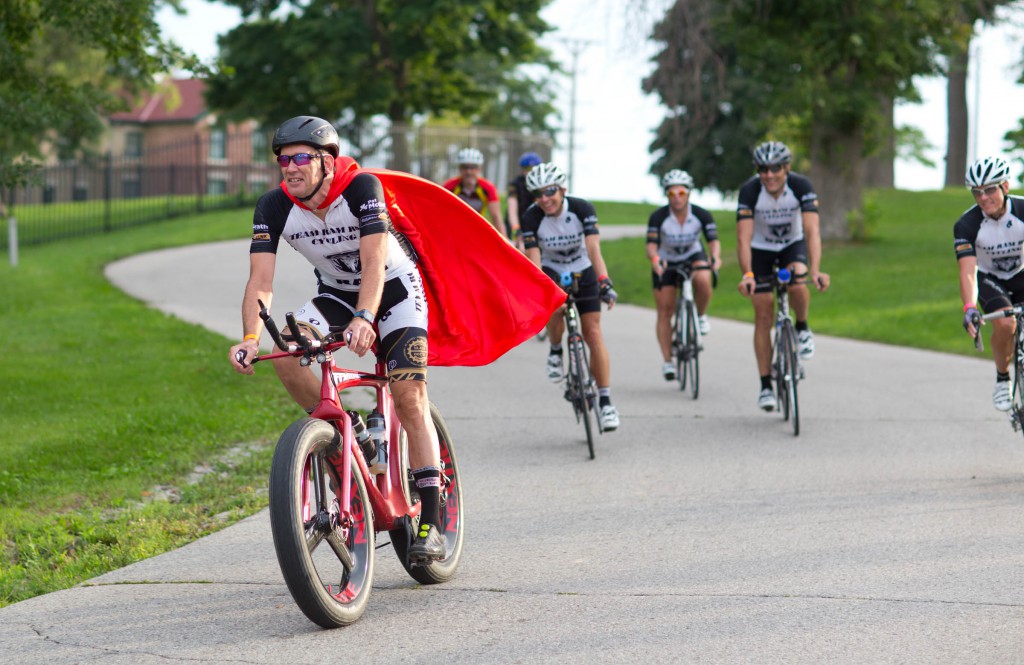 All 800+ of you who took the challenge to ride across Wisconsin are super heroes in our book. You all deserve a cape!

We have many more amazing scenic photographs from our friend Jeffrey Phelps in the RAW 2017 gallery on the Bike Fed’s Photoshelter site here. 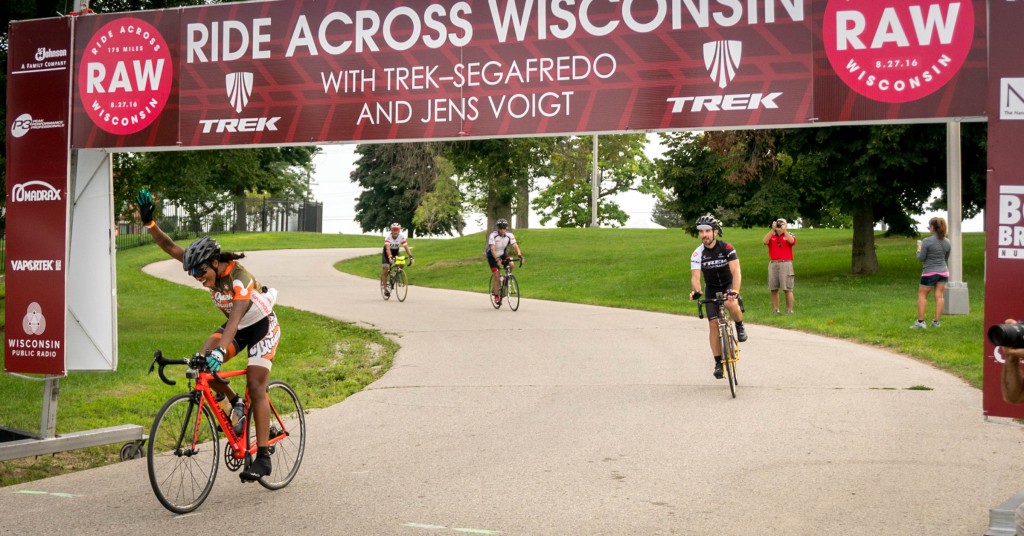 With this kind of attitude, it can’t be long before Ayesha McGowan realizes her dream of becoming the first African-American female pro cyclist in the United States!

3 thoughts on “Kenosha or Bust!”