Anti-Poverty Programs Are a Success

Percent of people in poverty dropped from 26% to 16% since 1967, with big impact in Wisconsin.

By Jon Peacock, Wisconsin Budget Project - Aug 8th, 2016 11:53 am
Get a daily rundown of the top stories on Urban Milwaukee

Speaker Ryan and other conservatives are calling for sweeping changes that would seriously weaken safety net programs, and a core argument for those changes is way off the mark.

In early June, Ryan and other House Republicans issued a report about reforming public assistance programs that contends that despite decades of substantial federal spending for safety net programs, “the official poverty rate in 2014 (14.8%) was no better than it was in 1966 (14.7%), when many of these programs started.”

At first blush, that sounds like a compelling argument, but it’s a red herring. Speaker Ryan’s claim is based on the official poverty measure, which seems logical. But that gauge of poverty, established by the Census Bureau in the 1960s, measures cash income only and excludes many forms of public assistance. As the Center for Budget and Policy Priorities points out about this poverty measure:

“…it ignores virtually all anti-poverty assistance created or expanded over the past half century, while counting the main form of assistance cut sharply over this period – cash assistance for families with children. You can’t learn anything about the efficacy of most anti-poverty programs by using a measure that doesn’t count them.”

The supplemental poverty measure paints a very different picture of poverty in America. Columbia University researchers have calculated the impact of noncash benefits on the rate of poverty, concluding that when noncash benefits are factored into the measurement of a household’s income, the percent of people living in poverty fell from 26% in 1967 to 16% in 2012. The chart below, which illustrates that trend and compares the two different measures of poverty, shows clearly the large, positive impact of the noncash safety net in reducing the impoverished portion of the population. 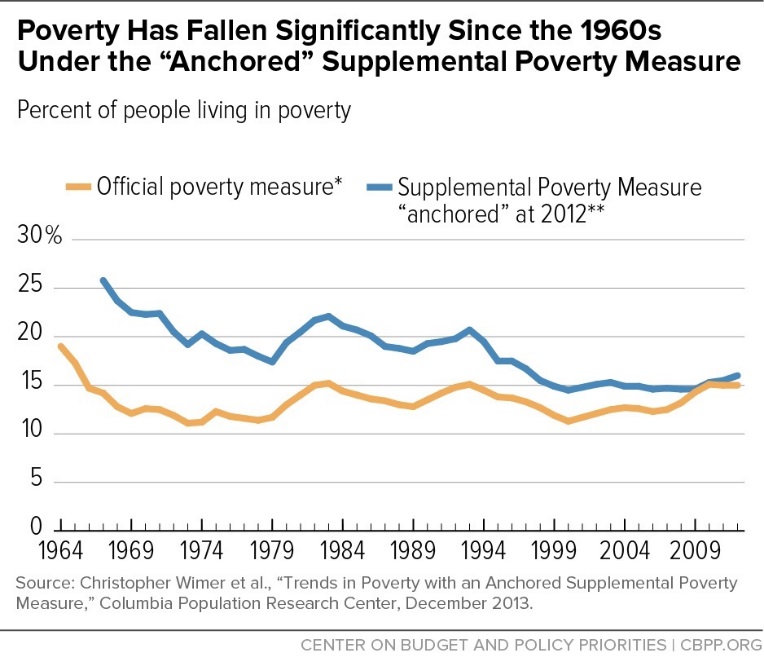 Looking specifically at Wisconsin, an analysis by the Center on Budget and Policy Priorities also shows the importance of safety net programs. They calculate that:

Public assistance programs aren’t perfect, and it’s definitely worth looking at ways that they can be improved to lift more people out of poverty and ensure that people who are willing to work hard have a way of climbing into the middle class. A sensible improvement that has been recommended by the President, Senator Baldwin, and also Speaker Ryan, is to significantly increase the meager Earned Income Tax Credit now provided to childless adults with low-wage jobs.

We appreciate that Speaker Ryan has been willing to talk about poverty programs and ideas for improving them. However, by using a measure that excludes most of the government’s poverty-reduction investments, he sets back the public discourse about the effectiveness of current programs.

52 thoughts on “Wisconsin Budget: Anti-Poverty Programs Are a Success”