Circa 1873, a celebrated company located on what is now Plankinton and Michigan. 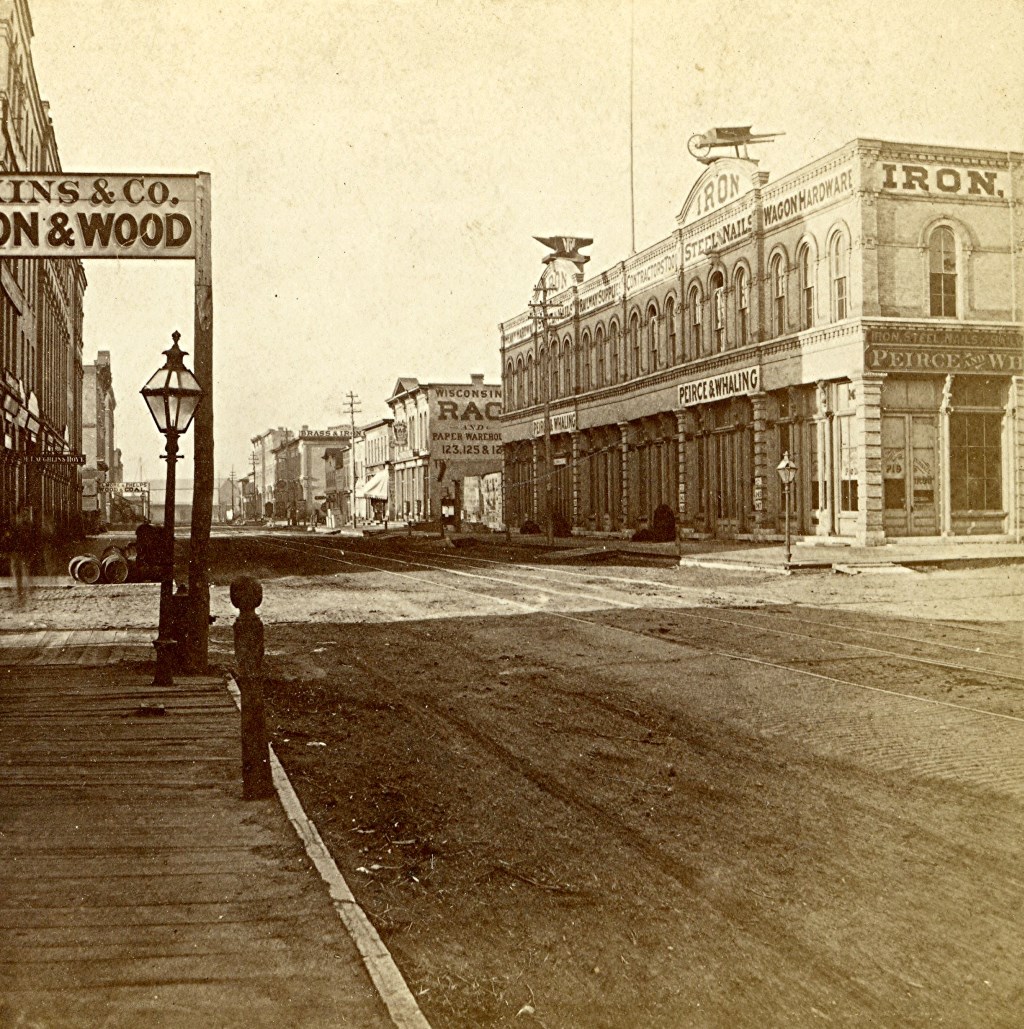 As our last column noted, one of Milwaukee’s less-known strengths in the 19th century was the hardware business. Three of the leading hardware businesses in town were the Nazro, Pritzlaff and Frankfurth companies.

Another company was Peirce & Whaling. This is a view of their establishment c. 1873 during a time of rapid growth for the firm. This was at their location on the west side of W. Water St. (now Plankinton) between Sycamore (now Michigan) and Clybourn  streets. Note the wide range of products offered and listed toward the top of the building, as well as the oversized wheelbarrow and anvil used to attract customers.

Pierce & Whaling were first listed at this address in the 1870 Milwaukee city directory, and before this were listed on Main St. (now Broadway). The company was founded in 1867, according to an account in the January 1875 issue of the Milwaukee Monthly Magazine:

“During eight years of successful business the house of Peirce & Whaling has earned a reputation and established a trade acquired by but few houses in a lifetime. Although having received many tempting offers to remove its business to a neighboring city, this firm has thus far declined them, preferring to join its fortunes with the city in which it has achieved its success, and believing it to be as favorable a location for the maintenance of a large trade in their line of business as any in the West. The large and growing business of the house is conducted under a system suggested by years of practical experience, so complete that its minutest details never fail to receive personal supervision… The sales of this house run from one and a half to two million dollars per annum, being the largest sales of iron and heavy hardware of any house in the west, and the tonnage handled necessary to supply this trade is enormous, frequently an entire train being made up of their freight.”

A publication called The Wisconsin Lumberman, and published around the same time, in August 1874, also lauded the company for “their perfect machinery and admirable methods of doing business [and] their wisely liberal style of advertising… this energetic house is as widely-known as any wholesale house in any line of business in the northwest…We have learned, to our surprise, that the item of railway supplies was never more than one-fifth of the entire business of the house and that this proportion has been materially lessened…during the past year… but has been more than balanced by gains in the trade with manufacturers and dealers in all parts of the northwest.”

On December 26, 1883, the New York Times reported that James Whaling, “the well-known hardware man,” was killed by an accident in Milwaukee, “but the particulars cannot be ascertained.” The story said the Peirce & Whaling company had failed “a half-dozen years earlier,” or about 1877, and Whaling had moved to Chicago, than later New York City, doing business in both cities before moving back to Milwaukee.

Today the building where Peirce & Whaling was located no longer exists and is the site of the Gimbels parking structure.