The Largest Hardware Store in America

John Nazro's huge hardware store was in a building still located at 2nd and Seeboth. 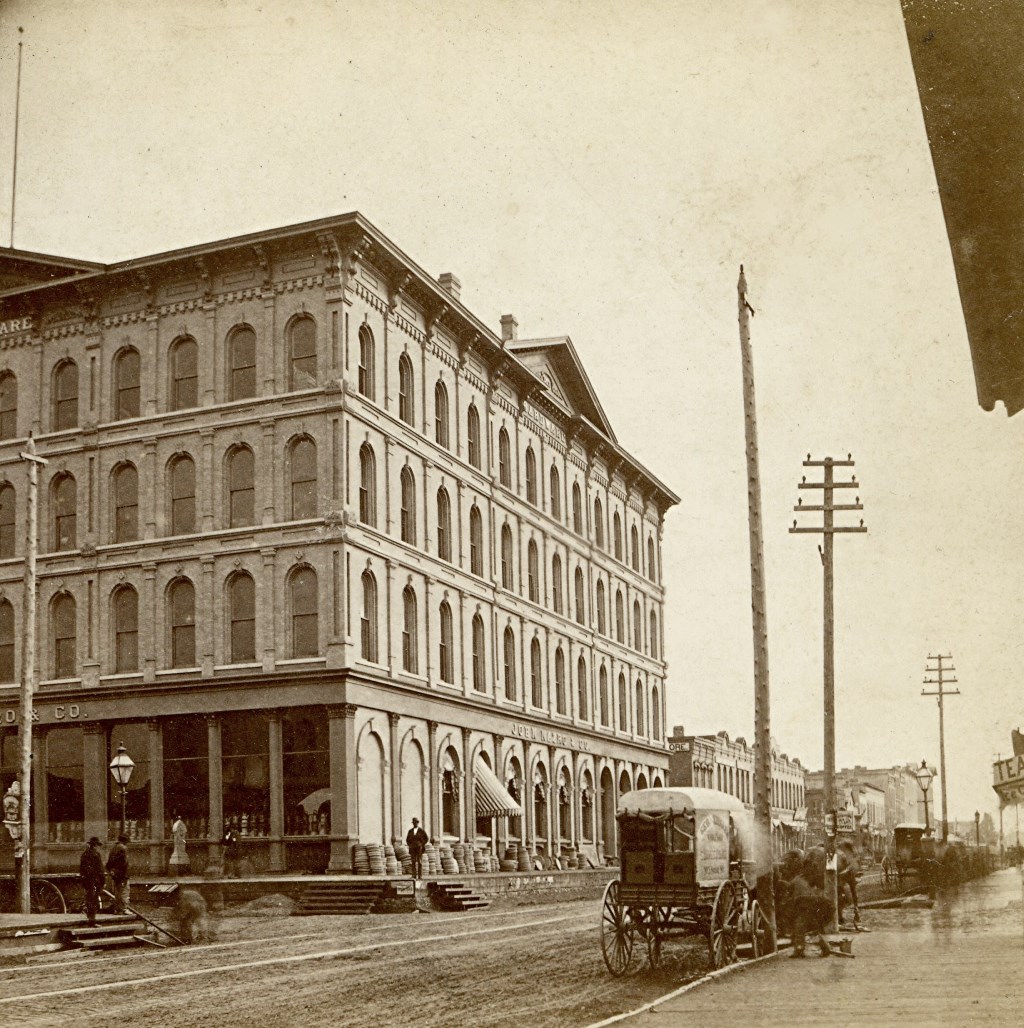 One of Milwaukee’s less-known strengths in the 19th century was the manufacture and distribution of hardware. The Pritzlaff Hardware company, founded in 1850 by John C. Pritzlaff (1820-1900), was one of the leaders. Located at 299 Third Street, it was known for selling hardware, sewing machines, and toys through mail order catalogs to wholesale buyers throughout the United States. Later the company expanded at a new location at Plankinton and St.Paul, a building that still stands today.

Pritzlaff soon had competitors. William Frankfurth (1829–1891), a German American “Free Thinker” who immigrated to Milwaukee in 1850, got his first job with Pritzlaff Hardware. By 1861, he had founded his own hardware firm, the Frankfurth Hardware Company. By 1875, the company had expanded into the wholesale business and quit doing retail; It became one of the largest hardware wholesalers in the Midwest, distributing to over 1,200 retail stores in Wisconsin, Michigan, and Illinois.

Pritzlaff, who originally came to Milwaukee in 1841, had been employed as a porter by Shepardson and Farwell, which was later acquired by Henry J. Nazro & Company. Nazro was a silent partner and carried most of the financial burden when Pritzlaff opened his hardware store. Nazro later withdrew from the company.

Nazro, meanwhile, had formed a partnership with John Nazro (they were believed to be brothers) who had settled in Milwaukee in 1847. In May, 1848, John Nazro had bought out JC Cramer & Co., dealers in hardware, and started in that business. In 1850, he united with Henry to create Henry Nazro & Co. In May 1854, Henry Nazro left Milwaukee to reside in New York, leaving the management of the business to John. By then, the company was said to have “three acres of iron and hardware under one roof” and aspired to be “second to none in the United States.”

In 1860, the name of the firm was changed to John Nazro & Co. and two years later he became the sole proprietor. In 1873 John Nazro would gamble on constructing a building located at the southeast corner of S. Water and Reed St., now Seeboth and S. 2nd St., which when completed a year later was said to be the the largest hardware building in America. The building was erected by George Burnham, best known at the time for manufacturing Cream City Brick. The new building boasted more than one million cubic feet of storage for goods. The brick and heavy timber building with beautiful cast iron Corinthian columns has a basement and four full stories.

This photo is from a stereoview of that building taken shortly after its completion, c. 1874 (photographer unknown). The timing was bad as in 1873 there was a severe national financial crash. But the location would prove a fine one, as it was very close to Milwaukee’s Union Depot. And as it turned out, Milwaukee would recover very quickly form the financial panic.

Nazro would only operate here for only a few years, moving to smaller quarters in 1878 and finally retiring in 1880.

This building still stands, although due to many remodellings it bears little resemblance to its early days. It still boasts a unique feature. Having been built on an area of once navigable waters that have since dried up, the building’s basement sits 20 feet above the hull of a wrecked vessel that was buried where it sank.

3 thoughts on “Yesterday’s Milwaukee: The Largest Hardware Store in America”