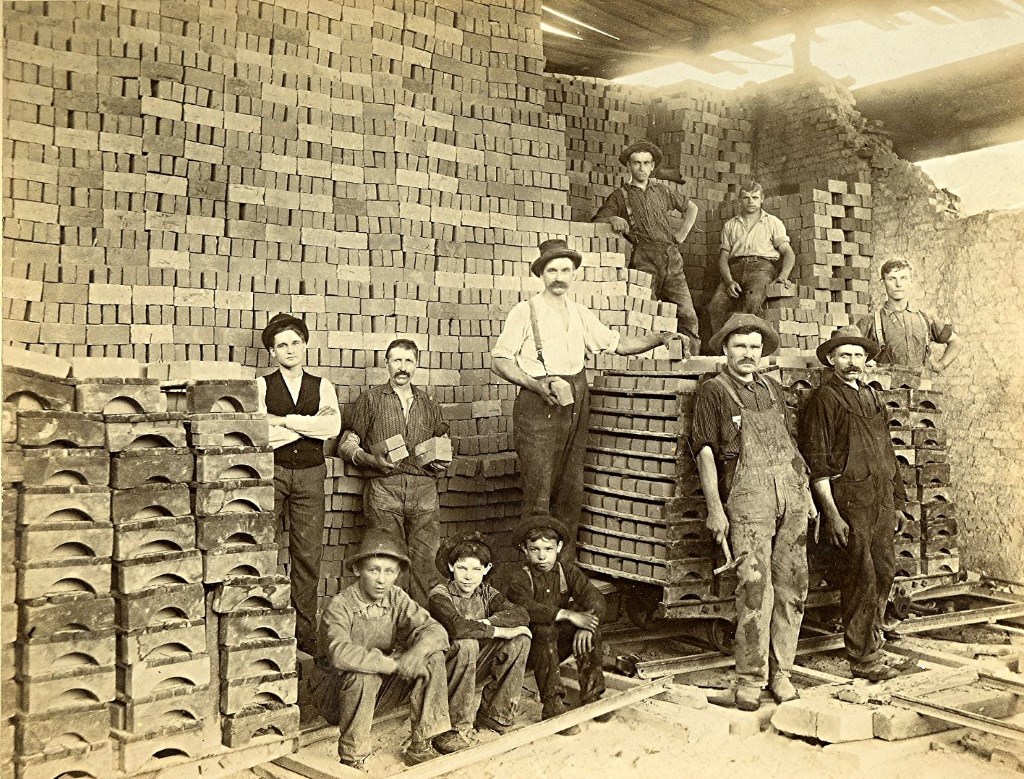 In the 19th Century Milwaukee would earn the nickname “Cream City.” This had nothing to do with the dairy industry but instead the term referred to the brick produced locally which had a pleasant, yellowish-cream color. The brick was produced from the characteristic clay, containing lime and sulfur,  embedded along the western shore of Lake Michigan.

Brick was produced here from the very earliest days of Milwaukee’s settlement. In 1835 city founder Solomon Juneau hired a Canadian brickmaker, who was living in Mackinaw, Michigan at the time, to produce bricks here. The amount produced was minor in these early years as wood was the preferred material for construction. But by the 1850s production would increase greatly and many buildings constructed at the time were built with this lovely brick. Few buildings of this vintage survive today, but good examples are St. John’s Cathedral and the Matthew Keenan House at 777 N. Jefferson St.

In 1881, when production of the brick was at its peak there were several companies producing it. The bulk of the clay was found along the bluffs overlooking the Menomonee Valley although Bay View also had a few small brick factories. The largest producer was a company run by George Burnham and his brother.

As the blog Razed in Milwaukee recounts, George and his brother Jonathan L. Burnham were brick-maker’s sons and New York natives who came to Milwaukee in 1843.  As Megan Daniels recounts: “As early as the spring of 1844, the brothers were making brick in the Menomonee River Valley, the steep banks of the valley proved the easiest place to extract Milwaukee’s stock of clay. After four years the brothers were able to purchase land at North 12th and West Bruce Streets for their own brickyard.”

At the time, Daniels goes on, “brick making was rather arduous work done mostly by horse and hand, but Jonathan, George, and one of their employees, Mr. Marshall patented the first operable brick-making machine, thus revolutionizing the Burnhams’ brick company and the industry at large. The operable brick machine turned out more brick for less cost; consequently the majority of brick for the City’s earliest masonry buildings came from the Burnhams’ brickyard and made the brick available to more than just the affluent.” By 1881, according to Wikipedia, “the Burnham brickyard, which employed 200 men and peaked at 15 million bricks a year, was the largest in the world.”

Another New York native who moved to Milwaukee just three years after the Burnhams, in 1846, was Hiram Ransom Bond. He became a general contractor who helped build many buildings, probably including many built of Cream City Brick. In 1875, he formed a partnership, Bond & Hanchett, with partner William H. Hanchett, to manufacture bricks. They operated a facility later called the Cream City brick works on the north side of the valley at 13th St. The company “employed about 125 hands with a payroll amounting to almost $2800 per month,” according to an account of the Bond family history. “The yearly output of bricks totaled nearly six million.”

The exact location for this photo is hazy, but appears to be at Bond & Hanchett. Note the workers taking a break. Some of them appear to be rather young! The pressed bricks have already been kiln-fired and are awaiting shipment.

“By the 1850’s, word of Milwaukee’s cream-colored bricks had spread throughout the Midwest, and demand increased dramatically,” as one historian recounts, with “most of the outbound shipments being made via scows and tugs leaving the growing docks on” Milwaukee’s waterfront. But with the rise of railroads, all of the brickyards had convenient rail access, which provided another way to ship the popular bricks.

To get an idea of how the “Cream City” looked in its prime take a visit to the outlying communities of Watertown and Whitewater. They have an abundance of 1850s to 1870s Cream City brick structures, commercial as well as residential. This will give an idea of what E. Wisconsin Ave. and Yankee Hill looked like in 1870.