In his speech to the Republican Convention endorsing Donald Trump, Governor Scott Walker argued that thanks to “bold conservative reforms, … today more people are employed in Wisconsin than ever before.” Is there really a causal relationship?

In an article titled, This week we saw that the Republican Party — not just Trump — is the problem, Matt Yglesias pointed out that employment is also at an all-time peak in California, New York, Minnesota, New Hampshire, and Washington, all states with Democratic governors. In each of those states, job growth is more impressive than Wisconsin’s. Yglesias concludes, “As you may have guessed, employment across the United States is at an all-time high. This is true in states experiencing Republican Party government — but also in states experiencing Democratic Party government.”

In the spirit of Walker’s claims here is the percentage job growth since just before the Great Recession (the previous peak) for Milwaukee, the metro area, Wisconsin, and the United States. The result compares the June to May period in 2007 and 2008 to the same period in 2015 and 2016. Using averages smooths monthly fluctuations. These are taken from the Bureau of Labor Statistics’ survey of households which is primarily known for its calculation of unemployment levels; the more commonly-used establishment survey does not report below the metropolitan level. 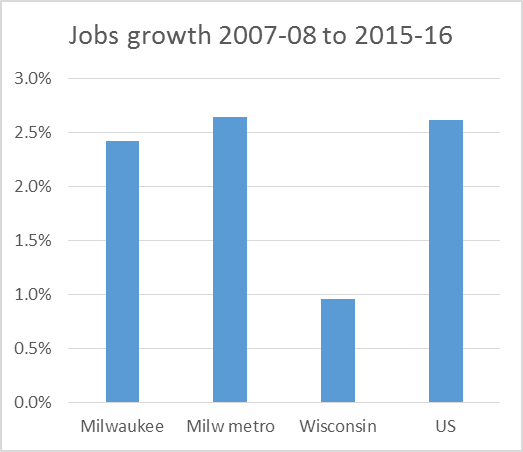 Walker continues to be generous in offering examples of how statistics should not be used. Under his logic, more bragging rights go to Tom Barrett for Milwaukee job growth and to Barack Obama for US growth. Job growth since the start of the Great Recession has been far stronger in the Milwaukee area than Wisconsin as a whole. Milwaukee’s job growth is on a par with the national average, while Wisconsin’s is well below. In reality, of course, it would require far more analysis to establish cause and effect. For instance in recent years there has been a surge of interest in urban living while over half of Wisconsin’s counties lost population.

Part of the secret of Donald Trump’s success has been his ability to appeal to people in parts of the country which are falling behind in the global economy, a pattern that holds in Wisconsin. The following graph shows a tabulation by Wisconsin county of the presidential vote this spring. The vertical scale shows the percentage of total primary voters supporting Trump. The horizontal scale shows the county population in 2015. I chose this number as a proxy for the weakness or strength of the county’s economy. How much of this effect is due to hard times in rural counties and how much to other factors such as distance from talk radio which strongly opposed Trump is unclear. Still, it is consistent with other analyses that find Trump’s appeal is strongest with white men without college degrees who feel their world is slipping away. 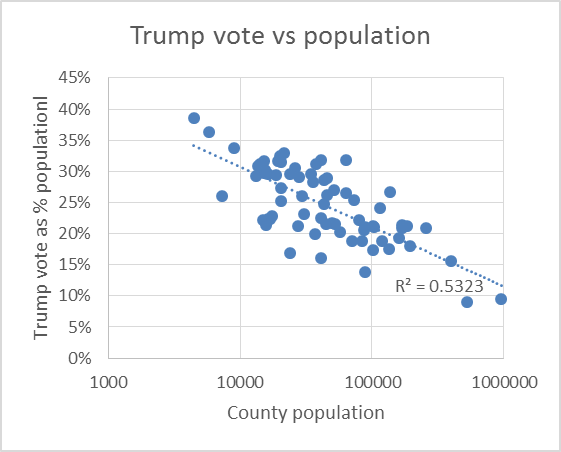 The economist Joseph Schumpeter coined the term “creative destruction” to describe the free market’s process of destroying the old economy structures in order to create a new one. Without this, an economy would stagnate. The problem is that this process creates winners and losers. Trump voters are concentrated in places that are the victims of creative destruction.

In a recent article titled The Republicans waged a 3-decade war on government. They got Trump, the political scientists Norman Ornstein and Thomas E. Mann argue that Trump’s success is the logical outcome of the increasing radicalism of the Republican Party:

Trumpism may have parallels in populist, nativist movements abroad, but it is also the culmination of a proud political party’s steady descent into a deeply destructive and dysfunctional state.

While that descent has been underway for a long time, it has accelerated its pace in recent years. We noted four years ago the dysfunction of the Republican Party, arguing that its obstructionism, anti-intellectualism, and attacks on American institutions were making responsible governance impossible. The rise of Trump completes the script, confirming our thesis in explicit fashion.

In the earlier article, they wrote:

The Republican Party has become an insurgent outlier in American politics — ideologically extreme; contemptuous of the inherited social and economic policy regime; scornful of compromise; unmoved by conventional understanding of facts, evidence and science; and dismissive of the legitimacy of its political opposition.

Among Orenstein and Mann’s points are that the Republicans abandoned compromise, something which is essential in a democracy, that they attacked science and egged on conspiracy theories, and that they stirred up rage they couldn’t control. This describes the party of Walker. These same tendencies have afflicted Republican efforts in Wisconsin.

The MacIver Institute well represents Republican establishment thinking in Wisconsin. Among its recent posts are three that caught my eye because they concern issues covered by this column.

As with Governor Walker’s claims about Wisconsin job growth, MacIver’s posts are tailored to present only the evidence that supports its position. This may be effective politically; it leads to bad policy. For example, President Obama has also noted the need to tweak the ACA to, for instance, to assure that no one would pay a total of premiums and co-pays that exceeded a certain percentage of their income. Before our politics became so toxic, these kinds of modifications in a new program would be common place.

Another example is climate change. By continuing to deny the science, MacIver and the Walker administration, help align Wisconsin with the coal industry. They also abdicate any role in finding solutions to climate change and by opposing a carbon tax betray a lack of faith in the power of the marketplace.

At this spring’s Berkshire Hathaway shareholders’ meeting, its MidAmerican Energy subsidiary presented a video on building a wind turbine. At the later question and answer period, Warren Buffett argued that the company’s investment in wind energy allowed it to have the lowest electricity rates in the Midwest, attracting heavy electricity users such as the servers needed for cloud storage of data, to Iowa.

On its website, MidAmerican describes its plan to further expand its wind energy from 47% to 58% of its retail sales as the “the largest economic development project in Iowa’s history.” A few weeks ago Alliant announced it would spend $1 billion to expand wind energy in Iowa. Iowa is one of the few states with a Republican governor that has not joined Wisconsin in suing the EPA for its Clean Energy Plan.

The dominant theme of the Data Wonk columns is that policy should be anchored by evidence—whether the issue is charter schools, creating jobs, climate change, Obamacare, or the John Doe investigation. It is very dangerous to select only the evidence that supports a particular ideological position.

One danger of ignoring evidence that runs counter to one’s policy preference is the creation of ideological bubbles. The only criticism on the MacIver attack on Harry Reid, for example, is to defend Joe McCarthy.

The problem with the Republican Party in recent years is that it has become less and less a conservative party—skeptical of unproven claims–and more a radical party, picking only the evidence it is comfortable with. Its nomination of a con man like Donald Trump is the logical outcome of this process.

By creating an environment where ideology dominates evidence, the Republican Party left itself open to the evidence-free appeal of Donald Trump.

One thought on “Data Wonk: Trumpism”