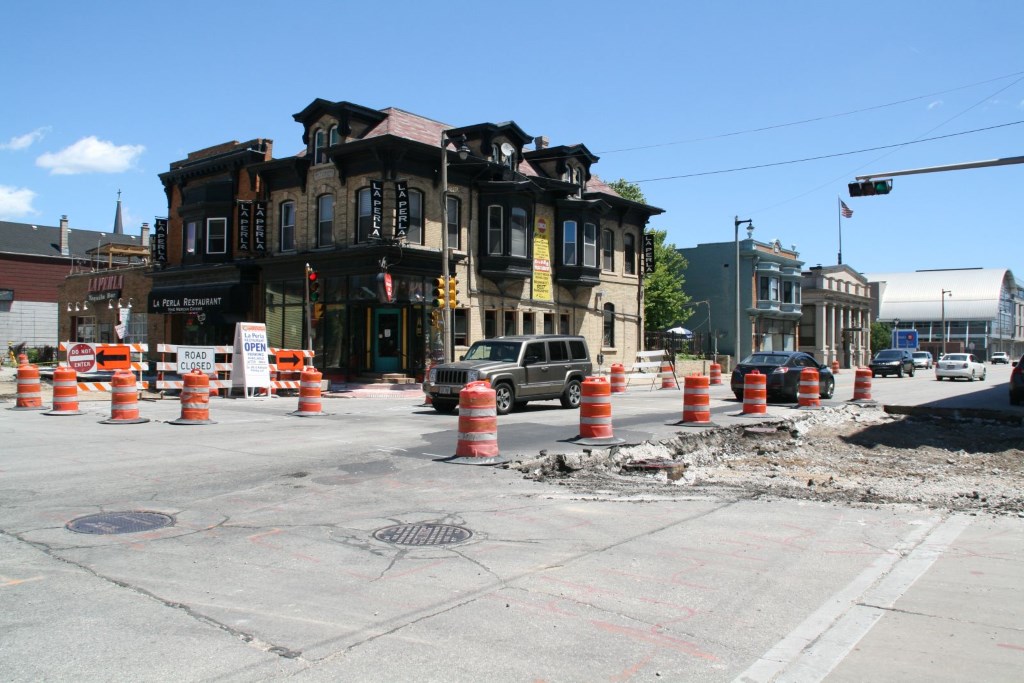 The Third Ward will soon be welcoming a new Chinese-American restaurant to the neighborhood. DanDan is set to serve the public on July 29, under the leadership of chefs Dan Jacobs and Dan Van Rite, who conjoined their first names in naming the restaurant.  Along with business partner and former ManpowerGroup CEO Jeffrey Joerres, the chefs plan to use locally grown ingredients to appeal to customers. DanDan can be found at 360 E. Erie St. in Milwaukee, near N. Jefferson St. Carol Deptolla of the Milwaukee Journal Sentinel reports:

At the bar, the chefs wanted to be sure the cocktails, wine and beer would work with the restaurant’s food, but Jacobs said he also insisted on a personal favorite, frozen banana daiquiris.

Other cocktails will include variations on tiki drinks, and the brandy Alexander will be prepared as a bubble tea. The house cocktail will be on tap; called the Mule Lake Moon, it is meant as a tribute to Milwaukee’s sister city in China, Ningbo.

Milwaukee has recently seen a boom in microbreweries, and the latest, the Explorium Brewpub, to be located at 5300 S. 76th St. in Greendale, plans to open by the end of 2016. Lori Fredrich of OnMilwaukee.com caught up with co-owner Mike Doble to offer more details:

“The layout fit what we needed exactly in terms of the kitchen.” he says. “And with the addition of an adjacent tenant unit, we’ve been able to design just the sort of dining area we envisioned.”

Pair that with a built-in audience and plenty of parking, and Doble says he was sold.

“Maybe it’s not as sexy and cool as an old historic building,” he notes. “But it’s practical and it works. And I’m excited about the potential.”

Explorium will feature both a full-service restaurant and an onsite brewery, along with a 2,000-square foot patio. And it will, notes Doble, be a place he hopes folks will gather to “explore, taste and discover” the joys of craft beer.

In April, Kasana restaurant in the Third Ward announced it would close and seek a new locations. Meanwhile, it will to the pop-up dinner (and brunch) route, serving up empanadas and other tasty dishes on the patio at Great Lakes Distillery this summer. Several weekend dates have already been scheduled at the distillery for Kasana’s arrival (July 29-31 and August 5-7). Ana Docta, owner of Kasana, announced the pop-ups would go on whether in rain or shine. Deptolla describes the menu in more detail:

Docta will serve her empanadas ($6) and prepare grilled Argentine dishes on the patio at the distillery, 616 W. Virginia St., on Friday and Saturday nights, and on Sundays Kasana will prepare a brunch buffet with eggs made to order.

She’ll offer plates such as choripan ($7), chorizo on bread with sides of tomatoes, pickled vegetables and chimichurri, vegetable kebabs ($8) and lamb chops marinated in the distillery’s Kinnickinnic whiskey ($13) and beef ribs ($11), both served with potato salad and chimichurri.

Cocktails will be poured in the distillery’s tasting room.

The Brewers’ Hill building at 234 E. Vine St. in Milwaukee will soon be remodeled to be the home of an “urban Cracker Barrel” eatery and boutique. The building will host a breakfast tavern, Uncle Wolfie’s Breakfast Tavern, and a lifestyle boutique named Orange and Blue Co., which currently only operates online. The historic building was originally owned by Miller Brewing Company and was constructed in 1902. Whitney and Wolfgang Schaefer purchased the building a year ago. Larissa Garza of the Milwaukee Journal Sentinel reports:

Whitney had dreams of opening her own boutique with her longtime friend and now business partner, Anne Madison. The two launched Orange and Blue Co., a lifestyle boutique, last month. It’s operating online now and should be opening in the Vine St. storefront in time for the holidays.

In addition to being under the same roof, the two businesses — boutique and breakfast tavern — will be intertwined, not unlike a Cracker Barrel, Whitney said.

Phoenix Burger LLC has bought the recently closed La Perla Mexican Restaurant in Walker’s Point for $1 million. Phoenix Burger is related to Milwaukee-based company Phoenix Investors, LLC. Word has it the La Perla space may soon become the location for a Hamburger Mary’s, the popular Bay View franchise restaurant that has locations in many other cities. Melanie Lawder of the Milwaukee Business Journal offers more details on the sale:

The La Perla building, at 735 S. Fifth St., was sold for $452,000 and a related piece of property at 717 S. Fourth St. was also purchased for $548,000. David Marks, managing director of Phoenix Investors, and Ryan Trost, executive vice president of finance at Phoenix Investors, were listed as the grantee agents on the deeds.

Known for its Mexican dishes, mechanical chili pepper ride and highly visible advertisements around town, La Perla’s owners Nick and JoAnne Anton announced last week that the restaurant would close after more than 20 years and be sold.

The owner of the popular Milwaukee burger chain, Dave Sobelman, had announced plans for a new Sobelman’s franchise at 3747 Cedar Creed Rd. in West Bend, but those plans have fallen through. Many months of planning left Sobelman with a difficult decision, but he plans to get, “at least one or two franchise deals completed by the year’s end,” he told the Business Journal.  Lauder adds more:

As for potential franchise operators, Sobelman said he’s looking for somebody who already has a healthy portfolio of restaurant units under their belt and is interested in adding a unique restaurant to the mix.

“We’re looking for multi-unit operators, people with experience so we can fast-track the opening,” he said. “…This is a one-shot deal for a guy who just wants something a little different and just wants to have a little fun with it.”

Dave Sobelman opened what would become Sobelman’s with his wife, Melanie, at 1900 W. St. Paul Ave. in Milwaukee about 17 years ago. They later opened a location adjacent to Marquette University‘s campus and in the summer of 2015, Sobelman’s made its debut outside Milwaukee with a Mequon location.