All-American diner has huge menu, great burgers and tons of choices for lunch or breakfast. 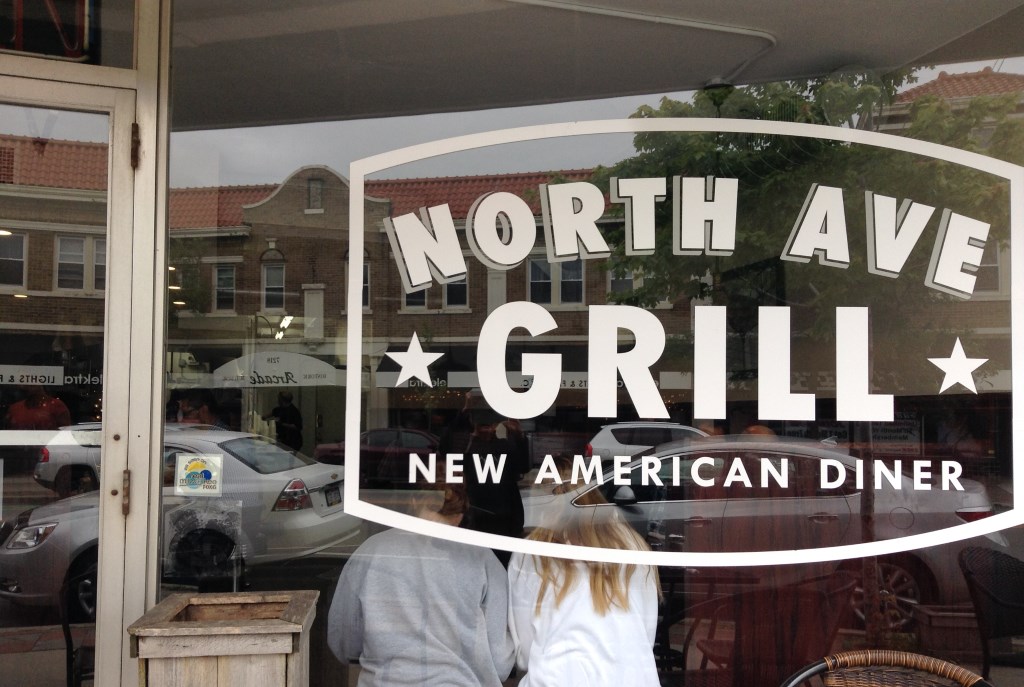 In April I drove across Iowa, Nebraska, and Colorado, on the way to camp by the Colorado River close to Moab. My friend and I agreed to boycott the ubiquitous franchise restaurants that popped up at every exit. We anticipated a plethora of local diners, grills and bars with burgers and fries in small towns scattered across the prairie states. I had Milwaukee’s North Ave. Grill in mind, a place where customers sit at the counter to watch grill chefs flip burgers while they drink coffee and share local gossip.

For mile after mile we often left  I-94 only to find “Restaurant Closed” signs when we came to Main Street in towns close to the freeway. In too many places, franchises have strangled the diners, dives, and drive-ins.

In Milwaukee, or more accurately Wauwatosa, we have the recently enlarged North Avenue Grill, a classic diner, with more booths, more counter space, a bigger kitchen, and a menu so long it’s a study in everything that could potentially begin or end on a grill. It’s reassuring to know places like this continue to attract hordes of people, hungry for an authentic taste of honest, simply prepared food, devoid of froufrou.

Take the breakfast menu for example, a list of so many choices it almost seems impossible that the relatively small kitchen/grill area can turn out that many dishes with any degree of quality control. Except that they do, seven days a week, thirteen hours every day but Sunday when they work a short eight-hour day.

When examining this extensive breakfast menu, customers will need to take a deep breath before diving in because it’s lengthy and requires serious deliberation. The Corned Beef Hash might be the best hash in the city, a pile of crisp potatoes surrounded by chunks of delicious corned beef. There’s enough tender meat for a second meal when combined with the two eggs cooked to order that accompany the hash. Eggs Benedict come three ways, with ham, pulled bacon, or pork belly, while Breakfast Skillets combine pulled short ribs or pastrami with American fries. A Meat Lover’s Omelet will satisfy the most voracious carnivore with bacon, sausage, ham, and steak wrapped inside three eggs.

Lunch, no less impressive, packs the grill on weekdays from 11:00 a.m. to 2:00 p.m. If you get there before 11:00, you can get a booth, but show up at 11:30, especially on a Monday when many restaurants are closed, and plan to wait. When customers arrive, names go on a list. There are no group reservations.

Sandwiches and wraps come with a choice of hand-cut fries, coleslaw, or fruit, while with the Pick Two Combo, half a sandwich adds a house salad or soup du jour to the mix. I found the combo, Pulled Pork and Slaw on ciabatta slightly disappointing. I had no quibble with the meat, but the slaw soaked the bread, making a mushy half. The accompanying White Bean Sausage Soup du jour had rich flavor from good stock and enough sausage to call it a meat soup. The French Dip with French Onion au jus, stuffed with tender slices of beef, came with caramelized onions, peppers, and melted provolone inside the bun, plus more onions in the dip to layer on top of the sandwich. 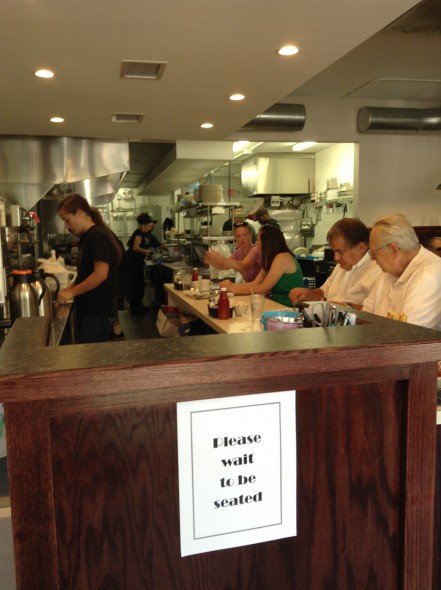 The Mozzarella Chicken Wrap, a mash-up of grilled chicken, spinach, and tomatoes, with pesto, mozzarella, and balsamic dressing, made a crisp fresh healthy lunch with many complementary flavors to ponder. Another chicken sandwich, the Cordon Blue adds ham, melted baby swiss, and garlic bistro sauce to crisp chicken, breaded with panko crumbs and deep fried. Combined with the garlic bistro sauce, it was so delicious it didn’t need the ham and cheese, but then they couldn’t call it a cordon blue.

From the salad menu, Crispy Buffalo Chicken Salad, basically a Cobb minus the hard-boiled egg and avocado, came topped with a pile of panko-breaded chicken bites tossed in buffalo sauce. The cup of ranch dressing helped cool the spicy chicken, enough bites for two along with the tomato, onion, cucumber, and abundant bleu cheese.

From the burger menu, diners can get creative and build their own, or go with something chef-inspired like Fiery Jalapeno Popper, Peppercorn Honey, and Black and Blue. The coup de grace, the Belly Buster, loaded with pork belly, bacon aioli, cheddar jack cheese, and a fried egg, also has lettuce and tomato in the mix, perhaps to add a faux healthy postscript to the burger.

Even picky eaters can expect a well-executed meal at the Grill and big eaters who don’t want to leave hungry will find the portions generous. When the hostess says, “We’ll put your name on the list. It’s a 30-minute wait,” it’s because the Grill has earned their clientele, one juicy burger at a time. 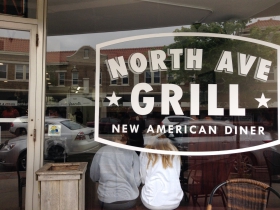 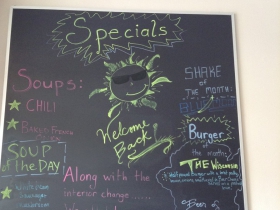 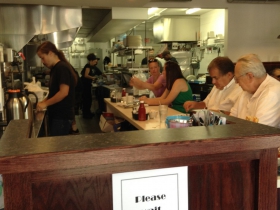 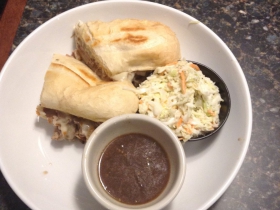 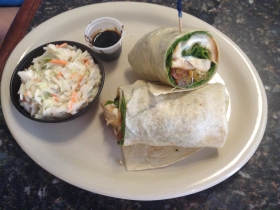 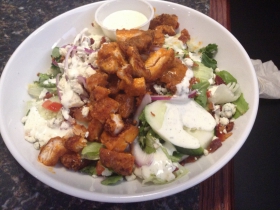