The World According to Janel Brandtjen

Republican lawmaker is angry about crime in the city. Here’s how she could help. 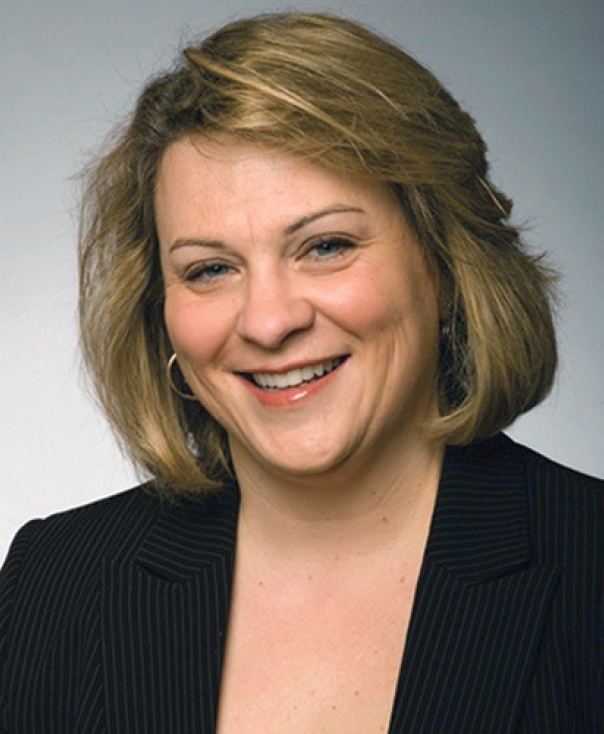 State Rep Janel Brandtjen (R-Menomonee Falls) is a woman on a mission. The no-nonsense legislator, serving in her first term, spoke last fall on the Assembly floor in support of a bill cutting off all funding to Planned Parenthood, charging that it encourages “young women with promiscuous lifestyles.” She is an NRA member and was a co-sponsor of the law allowing certain officers to carry firearms at schools. She was named Pro Life Wisconsin’s “Legislator of the Year,” and in response declared that “America is strongest when we observe the Judeo-Christian roots that our forefathers put forth as unalienable rights.”

And Brandtjen made a huge splash in the media this week with her call to cut state funding to Milwaukee because of a “growing and out of control problem” of crime she blamed on Mayor Tom Barrett. As she put it, “Mayor Barrett may not care about the safety of his family but I certainly do care about mine.” Did it occur to her that Barrett is the man who saw to his family’s safety and then was badly injured trying to defend a woman from a “vicious thug,” as police described the criminal, back in 2009?

Brandtjen attended Marshall High School in Milwaukee and her district actually includes a portion of Milwaukee, but her press release had no concern or praise for that part of her district, while expressing worry about homeowners in the “flourishing suburbs” in the portions of Washington and Waukesha counties she represents. 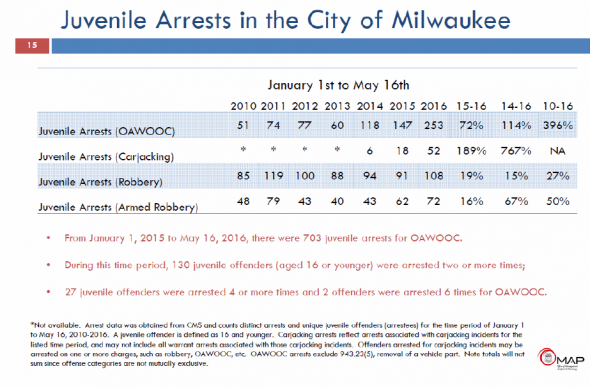 Juvenile Arrests in the City of Milwaukee

Brandtjen’s blast came in the wake of a high-profile Milwaukee carjacking that ended with a chase into Washington County and the arrest of five juveniles. Barrett, she charged, has failed to “apprehend and arrest car thieves.” In fact, the crime statistics for Milwaukee show that arrests of juveniles for auto theft is up by 396 percent since 2010, while arrests for carjacking are up by 796 percent in the last two years.

Brandtjen also condemned Barrett for not “standing up to the judges who let repeat offenders off easy.” It’s a strange charge, since the criminal justice system is not overseen by the city, but by the state, with counties operating as the local administrative arm of the state. Her beef is with the state and county, not the city.

As for demanding “prison for repeat offenders,” another Brandtjen solution to the problem she says Barrett must embrace, both the mayor and Milwaukee Police Chief Edward Flynn have repeatedly asked the legislature to go after criminals with guns, making it a felony the second time a felon is arrested carrying a gun. The legislature declined, but Brandtjen could choose to sponsor such a bill. 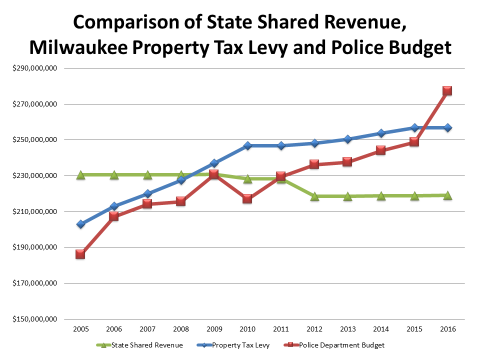 Brandtjen also criticized Barrett for failing to hire enough police. In fact, the mayor and Common Council have devoted an ever-increasing portion of the city’s budget to the Police Department. The police budget has risen from just less than $190 million in 2005 to $280 million in 2016, while the property tax levy rose at about half that rate. The problem city officials have faced is a huge, long-term decline in state shared revenue, which dropped 36 percent in real dollars from 1995 to 2014. It’s a cinch that Barrett and the council would happily spend more on police officers, should Brandtjen convince her legislative colleagues to begin restoring shared revenue to cities.

The biggest issue driving crime in Milwaukee is gun violence. Barrett and Flynn have argued for common sense legislation that could help reduce access to guns, including:

-Criminal background checks for all gun sales, something that 81 percent of state residents favor, according to a Marquette Law School poll.

-Prohibit habitual criminals from qualifying for a conceal carry license.

-Prohibit a felon from being within 1,000 feet of a gun store.

But the legislature has declined to enact any of these measures, instead passing a law last year ending the 24-hour waiting period to buy a gun. The law had been in place since 1976. Perhaps Brandtjen could get her colleagues to reconsider such policies.

When Brandtjen contrasts the flourishing suburbs with the city, she is surely aware this is no accident, but is the result of suburban policies that require lot sizes for homes that assure only solidly middle-class people can afford homes while fighting the creation of any low-income housing. Cities, by contrast, have no such barriers and across America tend to have concentrated poverty and crime. And few metro areas have more spatial inequality than Milwaukee, as a recent study found.

So you might think Brandtjen would be grateful for this situation, which has left the city with most of the metro area’s poverty and the myriad of problems associated with it. Instead she wants to cut the city’s funding even more, which will hurt all its residents, including some of her own constituents.

34 thoughts on “Murphy’s Law: The World According to Janel Brandtjen”