The Old Man and the Reeds 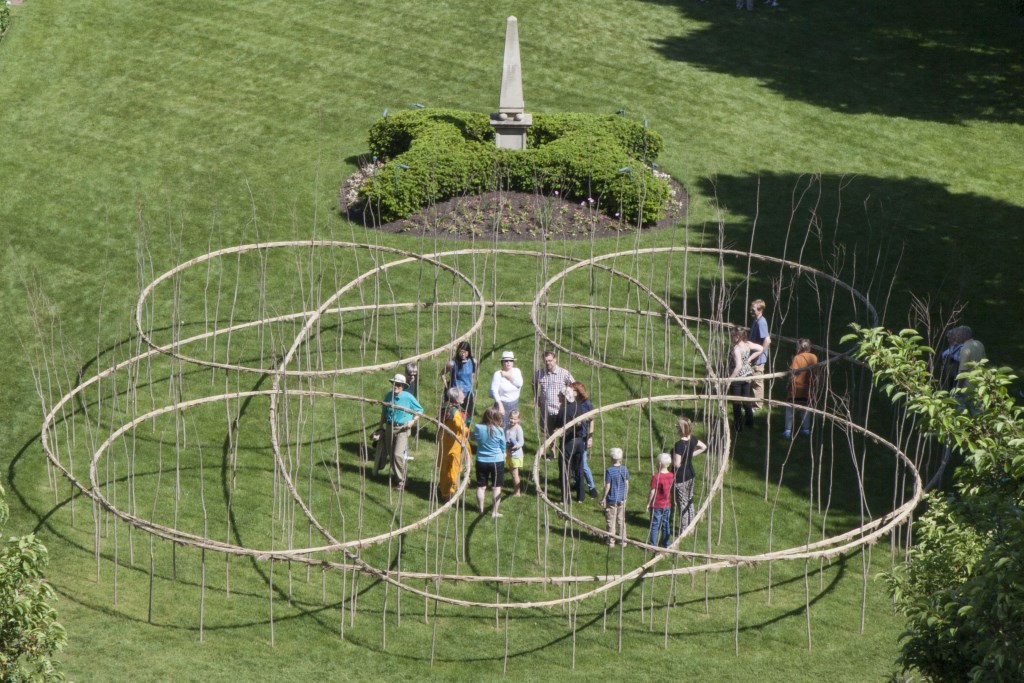 Roy Staab, 74, always wears flip flops, but they sometimes break so he is now barefoot as he leads me from the upper balcony of Villa Terrace to the lower part of the garden heading down toward the lake. His new installation, “Shadow Dance,” which takes up most of the space in the lower portion of the Villa Terrace, is made of willow reeds and branches which form intersecting circles. “Look, look, see how the forms are changing from ovals to circles, see how the angles of the forms shift as we get closer,” he explains, “it’s all about the perspective.” 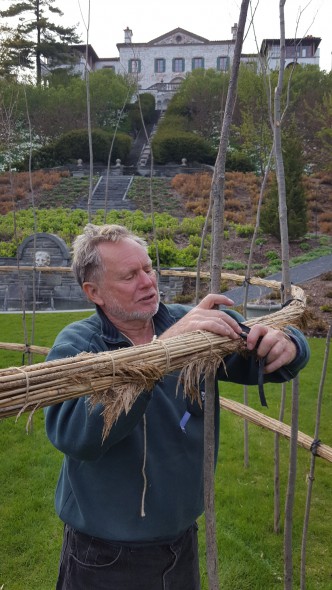 His almost boyish energy and enthusiasm are infectious, but his work is quieter and overtakes you gradually. He always uses materials from nature — reeds, willow shoots and bamboo — and always locally sourced, to create sculptural installations using plant materials that overlay and yet echo the natural world. In this case he collected sand willow branches from an abandoned airport near 76th and Ryan, he says, and reeds from the sides of freeways in Milwaukee. He carefully considers the colors and texture of the material, and may soak them in water to make them easier to bend into the shapes he needs. He bundled reeds together for certain parts of this installation.

At first glance, his installation really shakes up the classical symmetrical and oh-so-lovely balance of the Villa Terrace. But if Staab is a shaker upper, there’s also an axial symmetry and classical balance in his works. Yet his use of natural materials — he has a profound respect for nature — and rejection of the geometrically straight lines emphasized in Villa Terrace make all the difference.

Staab’s artistic vocabulary is all about circles, ovals and curves. There are “no straight lines in nature,” Da Vinci once said, and Staab echoes this, saying “a bent line is stronger than a straight one.” He mentions influences like the formal gardens he saw in Iran, which go back thousands of years and used a central axis, with everything radiating from that point.

The title of his installation, “Shadow Dance,” signals can look very different depending on nature and the sunlight and shadows of the day. The title also references Matisse‘s “Dance,” a painting of figures dancing in a circle which Staab saw in Leningrad. There will actually be dancing within and around Staab’s installation in September, when choreographer Debra Loewen creates a site-specific piece for her Wild Space Dance Company here in September.

Staab is a Milwaukee native, but an international artist who has created installations in Poland, Italy, Finland, India, Brazil, Canada, Costa Rica, Japan and Korea, not to mention Chicago, New York, Massachusetts and and the Lynden Sculpture Garden in Brown Deer. He mostly studied Medieval and Renaissance art at UW-Milwaukee and learned contemporary art on his own. “Education should prepare one to learn,” he says. 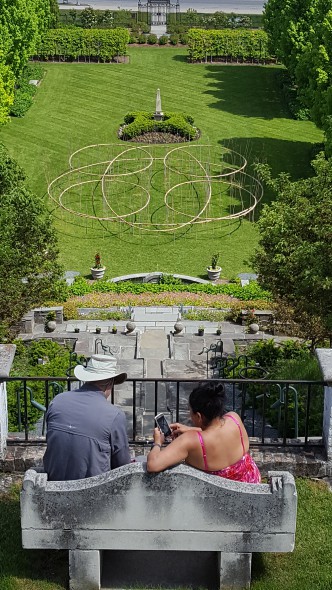 While his work bears some relationship to outdoor installations by artists like Christo, Andrew Goldsworthy and Robert Smithson, they tend to impose their art on on the landscape, remaking nature with bulldozers and the like to create their installations. Staab does everything manually and creates works which complement nature and can be naturally reabsorbed  back in to the landscape. He does not cut down living material but uses what has been left from the previous growing season. Staab cites David Nash, the British environmentalist sculptor who uses fallen trees in his work, as a kindred spirit.

Staab’s work is not precious. You can walk into “Shadow Dance” and touch the materials (but don’t hang on his delicate creations) and feel its textures.

Whether seen close up or from the terrace above, it’s a wonderful work of art: rustic yet elegant, ephemeral yet powerful. It creates a bracing contrast to the formal gardens of Villa Terrace, almost a commentary on them, yet it also feels complimentary.  There is a formal sculptural quality to the work, and yet it also has a humble quality, of an artist making everything with his own hands.

“Shadow Dance” runs through September 19 at the Villa Terrace Museum, in conjunction with “Suspended in Time,” an exhibition documenting Staab’s work across the globe through gorgeous large photographs, which I also highly recommend. And a third show, “Beyond Baskets,” is a lovely exhibit of contemporary basket-making from the collection of Jan Serr and John Shannon, with the selections made by Staab, who operated as curator and says “These works are unique, express geometry and simplicity, and touch some of same themes as my own work.”

3 thoughts on “Art: The Old Man and the Reeds”