Hamilton and 11 other aldermen call for “holistic approach” to gun violence.

By Jabril Faraj, Milwaukee Neighborhood News Service - Jun 8th, 2016 10:13 am
Get a daily rundown of the top stories on Urban Milwaukee 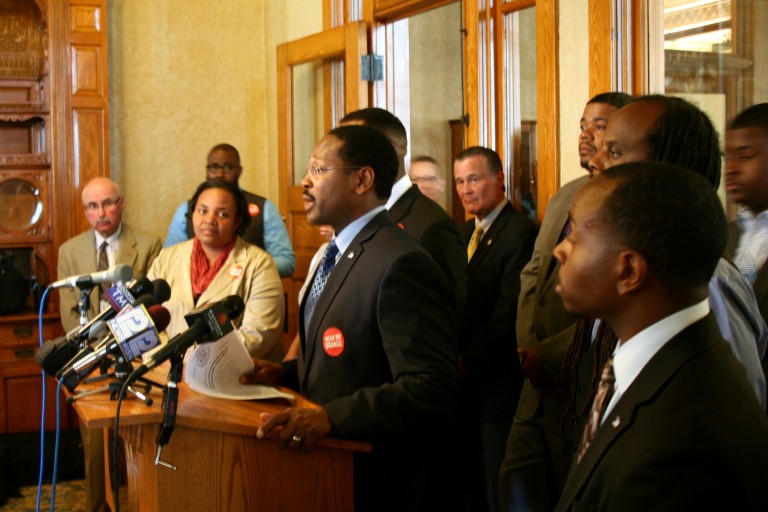 Milwaukee Common Council President Ashanti Hamilton and all but three city aldermen announced a multi-pronged approach to curbing violence in Milwaukee over the summer. Though the effort will include the Milwaukee Police Department (MPD), Hamilton said it will focus on fighting crime by starting at the community level.

“This is an effort to take a holistic approach to what the quality of life should be in [the] communities that we all represent,” he said.

Aldermen Michael Murphy, Bob Bauman and Nik Kovac, who represent the far West Side, downtown and East Side, respectively, did not attend.

Milwaukee saw 153 homicides in 2015; 125 of those were gun deaths. In 2009, fewer than 45 percent of black males in Milwaukee were employed, according to a report by UW-Milwaukee professor Marc Levine. Milwaukee’s poverty rate is almost twice the national average, and more than 40 percent of Milwaukee children live in poverty.

The initiative will engage community members, churches and pastors in Milwaukee’s most challenged neighborhoods, with the goal of identifying at least 500 fathers to positively influence their families and communities.

The Public Safety Committee will also hold a series of meetings with civic agencies, including the Milwaukee County District Attorney’s Office (June 10), Milwaukee County Sheriff’s Department (June 24), local courts and judges (June 27) and the Office of Violence Prevention (July 11). A meeting with MPD already took place. All meetings are open to the public.

Though the official call is to fathers, Ald. Russell Stamper said every individual needs to do what he or she can. “Everybody should be in this,” he added. Stamper represents District 15, which encompasses the 53206 ZIP code, Milwaukee’s poorest.

“Alderman Hamilton and I have long worked on addressing crime in the community through … ways other than law enforcement,” said Ald. Terry Witkowski, who represents District 13 on Milwaukee’s South Side. “We know that it takes a community to affect a community — it takes neighbors working with neighbors.”

The Milwaukee Fatherhood Initiative (MFI) will partner with the Common Council to organize the “500 Fathers” initiative. A launch event hosted by COA Youth & Family Centers will be held June 17 at Moody Park in the Amani neighborhood. Dennis Walton, a resident of Amani and outreach coordinator with MFI, said he hopes to create a database of individuals who can be called on to “go into a specific community to address certain issues and interact with the community,” when needed.

“A lot of the work that’s not being done is the grassroots work — organizing in the neighborhoods, in the communities, where the issues are happening,” Walton said. 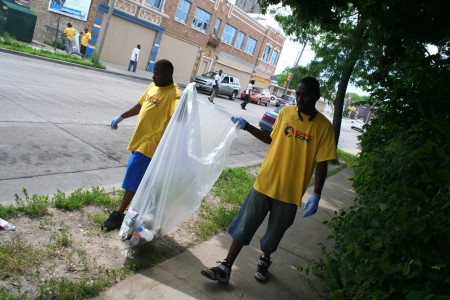 Hamilton called the initiative “a place-based strategy” and charged community organizations to take more responsibility and help to displace negative activity with positive activity. He also said it’s important to have an idea of what’s going on in a community, and to know who is creating problems and who is at risk.

Hamilton added, “Too often, when we go into a community not knowing … we have a negative effect.”

In addition, several previously approved initiatives will be a key part of efforts to improve conditions in central city neighborhoods. The Safe Zones initiative, sponsored by Hamilton and piloted last year, will place neighborhood ambassadors in the Garden Homes and Franklin Heights neighborhoods to mediate conflicts and help build community. A program sponsored by Ald. Milele Coggs, who represents much of the near North Side, including Harambee and Bronzeville, will offer financial aid so nonprofits can purchase foreclosed homes to use as community resource centers.

Stamper is leading an effort to revamp the city’s Residents Preference Program to ensure residents of the most distressed neighborhoods are hired on large development projects. He also said the city will again expand the successful Earn & Learn program, which employs youth over the summer. After adding 200 spots to the program last year, he hopes to add another 200 openings this summer. Last year there were about 2,700 youths on the program’s wait list.

Public Safety Committee Chair Ald. Bob Donovan also presented a letter that was delivered to Mayor Tom Barrett, urging him to include funding in his 2017 budget to replace 235 MPD officers who will be eligible for retirement in the next two years. The June 1 letter was signed by all the aldermen present, except Witkowski. While Donovan doesn’t think every one of those officers will retire, he said it’s still a concern.

“That is a huge and significant number,” said Donovan. “Officers with 25 years’ experience are not easily or quickly replaced.”

Barrett and MPD Chief Ed Flynn were not at the press conference, though Hamilton said Barrett has “been involved in many parts of this conversation” and Flynn is aware of the initiative.

The Common Council is hoping to recruit 25 churches to aid in the initiative, and has already targeted particular congregations based on location, according to Ald. Chantia Lewis. Lewis, who will lead the effort, said at least one church had agreed to participate so far.

Malcolm Hunt, an elder at Least of These International Ministries and part of Pastors United, has worked with pastors and police to provide counseling and immediate support for families affected by gun violence. He said it will be difficult to get churches involved because they don’t trust Barrett and Flynn. Hunt also said the faith-based community itself is divided.

“[It] depends on who approaches them, asks them to do it — that’s the key,” said Hunt. “The person has to be real.”

Walton urged the community to start working right away. “If we could get $1 million, or $2 million, or $500,000 to support what we’re doing, we would welcome it. But, because we’re in a state of emergency, we don’t have time to wait for … approval,” said Walton. “We can’t have any more 9-year-old girls being shot in the face by stray bullets.”